The Bizarre Story of the Man Who Invented Ransomware in 1989 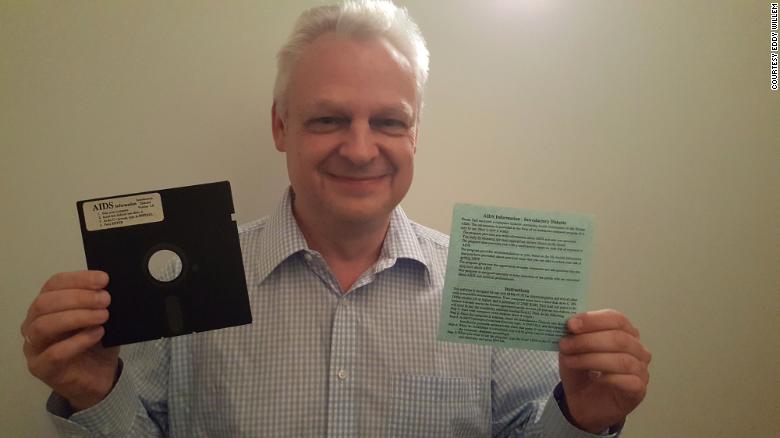 To this day no one is sure why he did it, but in 1989 a Harvard-taught evolutionary biologist named Joseph Popp mailed out 20,000 floppy discs with malware on them to people around the world. At the time he was doing research into AIDS and the discs had been sent to attendees of the World Health Organization’s AIDS conference in Stockholm.

Eddy Willems was working for an insurance company in Belgium and his boss asked him to see what was on the disc…
CNN picks up the story:Willems was expecting to see medical research when the disc’s contents loaded. Instead he became a victim of the first act of ransomware — more than 30 years before the ransomware attack on the US Colonial Pipeline… A few days after inserting the disc, Willems’ computer locked and a message appeared demanding that he send $189 in an envelope to a PO Box in Panama. “I didn’t pay the ransom or lose any data because I figured out how to reverse the situation,” he told CNN Business.

He was one of the lucky ones: Some people lost their life’s work.

“I started to get calls from medical institutions and organizations asking how I got around it,” said Willems, who is now a cybersecurity expert at G Data, which developed the world’s first commercial antivirus solution in 1987. “The incident created a lot of damage back in those days. People lost a lot of work. It was not a marginal thing — it was a big thing, even then…” It’s unclear if any people or organizations paid the ransom.
CSO reports that Popp was eventually arrested and charged with multiple counts of blackmail after law enforcement identified him as the owner of the P.O. box where the ransom checks were to be sent.

CNN adds that “One of the biggest problems about ransomware nowadays is that ransoms are often paid with cryptocurrency, such as bitcoin, which is exchanged anonymously and not traceable.”

An inspiration for most Americans