[SOLVED] How to Restore a Software Trial Stored on a Computer

If I reinstall my computer, I can get most software trials again. Is there a way to delete something or change the computer ID to get a trial again?

There are a lot of software which can be use to reset trial or extend evaluation period for a shareware softwares. 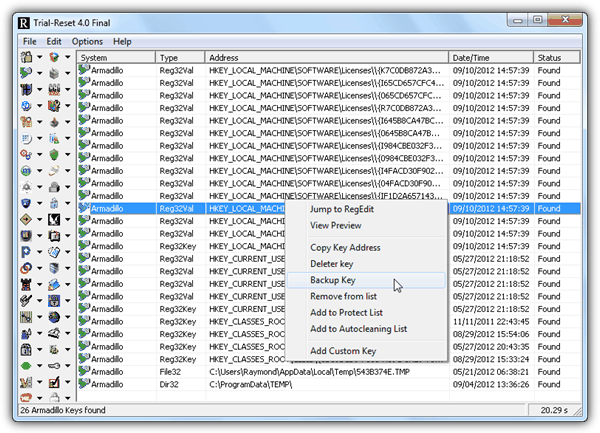 Trial Reset 4.0 RC is a software which allows you to reset trial period for a software. It will delete all the history and registry entries for a software to extend its evaluation period . It is not a crack tool, but a hack which can be use to delete the trial license key and install fresh license key. Or in other words it restart the trial period for a shareware software. If you want to use this software, then you must have VB6 Run Time and Common Control ActiveX 6 installed in your computer.

This is the final version released in 2010 by “The Boss”, and is able to scan and remove 45 types of commercial and freeware protections including some software that uses custom protectors such as Reflexive, Namo, ABBYY, WinRAR, WinZip and etc. In fact if you know the registry location of where the trial information are recorded for a shareware program, you can create your own text file and save it in the Lists folder. 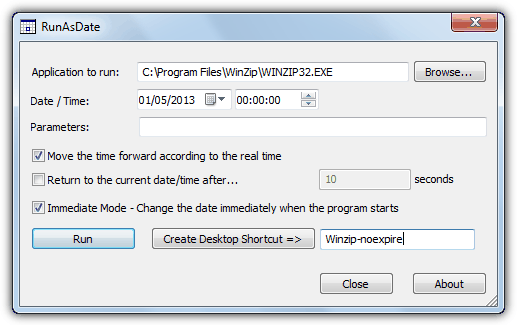 As the name might suggest, RunAsDate performs a trick on the trial software that has expired by injecting the time and date you specify into its process. This has a similar effect to manually setting your system clock to a different time and date, but in this instance your real clock remains unchanged. RunAsDate can also have multiple instances of its program running at once, and each one can have a separate date, all different to the real one. 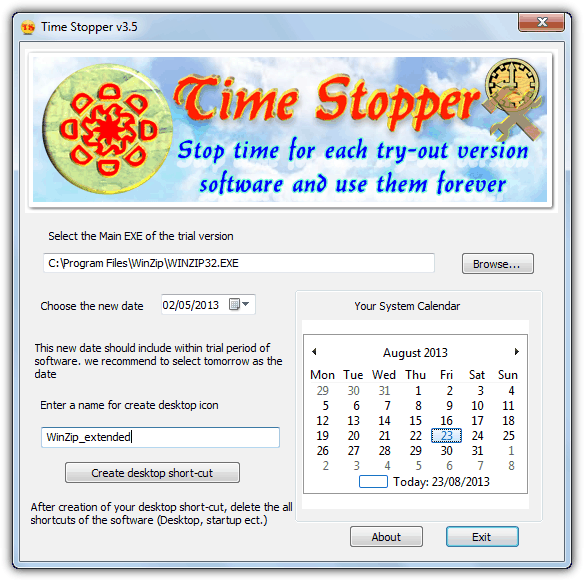 Time Stopper is a program that behaves in a similar way to RunAsDate and fools the expired application into thinking it’s still within the trial period. This tool does differ slightly though because you don’t have the option to directly run the expired program from Time Stopper, but instead it is designed specifically to run from a desktop shortcut with the new time and date injected when you run the program from the shortcut.

This method may not seem that obvious at first, but actually can work quite well in many circumstances. The theory is simple in that you use a standard piece of installation monitor software.

7 Tools to Monitor Software Installs and then Uninstall Removing the Leftovers...

As we know, when software gets installed onto your computer, it copies the needed files and registry entries to the system for the program to function properly. And when you uninstall that same software, most of the time there is useless data left...

which watches the files and registry entries that a program creates when it installs, and then can completely uninstall the software including everything that doesn’t get removed by the standard uninstaller. This often has the effect of also removing registry entries shareware might leave behind to watch its trial expiry status.

As an example, this can be achieved for the Internet Download Manager shareware program when its 30 day trial expires. We happen to know that the trial status of IDM is stored in the registry key “HKEY_CURRENT_USER\Software\Classes\CLSID\{07999AC3-058B-40BF-984F-69EB1E554CA7}”, but IDM doesn’t remove this key when you uninstall through its own uninstaller and the time/date trick doesn’t work. Therefore once the trial period expires, the information remains on your computer and it will stay expired even if you re-install the program again in future.

To demonstrate, we installed Comodo Programs Manager which is one of the better installation monitor’s around, and let it automatically monitor the install of IDM. Then once the trial period for IDM has expired, we simply select it for a “Complete Uninstall” in Comodo Programs Manager. After the standard uninstaller has finished, Programs Manager will show the extra files and registry entries that have been left behind. Expand the Registry tree and looking at the keys, we can see the IDM key which controls the trial period status is listed for removal. Continue the removal and if you re-install Internet Download Manager, its trial status will be reset to 30 days. 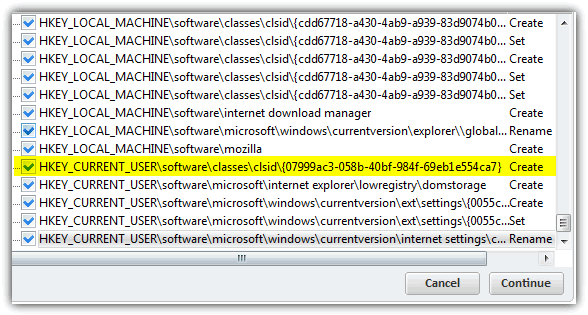 This method is obviously not foolproof but if you can install the trial software for the first time after installing the installation monitor, and the trial information is kept in the registry or a data file, one of these programs has a chance of picking it up and removing it which will reset the trial period.

This might be a better solution these days because it is up-to-date. Unlike the Trial-Reset program which was last updated more than 2 years ago, it may not work on shareware that uses a newer version protector. Although Registry Trash Keys Finder is free, there are some limitations where some of the protection keys are not shown. The full version of Registry Trash Keys Finder is only available after donating to the author of this tool and it removes the limit. 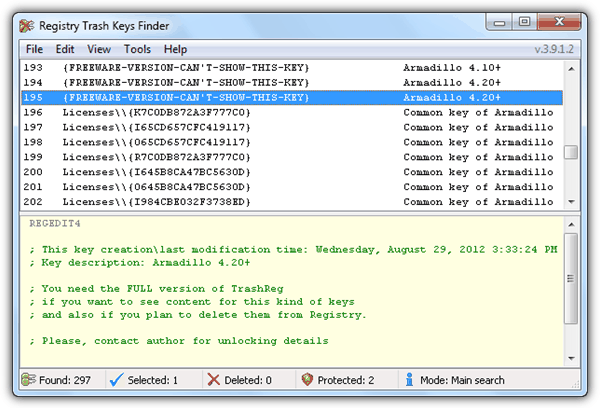 As you can see at the screenshot above, there are 3 registry keys that shows {FREEWARE-VERSION-CAN’T-SHOW-THIS-KEY} for the Armadillo protector which cannot be seen nor deleted. We wanted to test the full version so badly that we donated to get it. From the “what’s new” area, we read that they’ve recently added a search routine for the latest Alawar.com games keys so we decided to put Alawar games to the test.

We downloaded a game from Alawar called Sticky Linky and played the whole free 60 minutes. Once the 60 minutes free play time is up, it shows 0 minutes game time left and we can no longer play the game until we purchase the game.

We ran Registry Trash Keys Finder full version and Alawar came up in the search results. 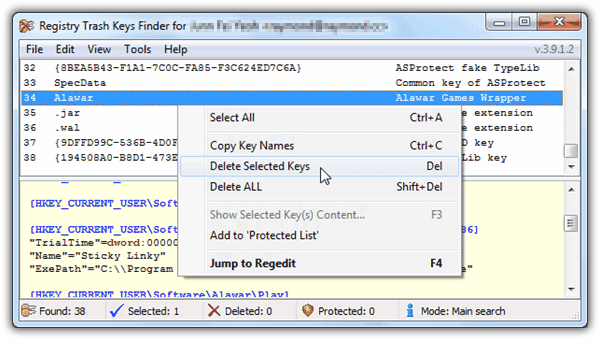 The Alawar key is deleted and running Sticky Linky now gives us another 60 minutes of free game time! 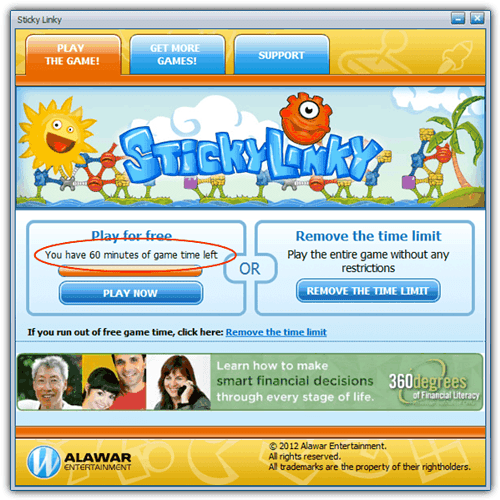 The Registry Trash Keys Finder full version has successfully extended the trial period of a game and it should also work for other software too. Other than just resetting the trial period, it also acts as a registry cleaner/optimizer where it detects obsolete registry keys of uninstall/app paths/SharedDLLs/Installer/MUICache/Help, unused file extensions, empty CLSID and TypeLib key, invalid name of CLSID and many more.