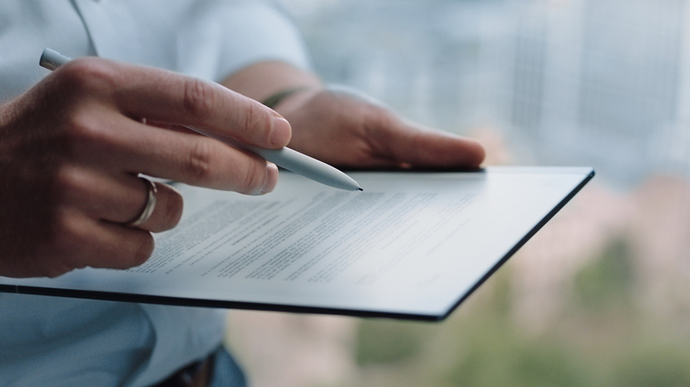 An anonymous reader shares a report from TechCrunch, written by Devin Coldewey: It’s no secret I’m a fan of the reMarkable, a tablet with a paper-like display that’s focused on text and sketching rather than rich media and games. The sequel to the original, announced today, looks to make a good thing even better. Designed for the creation and consumption of monochromatic content like long documents, e-books, notes and sketches, the reMarkable set itself apart as a more minimalist alternative (or complement) to the likes of the iPad or Surface. The device was crowdfunded and has sold more than 100,000 units; meanwhile, the company has grown and attracted a $15 million A round. One sees in retrospect that the money helped launch this successor.

The most obvious change is to the design. It has a bold asymmetrical look with a chrome band along the left side, indicating the tablet’s main use as an alternative to a paper notebook: Hold it with your left hand and write with your right. Sorry, lefties. The new tablet is just 4.7 mm (0.19 in) thick, thinner than the iPad Pro and Sony’s competing Digital Paper tablets, both of which are 5.9 mm. Let’s be honest – at these levels of thinness it’s getting hard to tell the difference, but it’s an accomplishment nevertheless. […] The software running on the reMarkable has received several major updates since the product made its debut, adding things like handwriting recognition, a new interface, better performance and so on. But one of the most requested features is finally coming with the new device: saving articles from the web. The company is claiming a 3x boost to battery life, using the same 3,000 mAh battery, based on performance improvements throughout and a more efficient (but more powerful) dual-core ARM processor. That means two weeks of use and 90 days of standby. This is welcome news, because frankly the battery life and power management on the last one were not great. The reMarkable 2 will sell for $399 if you pre-order, and comes with a Marker and a folio case.