PersistenceSniper | Powershell module that can be used by Blue Teams

PersistenceSniper is a Powershell module that can be used by Blue Teams, Incident Responders and System Administrators to hunt persistences implanted in Windows machines. The script is also available on Powershell Gallery. The tool is under active development with new releases coming out by the week, so make sure to use the up-to-date version!

Why writing such a tool, you might ask. Well, for starters, I tried looking around and I did not find a tool which suited my particular use case, which was looking for known persistence techniques, automatically, across multiple machines, while also being able to quickly and easily parse and compare results. Sure, Sysinternals’ Autoruns is an amazing tool and it’s definitely worth using, but, given it outputs results in non-standard formats and can’t be run remotely unless you do some shenanigans with its command line equivalent, I did not find it a good fit for me. Plus, some of the techniques I implemented so far in PersistenceSniper have not been implemented into Autoruns yet, as far as I know. Anyway, if what you need is an easy to use, GUI based tool with lots of already implemented features, Autoruns is the way to go, otherwise let PersistenceSniper have a shot, it won’t miss it

Using PersistenceSniper is as simple as firing up Powershell as Administrator and running:

If you prefer sticking to the Powershell Gallery version (which is automatically updated through a Github action every time a new version is pushed here on Github), open up Powershell as Administrator and run:

If you need a detailed explanation of how to use the tool or which parameters are available and how they work, PersistenceSniper’s Find-AllPersistence supports Powershell’s help features, so you can get detailed, updated help by using the following command after importing the module:

The PersistenceMethod parameter uses Powershell’s ValidateSet directive, so you can tab through it instead of writing down the persistence method of choice.

PersistenceSniper’s Find-AllPersistence returns an array of objects of type PSCustomObject with the following properties:

This allows for easy output formatting and filtering. Let’s say you only want to see the persistences that will allow the attacker to regain access as NT AUTHORITY\SYSTEM (aka System): 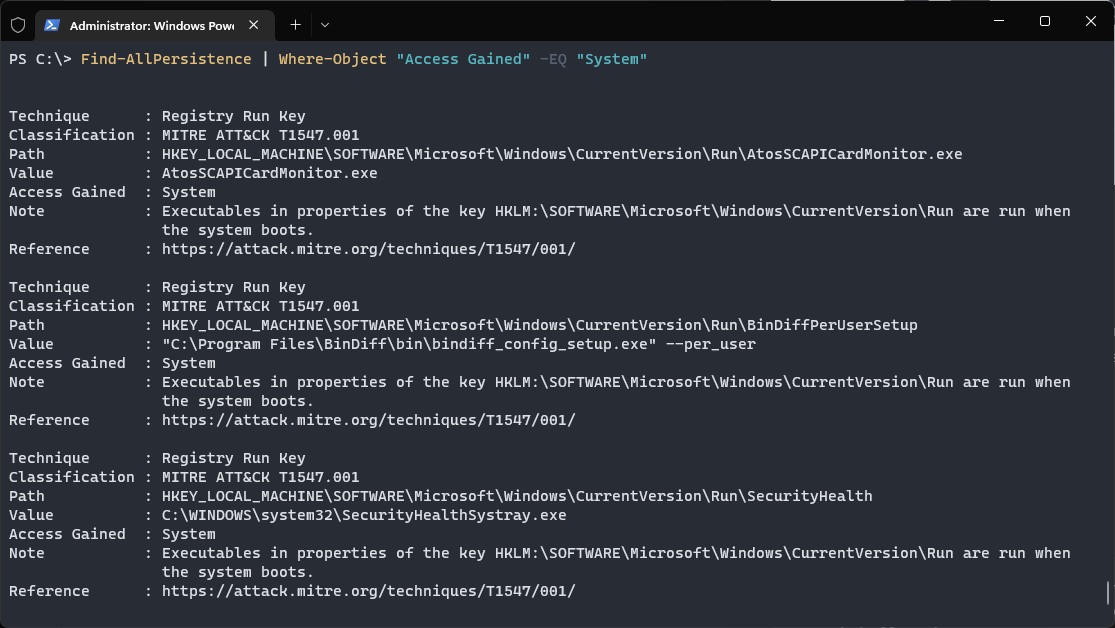 Of course, being PersistenceSniper a Powershell-based tool, some cool tricks can be performed, like passing its output to Out-GridView in order to have a GUI-based table to interact with. 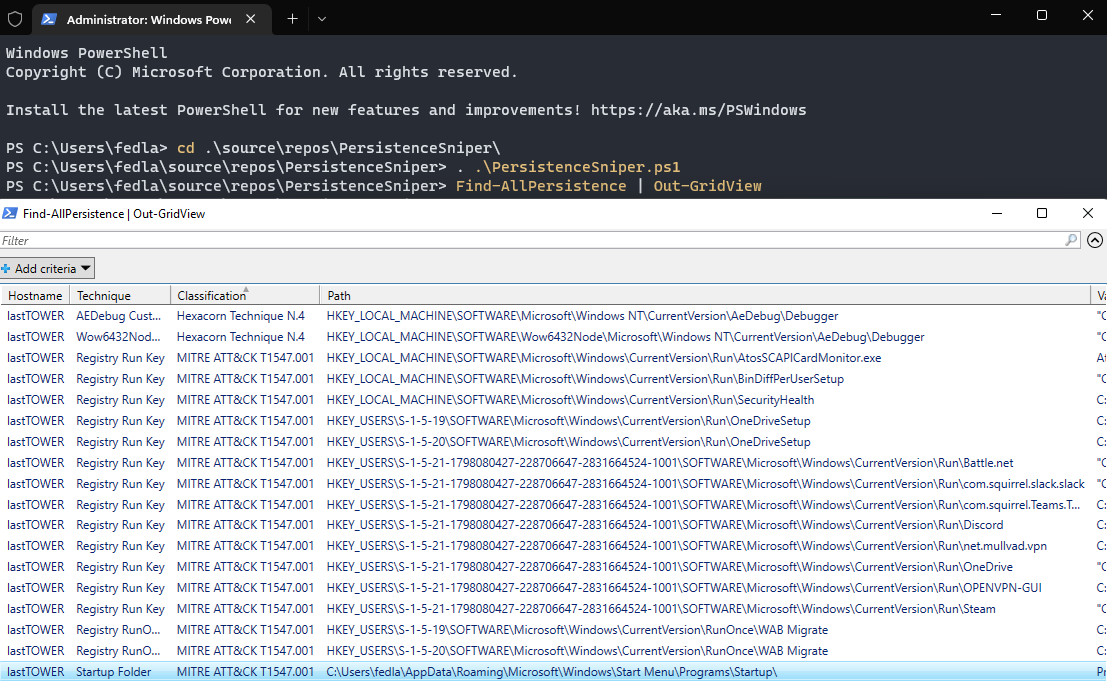 As already introduced, Find-AllPersistence outputs an array of Powershell Custom Objects. Each object has the following properties, which can be used to filter, sort and better understand the different techniques the function looks for:

Let’s face it, hunting for persistence techniques also comes with having to deal with a lot of false positives. This happens because, while some techniques are almost never legimately used, many indeed are by legit software which needs to autorun on system boot or user login.

This poses a challenge, which in many environments can be tackled by creating a CSV file containing known false positives. If your organization deploys systems using something like a golden image, you can run PersistenceSniper on a system you just created, get a CSV of the results and use it to filter out results on other machines. This approach comes with the following benefits:

Find-AllPersistence comes with parameters allowing direct output of the findings to a CSV file, while also being able to take a CSV file as input and diffing the results.

One cool way to use PersistenceSniper my mate Riccardo suggested is to use it in an incremental way: you could setup a Scheduled Task which runs every X hours, takes in the output of the previous iteration through the -DiffCSV parameter and outputs the results to a new CSV. By keeping track of the incremental changes, you should be able to spot within a reasonably small time frame new persistences implanted on the machine you are monitoring.

The topic of persistence, especially on Windows machines, is one of those which see new discoveries basically every other week. Given the sheer amount of persistence techniques found so far by researchers, I am still in the process of implementing them. So far the following 34 techniques have been implemented successfully:

The techniques implemented in this script have already been published by skilled researchers around the globe, so it’s right to give credit where credit’s due. This project wouldn’t be around if it weren’t for:

I’d also like to give credits to my fellow mates at @APTortellini, in particular Riccardo Ancarani, for the flood of ideas that helped it grow from a puny text-oriented script to a full-fledged Powershell tool.

This project is under the CC0 1.0 Universal license. TL;DR: you can copy, modify, distribute and perform the work, even for commercial purposes, all without asking permission.

GitHub - last-byte/PersistenceSniper: Powershell module that can be used by...