“The WireGuard VPN protocol will be included into the next Linux kernel as Linus Torvalds has merged it into his source tree for version 5.6,” reports TechRadar: 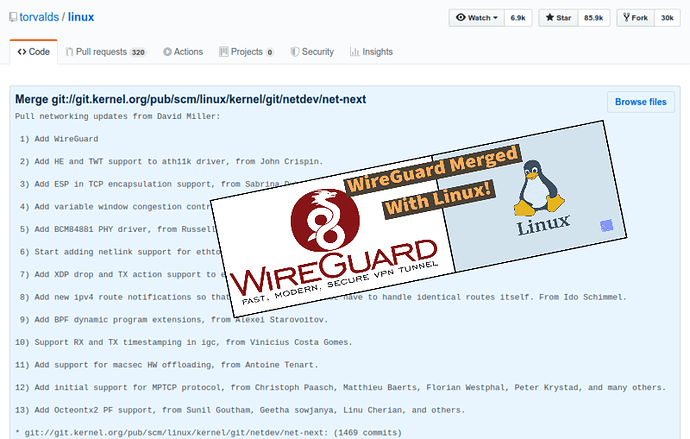 While there are many popular VPN protocols such as OpenVPN, WireGuard has made a name for itself by being easy to configure and deploy as SSH… The WireGuard protocol is a project from security researcher and kernel developer Jason Donenfeld who created it as an alternative to both IPsec and OpenVPN. Since the protocol consists of around just 4,000 lines of code as opposed to the 100,000 lines of code that make up OpenVPN, it is much easier for security experts to review and audit for vulnerabilities.

While WireGuard was initially released for the Linux kernel, the protocol is now cross-platform and can be deployed on Windows, macOS, BSD, iOS and Android.

Ars Technica notes that with Linus having merged WireGuard into the source tree, “the likelihood that it will disappear between now and 5.6’s final release (expected sometime in May or early June) is vanishingly small.”

WireGuard’s Jason Donenfeld is also contributing AVX crypto optimizations to the kernel outside the WireGuard project itself. Specifically, Donenfeld has optimized the Poly1305 cipher to take advantage of instruction sets present in modern CPUs. Poly1305 is used for WireGuard’s own message authentication but can be used outside the project as well — for example, chacha20-poly1305 is one of the highest-performing SSH ciphers, particularly on CPUs without AES-NI hardware acceleration.