While a lot of focus has been on the TPM requirements for Windows 11, Microsoft has since updated its documentation to provide a complete list of supported processors. At present the list includes only Intel 8th Generation Core processors or newer, and AMD Ryzen Zen+ processors or newer, effectively limiting Windows 11 to PC less than 4-5 years old.

Notably absent from the list is the Intel Core i7-7820HQ, the processor used in Microsoft’s current flagship $3500+ Surface Studio 2. This has prompted many threads on Reddit from users angry that their (in some cases very new) Surface PC is failing the Windows 11 upgrade check.
The Verge confirms:Windows 11 will only support 8th Gen and newer Intel Core processors, alongside [Intel’s 2016-era] Apollo Lake and newer Pentium and Celeron processors. That immediately rules out millions of existing Windows 10 devices from upgrading to Windows 11… Windows 11 will also only support AMD Ryzen 2000 and newer processors, and 2nd Gen or newer [AMD] EPYC chips. You can find the full list of supported processors on Microsoft’s site…

Originally, Microsoft noted that CPU generation requirements are a “soft floor” limit for the Windows 11 installer, which should have allowed some older CPUs to be able to install Windows 11 with a warning, but hours after we published this story, the company updated that page to explicitly require the list of chips above.

Many Windows 10 users have been downloading Microsoft’s PC Health App (available here) to see whether Windows 11 works on their systems, only to find it fails the check… This is the first significant shift in Windows hardware requirements since the release of Windows 8 back in 2012, and the CPU changes are understandably catching people by surprise.

Microsoft is also requiring a front-facing camera for all Windows 11 devices except desktop PCs from January 2023 onwards.
“In order to run Windows 11, devices must meet the hardware specifications,” explains Microsoft’s official compatibility page for Windows 11.

“Devices that do not meet the hardware requirements cannot be upgraded to Windows 11.”

Windows 11 is advertiser friendly. We will have to block ads in WINDOWS NOW

good thing i have an i7 8th gen

Tool to check why your PC isn’t Windows 11 ready

Norton 360 tried to block it as well. It can be a bit touchy.

they started thier own destruction its really stupid if people started throwing thier 4 to 5 year old pc laptops for windows 11, we went through a pandemic and lots of people have lost jobs and the computer hardware prices are spiked so high that now microsoft is forcing users to upgrade to new pc and laptops smh… trust me this issue is not faced my a small amount users worldwide when thier user base starts dropping they will do something my screen shots on a dumb reason that microsoft says why i cant upgrade to windows 11 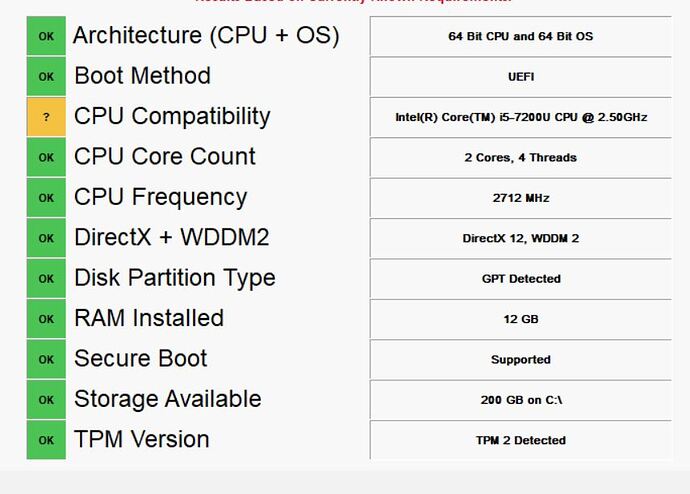 I have installed windows 11 and its just different UI but all the same windows 10, some bugs

I also have an i5-7200U cpu and I’m running windows 11 (in Dev) and no worries it runs fine. A few bugs but it’s basically windows 10 with a nicer UI and a few new features.