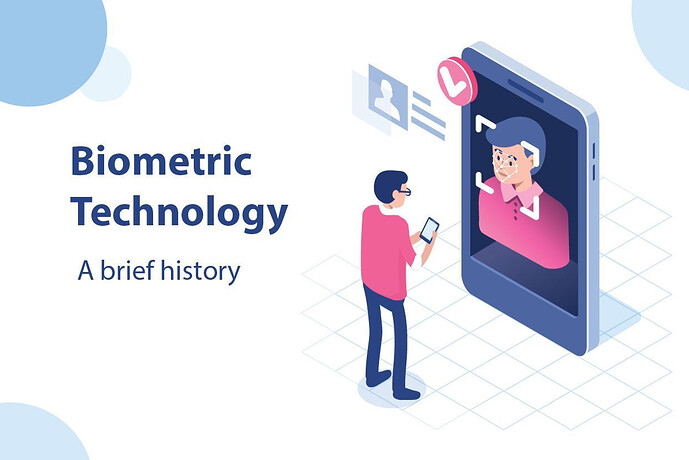 Modern biometric technology began in the 1960s, evolving into high-tech scanners that read bio-markers with an accuracy touching 100%. In 2020, biology-based science is disrupting the authentication industry — at speed.
The future is now passwordless.

In 1960, scientists began identifying the physiological components of acoustic speech and phonic sounds. This was the precursor to modern voice recognition technology. In 1969, the Federal Bureau of Investigation (FBI) pushed for automated fingerprint identification which led to the study of minutiae points to map unique patterns and ridges.

By 1975, the first scanners to extract fingerprint points were prototyped, funded by the FBI. Digital storage costs were prohibitive, so the National Institute of Science and Technology (NIST) worked on compression and algorithms.

The work at NIST led to the development of the M40 algorithm, the first operational matching algorithm used at the FBI. Used to narrow the human search, this algorithm produced a significantly smaller set of images that were then provided to trained and specialized human technicians for evaluation. Developments continued to improve the available fingerprint technology. — biometricupdate

The 1990s — Biometric Science Takes Off

The 1990s was a boom time for biometrics. Algebraic equations revealed that less than one hundred values could differentiate normalized face images. The National Security Agency (NSA) formed the Biometric Consortium. The Department of Defence (DoD) partnered with the Defense Advanced Research Products Agency (DARPA) to fund face recognition algorithms for commercial markets.

Lockheed Martin contracted to build an automated fingerprint identification system for the FBI.

CODIS (the FBI’s forensic DNA database) was born to digitally store, search, and retrieve DNA markers. Retrieval was bottlenecked because the data existed in silos and biomarker lab sequencing took hours. A network would soon facilitate the electronic mass exchange of stored bio-indicators.

The 2000s — Rollout of Biometric Tech

President Bush made personal identification cards mandatory for all government personnel and automated palm print databases were deployed statewide. In 2008, the Department of Homeland Security stopped a suspected terrorist at the border by cross-matching biometric data.

2010s — The Shift from State to Smartphones

Biometric technology continued to power terrorist identification, but a shift happened in 2013 when Apple introduced Touch ID on the iPhone 5S. Biometrics was no longer strictly a government tool. It was now consumed by the public.

Touch ID is heavily integrated into iOS devices, allowing users to unlock their device, as well as make purchases in the various Apple digital media stores (iTunes Store, the App Store, iBookstore), and to authenticate Apple Pay online or in apps. On announcing the feature, Apple made it clear that the fingerprint information is stored locally in a secure location on the Apple [chip], rather than being stored remotely on Apple servers or in iCloud, making it very difficult for external access. — Source: National Science & Technology Council

Over the last 60 years, the barriers that made biometric authentication inaccessible for consumers, enterprises, and even code developers — the digital artisans of tech — were removed. Then, something happened in 2020:

The moving parts came together, catapulting biometric authentication into the mainstream.

Two technologies collided at the right time to facilitate the adoption of biometric authentication:

The science behind biology-based scanners improved to near-zero error rates and the price of sensors went down. That made integrating scanning sensors into smartphones easy.

Around 2010, Smartphone use exploded when 4G (LTE) wireless networks made streaming possible for millions of mobile consumers. Samsung and Apple built biometric fingerprint scanners into smartphones to authenticate the millions of smartphone users — and the public accepted this integration with open arms. Apple transitioned to face recognition with iPhone X.

Now, 5G is poised to put the Internet of Things (IoT) and big data in back pockets, and standards bodies and groups like FIDO and W3C not only recognize biometrics but regulate it.

The roadblocks that hindered biometrics have fallen away. Biology-based security as a futuristic concept has been replaced by widespread acceptance and a race to implement biometric tech — today.

The Future of Biometric Authentication

Technology constantly improves to combat threat actors’ efforts to find weaknesses in a system. But biometric technology is already at a secure state that supports its full-scale integration.

Biometric authentication technology can charge forward because biometric traits are next to impossible to forge, algorithms continue to revolutionize, and hardware scanners are already at next-to-zero error rates. Facial recognition has already been deployed outside of phones, making itself known in airports and stadiums.

Experts who study biometrics predict there will only be more options in the coming years, such as voice or heart-rate detection, signature authentication, and even devices that can tell who you are by the way you walk. The Pentagon is already working on tools for gait and heartbeat identification. — Washington Post

As passwordless authentication gains support and stimulus by bodies like FIDO open standards, integrating biometric technology into browsers, smartphones, and outside world applications will only continue to grow and improve. It didn’t take us all that long to get here; sixty years brought us from science fiction prediction to real-world mass adoption. Where will we be in 2030? Predictions point to passwordless.

Which biometric authentication technology will take off more than others is up in the air. In March of 2020, Google made Android devices (v7 and higher) FIDO2 certified. That means those users now log in without passwords. That same month, Microsoft, Dropbox, Chrome, Edge, and Firefox began integrating FIDO2 WebAuthn, an open web protocol approved by W3C. (source: The Verge).

Soon, risky password habits will fall into obscurity, and devices will recognize who we are automatically, open up, and let us get on with our lives.

LoginID is a comprehensive FIDO-based multifactor authentication solution that offers frictionless authentication. Created with developers and enterprises in mind, LoginID is FIDO-certified and adheres to P2D2 principles. With an implementation time of just one hour, LoginID’s multifactor authentication solution is a quick, simple to integrate, cost-effective, and regulatory compliant tool to give businesses peace of mind around data security. Source: hackernoon & meduim