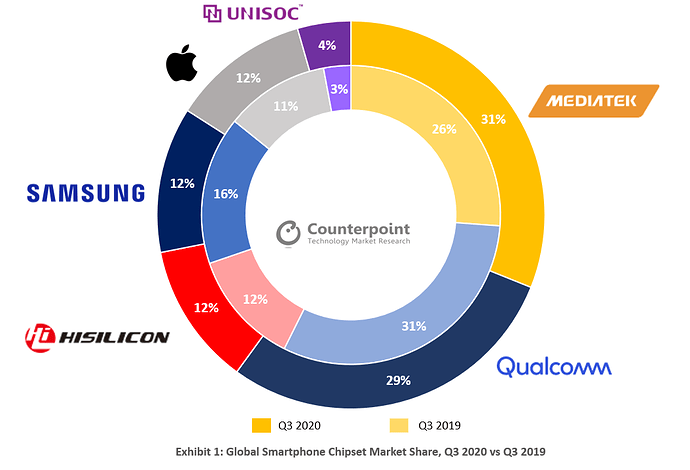 MediaTek became the biggest smartphone chipset vendor with 31% market share in the third quarter of 2020, when smartphone sales rebounded during the quarter, according to Counterpoint Research. From a report:

MediaTek’s strong performance in the US$100-250 price band and growth in key regions like China and India helped it become the biggest smartphone chipset vendor during the third quarter, said Counterpoint. Qualcomm was the biggest 5G chipset vendor in the third quarter of 2020, powering 39% of the 5G phones sold worldwide, Counterpoint indicated. Meanwhile, sales of 5G smartphones doubled during the quarter, accounting for 17% of all smartphones sold.

With Apple launching its 5G lineup, 5G smartphone sales will continue to rise in the fourth quarter of 2020, Counterpoint noted. An estimated one-third of all smartphones shipped will be 5G-enabled, Counterpoint said. “The share of MediaTek chipsets in Xiaomi has increased by more than three times since the same period last year,” said Counterpoint research director Dale Gai. “MediaTek was also able to leverage the gap created due to the US ban on Huawei. Affordable MediaTek chips fabricated by TSMC became the first option for many OEMs to quickly fill the gap left by Huawei’s absence. Huawei had also previously purchased a significant amount of chipsets ahead of the ban.”