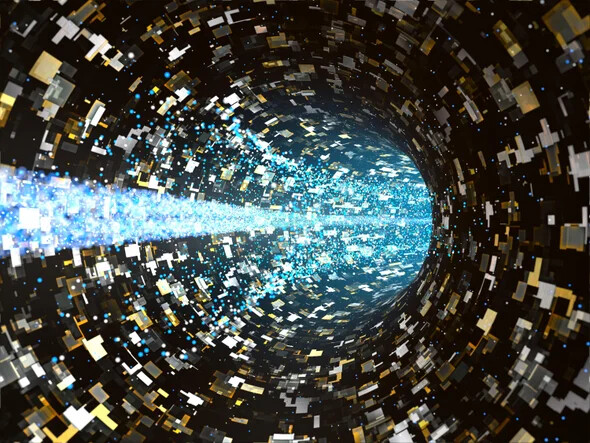 An anonymous reader quotes a report from Scientific American:

For the first time, a quantum computer made from photons – particles of light – has outperformed even the fastest classical supercomputers. Physicists led by Chao-Yang Lu and Jian-Wei Pan of the University of Science and Technology of China (USTC) in Shanghai performed a technique called Gaussian boson sampling with their quantum computer, named Jiuzhang. The result, reported in the journal Science, was 76 detected photons – far above and beyond the previous record of five detected photons and the capabilities of classical supercomputers.

Unlike a traditional computer built from silicon processors, Jiuzhangis an elaborate tabletop setup of lasers, mirrors, prisms and photon detectors. It is not a universal computer that could one day send e-mails or store files, but it does demonstrate the potential of quantum computing. Last year, Google captured headlines when its quantum computer Sycamore took roughly three minutes to do what would take a supercomputer three days (or 10,000 years, depending on your estimation method). In their paper, the USTC team estimates that it would take the Sunway TaihuLight, the third most powerful supercomputer in the world, a staggering 2.5 billion years to perform the same calculation as Jiuzhang. […] This latest demonstration of quantum computing’s potential from the USTC group is critical because it differs dramatically from Google’s approach. Sycamore uses superconducting loops of metal to form qubits; in Jiuzhang, the photons themselves are the qubits. Independent corroboration that quantum computing principles can lead to primacy even on totally different hardware “gives us confidence that in the long term, eventually, useful quantum simulators and a fault-tolerant quantum computer will become feasible,” Lu says.

… [T]he USTC setup is dauntingly complicated. Jiuzhang begins with a laser that is split so it strikes 25 crystals made of potassium titanyl phosphate. After each crystal is hit, it reliably spits out two photons in opposite directions. The photons are then sent through 100 inputs, where they race through a track made of 300 prisms and 75 mirrors. Finally, the photons land in 100 slots where they are detected. Averaging over 200 seconds of runs, the USTC group detected about 43 photons per run. But in one run, they observed 76 photons – more than enough to justify their quantum primacy claim. It is difficult to estimate just how much time would be needed for a supercomputer to solve a distribution with 76 detected photons – in large part because it is not exactly feasible to spend 2.5 billion years running a supercomputer to directly check it. Instead, the researchers extrapolate from the time it takes to classically calculate for smaller numbers of detected photons. At best, solving for 50 photons, the researchers claim, would take a supercomputer two days, which is far slower than the 200-second run time of Jiuzhang.