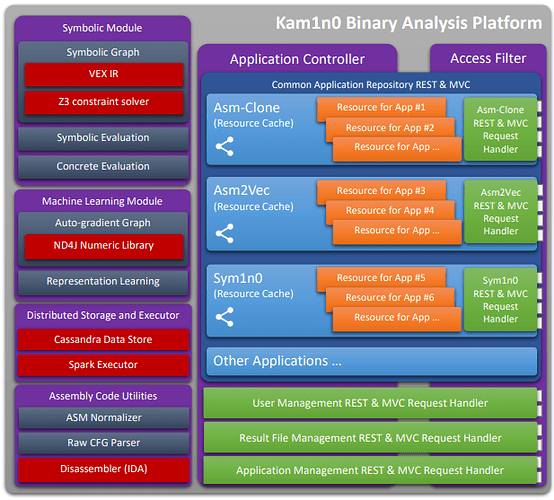 Kam1n0 v2.x is a scalable assembly management and analysis platform. It allows a user to first index a (large) collection of binaries into different repositories and provide different analytic services such as clone search and classification. It supports multi-tenancy access and management of assembly repositories by using the concept of Application. An application instance contains its own exclusive repository and provides a specialized analytic service. Considering the versatility of reverse engineering tasks, Kam1n0 v2.x server currently provides three different types of clone-search applications: Asm-Clone, Sym1n0, and Asm2Vec, and an executable classification based on Asm2Vec. New application type can be further added to the platform. Kam1n0 was developed by Steven H. H. Ding and Miles Q. Li under the supervision of Benjamin C. M. Fung of the Data Mining and Security Lab at McGill University in Canada. It won the second prize at the Hex-Rays Plug-In Contest 2015. If you find Kam1n0 useful, please cite our paper:

Asm-Clone applications try to solve the efficient subgraph search problem (i.e. graph isomorphism problem) for assembly functions (<1.3s average query time and <30ms average index time with 2.3M functions). Given a target function (the one on the left as shown below), it can identify the cloned subgraphs among other functions in the repository (the one on the right as shown below). Semantic clone search by differentiated fuzz testing and constraint solving. An efficient and scalable dynamic-static hybrid approach (<1s average query time and <100ms average index time with 1.5M functions). Given a target function (the one on the left as shown below), it can identify the cloned subgraphs among other functions in the repository (the one on the right as shown below). Support visualization of abstract syntax graph. In this application, the user defines a set of software classes which are based on functional relatedness and provides binaries belong to each class. Then the system automatically groups functions into clusters in which functions are connected directly or indirectly by clone relation. The clusters that are discriminative for the classification are kept and serve as signatures of their classes. Given a target binary, the system shows the degree it belongs to each software class.

The figure below shows the major UI components and functionalities of Kam1n0 v2.x. We adopt a material design. In general, each user has an application list, a running-job list, and a result file list. The current release of Kam1n0 consists of two installers: the core server and IDA Pro plug-in.

The Kam1n0 core engine is purely written in Java. You need the following dependencies:

Download the Kam1n0-Server.msi file from our release page. Follow the instructions to install the server. You will be prompted to select an installation path. IDA Pro is optional if the server does not have to deal with any disassembling. In other words, the client side uses the Kam1n0 plugin for IDA Pro. It is strongly suggested to have the IDA Pro installed with the Kam1n0 server. Kam1n0 server will automatically detect your IDA Pro by looking for the default application that you used to open .i64 file.

The Kam1n0 IDA Pro plug-in is written in Python for the logic and in HTML/JavaScript for the rendering. The following dependencies are required for its installation:

Next, download the Kam1n0-IDA-Plugin.msi installer from our release page. Follow the instructions to install the plug-in and runtime. Please note that the plug-in has to be installed in the IDA Pro plugins folder which is located at $IDA_PRO_PATH$/plugins. For example, on Windows, the path could be C:/Program Files (x86)/IDA 6.95/plugins. The installer will detect and validate the path.

The assembly code repositories and configuration files used in previous versions (<2.0.0) are no longer supported by the latest version. Please contact us if you need to migrate your old repositories.

IntelliJ: Import the root /kam1n0/kam1n0/ as a maven project. All the submodules will be loaded accordingly. EclipseEE: Add the cloned git repository to the git view. Import all maven projects from the git repository. You may need to modify the classpath to address any error. All the resources path are dynamically modified when running inside an IDE (through the kam1n0-resources submodule).

To build the project:

The resulting binaries can be found in /kam1n0/build-bins/

To run the test code, you will need to first download chromedriver.exe from http://chromedriver.chromium.org/ and add its absolute path into an environment variable named webdriver.chrome.driver. It is also required that there is a chrome browser installed in the system. The test code will launch a browser instance to test the UI interfaces. The complete testing procedure will take approximately 3 hours.

These commands only compiles java with pre-compiled wheels of libvex and z3. It works out-of-the-box. The build of libvex and z3 is platform-dependent. We use a fork of libvex from Angr. More serious build scripts as well as installers for windows/linux can be found under /kam1n0-builds/

We have a Jenkin server for contineous development and delivery. Latest stable release will be posted here. Periodically we will synchronize our internal experimental branch with this repository.

The software was developed by Steven H. H. Ding, Miles Q. Li, and Benjamin C. M. Fung in the McGill Data Mining and Security Lab and Queen’s L1NNA Research Laboratory in Canada. It is distributed under the Apache License Version 2.0. Please refer to LICENSE.txt for details.

Copyright 2014-2021 McGill University and the Researchers. All rights reserved. 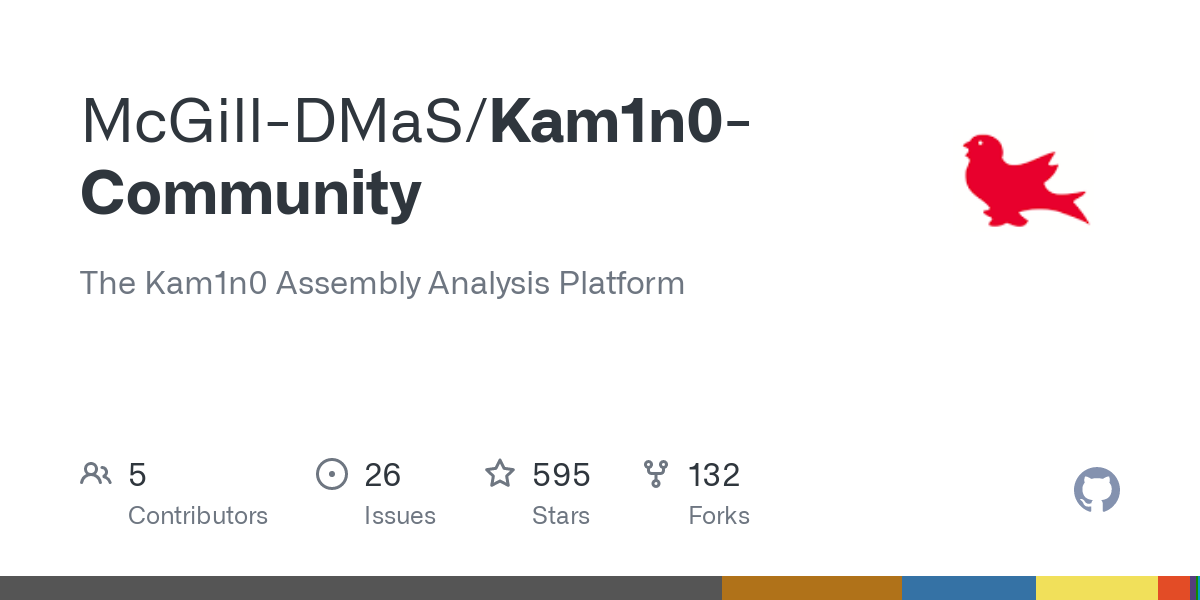 The Kam1n0 Assembly Analysis Platform. Contribute to McGill-DMaS/Kam1n0-Community development by creating an account on GitHub.