Local authorities in India-controlled Kashmir have opened a case against hundreds of people who used virtual private networks (VPNs) to circumvent a social media ban in the disputed Himalayan region in a move that has been denounced by human rights and privacy activists. From a report: 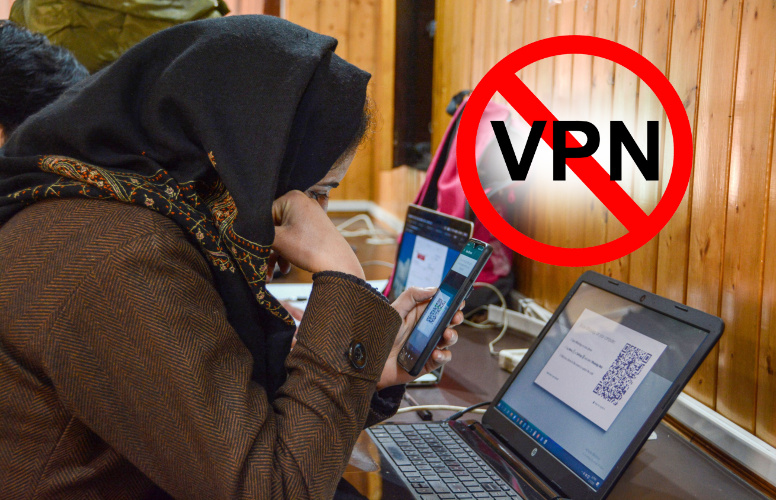 Tahir Ashraf, who heads the police cyber division in Srinagar, said on Tuesday that the authority had identified and was probing hundreds of suspected users who he alleged misused social media to promote “unlawful activities and secessionist ideology.” On Monday, the police said they had also seized “a lot of incriminating material” under the Unlawful Activities Prevention Act (UAPA), the nation’s principal counter-terrorism law. Those found guilty could be jailed up to seven years.

The move comes weeks after the Indian government restored access to several hundred websites, including some shopping websites such as Amazon India and Flipkart and select news outlets in the disputed region.

Misleading title. The cases are registered for “misused social media to promote unlawful activities and secessionist ideology” using VPN and NOT for using VPN per se. For example - one is not booked by the authorities for using Tor Browser but if one accesses child pornography, for example, they must be booked. Just as using Facebook won’t land one in trouble. However, use it for identity theft and one would be booked almost anywhere in the world.

Yes, This is the gift given by internet and social media. Until the title of news is not sensational , you won’t read news. So no matter how rubbish or important news is there,title always has to be sensation,trending,appealing.

whether you use vpn or tor chain the ISP will always be able to know to which server you were connected please do read terms of usage of VPN agreements while using it turns out it just makes your IP safe upto a certain extent thats it there are a lot of bad things which can be done using anonymity never support this kind of stuffs UNITY IS THE KEY rather than DISPARITY !

Local authorities in India-controlled Kashmir have opened a case against hundreds of people who used virtual private networks (VPNs) to circumvent a social media ban in the disputed Himalayan region in a move that has been denounced by human rights and privacy activists.

Are you serious ? The words and phrases used in your article are same as used by ndtv, NYTimes and Pak media News papers and online articles . why not use your own words and brain instead of copy pasting article . Just a simple logic why anyone would use vpn ? Either to watch porn or to get access to some websites which are blocked by government of india for good reason. So it’s obvious that if they used vpn then they must be planning something mischievous . India-controlled Kashmir what is this ? It’s kashmir simpler as it gets . “Disputed” well it’s not disputed , it was forcefully captured by pakistani islamic terrorists . “denounced by human rights and privacy activists” who are these mother fu***rs ? These local kashmiri islamic militants have always the backing of so called human rights activists . Have you ever heard these human rights activists shouting for indian army , J&K police or Kashmiri padits ? The answer is no. Why are you hell bent towards these anti-india forces. So watch for words and phrases before you post .

You are clearly biased towards the current Indian govt. You have a point, then keep it across straight. Don’t muddy things up taking sides and making it look like propaganda. Internet, VPN used for activities meant to harm the sovereignty of any country must be punished. This forum is about sharing knowledge not about spreading political trash.

are you stupid ? its clearly not his article , all of the news article you found here is re posted for information purposes not because he need to write it

VPN & tor network should give you free of speech without fear getting arrested if that’s what in the mind of Kashmir people then clearly something wrong with Indian govt , even proving it by opening case against hundred of people

Dude try not to display your kindergarten intellect, all his previous posts have been from sources which are biased, if you post something for sensation then its nothing but trash. And if under the garb of freedom of speech terrorism and violence is being propagated then it must be punished irrespective of the country. You have not idea of the Indian subcontinent so try to keep your mind on kindergarten and let the adults take care of the real world things.

lol real adults bravo dude you’re probably younger than me kiddo , if you cant express your opinion then you wouldn’t know the real situation there , if you filter everything then everything that come out of it will be controlled , let the people choose which side they want to live on demonstration happens dude in every part of the world, and for sure every piece of information that come out of your mouth will be biased too because you’re an Indian , what kind of insult is kindergarten intellect so funny

What do you mean India-Controlled Kashmir…Are you mad or what…?
Kashmir is the integral part of India…It was, now, and it will be always…

My bad you truly aren’t even to the level of a kindergarten kid, it’s ok to be illiterate nothing bad about it. You need education, and as far as insults are concerned, “stupid” was real mature lil one. Sadly people who have never even understood the scenario in India, status of kashmir and the UN resolutions seem to consider themselves the highest authority to comment on the matter. Let the Indians take care of how to run their own country. Read Before commenting without a shred of fact in hand.

good job for killing about 70,000 of its own people very peaceful and well ran country

Be Agreeable, Even When You Disagree

You may wish to respond to something by disagreeing with it. That’s fine. But remember to criticize ideas, not people . Please avoid:

Instead, provide reasoned counter-arguments that improve the conversation.

The conversations we have here set the tone for every new arrival. Help us influence the future of this community by choosing to engage in discussions that make this forum an interesting place to be — and avoiding those that do not.

Discourse provides tools that enable the community to collectively identify the best (and worst) contributions: bookmarks, likes, flags, replies, edits, and so forth. Use these tools to improve your own experience, and everyone else’s, too.

Let’s leave our community better than we found it.

These are not concrete terms with precise definitions — avoid even the appearance of any of these things. If you’re unsure, ask yourself how you would feel if your post was featured on the front page of the New York Times.

This is a public forum, and search engines index these discussions. Keep the language, links, and images safe for family and friends.

Behave, and beware of such discussions. That’s all I can say!

It’s better to know the full background history of a news and then talk. Our govt didn’t killed any civilians or innocents in our kashmir. Infiltrators and terrorists from pakistan and infidels within the kashmir are the ones killed. It’s the duty of a nation to protect its citizens and its states from such perpetrators. That’s what our country does and will do at any cost. Try to find & know the history of kashmir and its indigenous people (the kashmiri pandits) who were brutally killed and thrown out from their own places by the infiltrators . Even after giving special status and funding so much of money to kashmir., we indians got only terror attacks in return (Its like poking our eyes by our-self). For the first time our govt took a bold step to fight these terrorists and infiltrators. Even now, there are people misusing the internet/VPN for doing attacks and other terror plots. What will a responsible govt will do??. That’s what our govt does for our country.

So, Its better for others not to involve into the affairs of our country and stop spreading fake half baked news.

IT’s OUR KASHMIR, IT’ was and it will always be.

dude just stop it -_- i will take sam advice and agree with you , let me clap with you

let me use your tags to

You really are mentally ill. I can only sympathize with you. The issue of kashmir is very dear to every Indian. Like a fool when you make such crass statements without a shred of proof in your hand and abuse India and her people like that, dude you seriously need therapy. The nation which has never invaded another country in all of its existence, never annexed any part of anther’s territory is being accused of mass slaughter by a dimwit need to be reported.

Please avoid Political and Religion posts in this forum. We all 1Hack guys are matured and understand the propaganda of leftist. @TheJoker (My dear friend), please close this post and lets concentrate on creativity and progress.