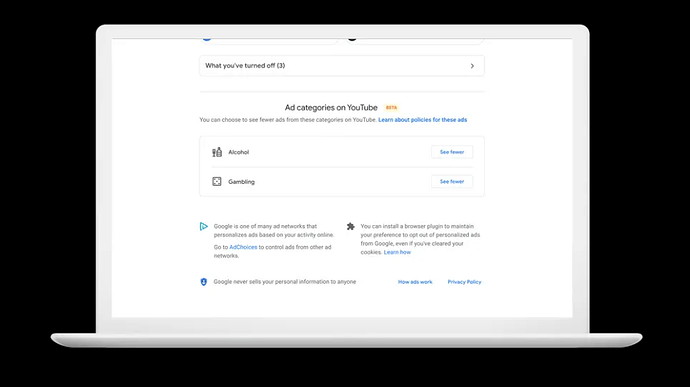 On Thursday, Google announced a new setting that lets people limit the alcohol- and gambling-related ads they come across. Gizmodo reports:

Per the announcement, the feature will first roll out for YouTube ads in the U.S., before globally expanding to ads across YouTube and Google search in “early 2021.” Countries that already have legal limitations on ads in these sorts of categories – like say, Norway or Sweden – won’t see any change in their policies as a result, Google added. Up until this point, people who saw one of these ads had the option to “mute” them, which would keep that specific ad from cropping up across Google’s properties, or any of the countless web publishers that Google partners with. On top of that, it also kept users from seeing any ads that Google deemed “similar” to the ad in question, either because they looked the same, or were from the same advertiser.

This new feature, Google explained, is an “extra step” that puts more choice in the user’s hands. In reality, though, it’s closer to something of a half-step. Google doesn’t quite qualify what it means by “limiting” these ads in the blog post, but it’s safe to assume that some will still slip through. That means Google could still pocket the money made from an addict being served ads for a substance or behavior they’re trying to avoid, but the numbers will be “significantly reduced,” according to the company. “While our intent is to be able to block all ads from a given category, there are certain ads that can be difficult to categorize,” a Google spokesperson said in an email, giving the example of an ad for an airline featuring a flight attendant serving champagne. “We want to be fully transparent so we’re using ‘see fewer ads’ rather than ‘see no ads’ or ‘block ads’ to appropriately set expectations that while significantly reduced, people may still see ads related to a selected category,” the spokesperson added. “But of course, we’ll continue to work to get as close as possible to blocking all ads within a selected category.”