When Windows 10 was first released, it came with many features such as Telemetry that can collect the user data and send it back to Microsoft servers. Even though none of the personal or identifiable information is collected, some users got concerned about privacy issues. Since then many privacy-related tools for Windows 10 have been released in order to “fix” the privacy settings for it, for example, Spybot Anti-beacon, Ashampoo Antispy, DoNotSpy10, Disable Windows 10 Tracking and so on. Win 10 Privacy is one such tools that can make changes to Windows 10 settings and prevent it from collecting or sending data to Microsoft servers.

Win10 Privacy user interface reminds of the now-defunct DWS (Destroy Windows Spying) tool. Basically it allows you to do two things – add Microsoft domains to the HOSTS file to block them and remove the Microsoft apps that come pre-installed with Windows 10. You can switch to the Loopback tab to add all the domain names to the HOSTS file and block them. Some of the Microsoft apps and services will stop working after this. For example, you won’t be able to use Skype as it won’t be able to connect with Microsoft servers. 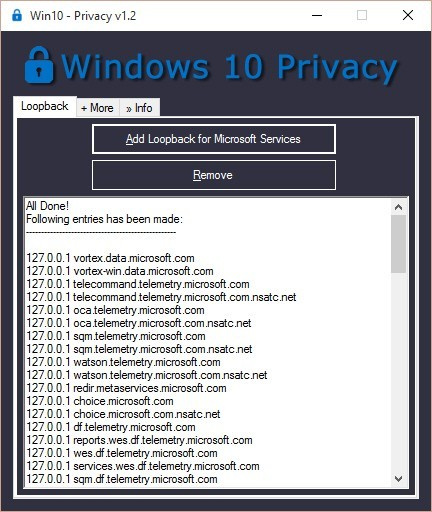 Under the More+ tab, you can find tools to remove the pre-installed apps. These apps such as ZuneMusic, ZuneVideo, BingNews, BingWeather, BingFinance, BingSports, etc. are considered unnecessary by many people and won’t be missed by most people. Some other apps such as Microsoft Photos can easily be replaced by much better alternatives like IrfanView or XnView. After removal of these apps, their shortcuts in the Start Menu will still remain and this may require a little manual cleaning up on your part. 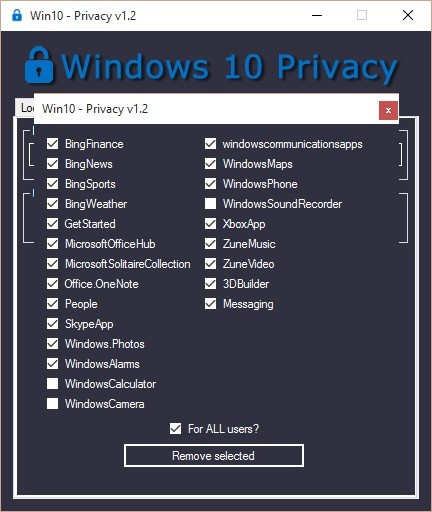 If you do not want to block Microsoft servers, then there are some other tools like Ashampoo AntiSpy that can help you configure Windows 10 settings, services, apps and policies so as to improve the privacy settings.