What You Should Known Before Leaking a Zoom Meeting 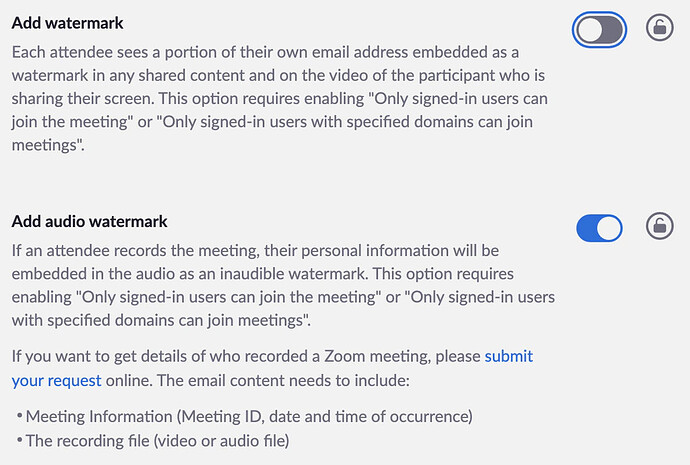 The Intercept’s Nikita Mazurov warns that Zoom has digital watermarks that could expose sources working with journalists or government officials. An anonymous reader shares an excerpt from the report:

Many users may not realize it, but Zoom has the capability to insert both video and audio watermarks into a meeting. The video watermarks are readily perceptible to meeting participants. When enabled, the video watermarking feature superimposes the username portion of each participant’s email address over the content they are viewing when another participant shares their screen and places the same watermark over the current active speaker. Because the video watermark appears across the entirety of the video frame, blurring may adversely impact the visibility of the underlying material. In contrast, the audio watermarks are not readily perceptible to casual listeners, though they are what in watermarking parlance is known as “overt.” That means the fact that they are embedded is easily discerned by meeting participants: When a Zoom meeting has the audio watermark, or what Zoom also calls the “audio signature,” feature enabled, the meeting will have a green circular icon with a sound wave and a padlock at the top left of the frame next to the encryption icon.

It is not immediately apparent at what point Zoom injects its “ultrasonic” audio watermark into the audio stream – whether this happens only if a meeting attendee presses the Record button in Zoom or if the audio stream is watermarked prior to that point. Nonetheless, when recording a Zoom meeting, it is best to avoid using Zoom’s built-in recording option and to capture the meeting using a third-party audio/video recorder. Zoom mentions that in order to identify the participant who recorded the meeting, they need at least two minutes of audio from the meeting, though it stands to reason that shorter snippets may also be identifiable if they happen to contain the audio watermark. Journalists should also be wary of publishing raw audio leaked from Zoom meetings, particularly if the source is not sure whether audio watermarking was enabled or not.

Aside from Zoomâ™s own watermarks, a number of elements appearing on an individualâ™s own device may inadvertently give away the identity of the person who is recording. If the meeting video is being recorded either via screen recording software or a camera, there are a number of elements to watch out for…