What Is Hacking? Introduction & Types [Guide]

What is Hacking? Introduction & Types

Hacking is identifying weakness in computer systems or networks to exploit its weaknesses to gain access . Example of Hacking: Using password cracking algorithm to gain access to a system

Computers have become mandatory to run a successful businesses. It is not enough to have isolated computers systems; they need to be networked to facilitate communication with external businesses. This exposes them to the outside world and hacking. Hacking means using computers to commit fraudulent acts such as fraud, privacy invasion, stealing corporate/personal data, etc. Cyber crimes cost many organizations millions of dollars every year. Businesses need to protect themselves against such attacks.

In this tutorial, we will learn-

Before we go any further, let’s look at some of the most commonly used terminologies in the world of hacking.

Who is a Hacker? Types of Hackers

A Hacker is a person who finds and exploits the weakness in computer systems and/or networks to gain access. Hackers are usually skilled computer programmers with knowledge of computer security. 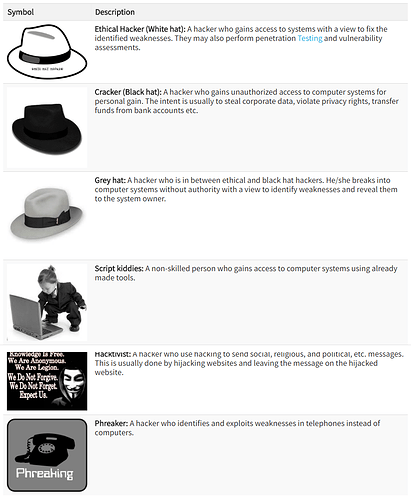 Cyber crime is the use of computers and networks to perform illegal activities such as spreading computer viruses, online bullying, performing unauthorized electronic fund transfers, etc. Most cybercrimes are committed through the internet. Some cybercrimes can also be carried out using Mobile phones via SMS and online chatting applications.

What is Ethical Hacking?

Ethical Hacking is identifying weakness in computer systems and/or computer networks and coming with countermeasures that protect the weaknesses. Ethical hackers must abide by the following rules.

Ethical Hacking is legal if the hacker abides by the rules stipulated in the above section on the definition of ethical hacking . The International Council of E-Commerce Consultants (EC-Council) provides a certification program that tests individual’s skills. Those who pass the examination are awarded with certificates. The certificates are supposed to be renewed after some time.