**Well for a quick note I would like you to know that “bee.com” or “Bee network” is a new blockchain-based cryptocurrency innovation. That provides a gamified experience for users to earn Bee, and one can easily mine Bees by using their mobile phones. There are three roles - Miner, Referrer, and Verifier. The Bee Network players/users will earn rewards in Bees. The more you refer the larger Bee/hour will be.

It is expected that in the mid of 2022 this coin will be listed on the exchange with a value of 1$ or above per coin. It’s huge right! That’s why they limited the numbers of users by 1 billion, and once the target completed they will stop the mining and will list the coin in exchange. However, The number of users will also affect the speed of Bee/hour. (See the pictures below) 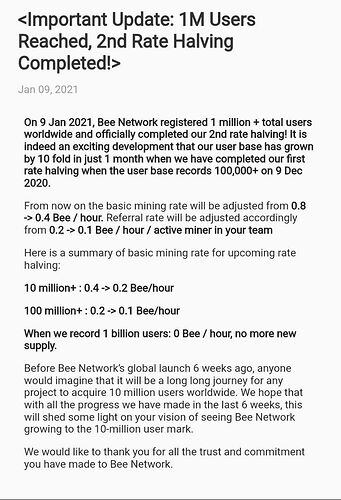 (we are at this level currently) 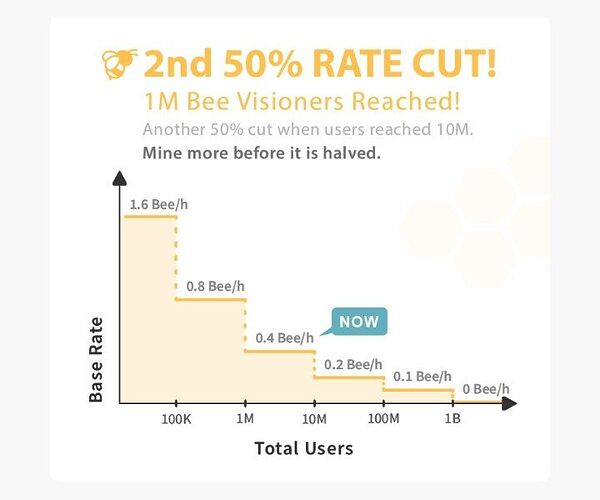 Lets set up the app -

Hope you guys get the idea. It basically runs on your GPU and doesn’t need any types of permissions/access. It’s safe and free to use. The massive your team would be the more bees you will convert! It’s precious, right!

Would love your appreciation! thanks!
Dvs_k

You need to open the application after every 24Hour and click on the bee icon to start.
Mine while still you can.

It looks same as pi network.

Why would a company of a unknown origin giving you cryptocurrency named Bee Games Ltd? Is it so that they can scam people of their GPU resources and then back out from giving the amount saying it was just a game.

correct. this is scam.

Well, i do agree with you! Lets get this through an example - You must know about Bitcoins and at that time when it was initially launched, it was a whole new concept to the world, Hence no one believed the strength of that currency… butt we all know very well about it now!! Lets come to Bee… Do you know the purpose of these Cryptocurrencies? Well they are build to provide more economic value to the people that goes directly to big companies today (paypal mar. cap. is more than $100bn today)*. However, the value of one btc is $30k+ now, so it become difficult for normal people to use it and thats the reason these small and unknown origin companies launches their own currency to change the current situation. It all depends on you whether you think its legit or not!

Meanwhile, it doees work on CPU, i wrote that wrong. my apologies…

Ya… Pi has been around more than an year and still no news about Value.

Yes, it does say https://bee.games for their site. The whitepaper seems to have a clear breakdown.

And just like BTC, it’s definitely a community effort to give the coin its value. It works only if more people believe in it. I would like to know their mission behind this token.

There seems to be a trend these these ‘mobile miners’ popping up. It is rumored that some games and few highly popular social media apps were literally mining in secret for years. Millions of people with a ‘sleeper miner’ in their pockets, grinding away. The idea is that human interaction, ads and processing power are also used for mining their coins in the background, even while your phone was sleeping. When it’s charging and a fast wifi speed the better.

More taps, video clicks, likes, popup closers, types and swipes, literally everything is calculating random numbers to build a single coin, pumping and dumping near your private parts, and if that were true, they’re not paying anyone for any of the work. Again, this is a conspiracy theory, need to do your own research.

BEE Network seems dicey at first glance. So far, it hasn’t asked for money or payment info. They tell you that the token will be of value once it hits a threshold. And once that happens they can be traded on places like BINANCE allegedly.

I have this APP running on two burners and its doing fine through a VPN server. I’m using Nord.

Having it on my daily driver is risky. In my opinion.

Ohh you can check that out here!
Whitepapers*

It looks exactly same as pi network. I can’t say if it’s legit or not.
However, a question arises in my mind that what if these network are using millions of phones to mines some other crypto

WHAT IF they are mining real crypto, that they talked about?

and if it looks same as PI network it means it follows same structure as PI do.
Well, if everyone compared same every other cryptos out there, then there wouldn’t have another cypto except BTC… so its totally up to you, whether you believe in it or not!!