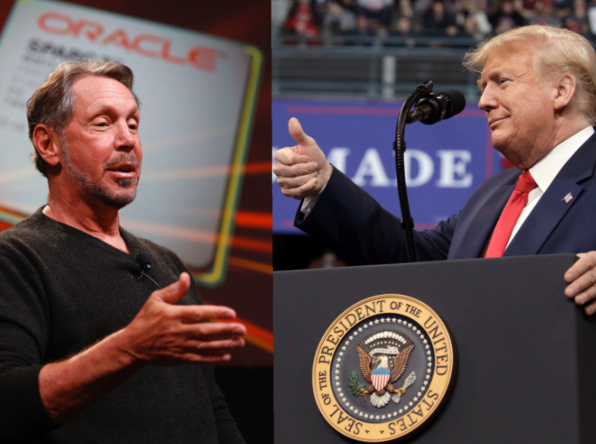 The Trump administration urged the U.S. Supreme Court to reject an appeal by Alphabet’s Google, boosting Oracle’s bid to collect more than $8 billion in royalties for Google’s use of copyrighted programming code in the Android operating system. The administration weighed in on the high-stakes case on the same day that President Donald Trump attended a re-election campaign fundraiser in California hosted by Oracle’s co-founder, billionaire Larry Ellison. Ellison hosted a golf outing and photos with Trump. The event cost a minimum of $100,000 per couple to attend, with a higher ticket price of $250,000 for those who wanted to participate in a policy roundtable with the president, the Palm Springs Desert Sun reported. Google is challenging an appeals court ruling that it violated Oracle copyrights when it included some Oracle-owned Java programming code in Android. The dispute has split Silicon Valley, pitting developers of software code against companies that use the code to create programs. Google’s “verbatim copying” of Oracle’s code into a competing product wasn’t necessary to foster innovation, the U.S. Solicitor General Noel Francisco said Wednesday in a filing with the court.