THESE ARE THE TOP 10 ANDROID APPS THAT TURN YOUR PHONE INTO A HACKING DEVICE. 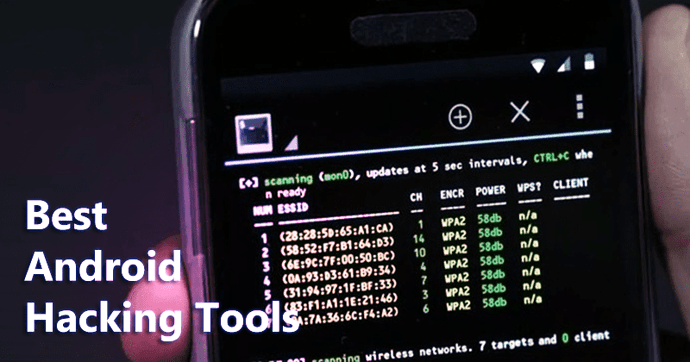 1.SpoofApp
SpoofApp is a Caller ID Spoofing, Voice Changing and Call Recording mobile app for your iPhone, BlackBerry and Android phone. It’s a decent mobile app to help protect your privacy on the phone. However, it has been banned from the Play Store for allegedly being in conflict with The Truth in Caller ID Act of 2009.

2.Andosid
The DOS tool for Android Phones allows security professionals to simulate a DOS attack (an http post flood attack to be exact) and of course a dDOS on a web server, from mobile phones.

3.Faceniff
Allows you to sniff and intercept web session profiles over the WiFi that your mobile is connected to. It is possible to hijack sessions only when WiFi is not using EAP, but it should work over any private networks.

4.Nmap
Nmap (Network Mapper) is a security scanner originally written by Gordon Lyon used to discover hosts and services on a computer network, thus creating a “map” of the network. To accomplish its goal, Nmap sends specially crafted packets to the target host and then analyses the responses.

5.Anti-Android Network Toolkit
zANTI is a comprehensive network diagnostics toolkit that enables complex audits and penetration tests at the push of a button. It provides cloud-based reporting that walks you through simple guidelines to ensure network safety.

6.SSHDroid
SSHDroid is a SSH server implementation for Android. This application will let you connect to your device from a PC and execute commands (like “terminal” and “adb shell”) or edit files (through SFTP, WinSCP, Cyberduck, etc).

7.WiFi Analyser
Turns your android phone into a Wi-Fi analyser. Shows the Wi-Fi channels around you. Helps you to find a less crowded channel for your wireless router.

8.Network Discovery
Discover hosts and scan their ports in your Wifi network. A great tool for testing your network security.

9.ConnectBot
ConnectBot is a powerful open-source Secure Shell (SSH) client. It can manage simultaneous SSH sessions, create secure tunnels, and copy/paste between other applications. This client allows you to connect to Secure Shell servers that typically run on UNIX-based servers.

These tricks are so great @SaM.

but only if you know how to use it.

Yeah, try some googling about these will help you fellow ftu’er @SaJa

Where can I get these apps from, thanks

Where can I get these apps from

Google them and you will get a bunch of resources, Free + paid.

I really hope our fellow 1hackers’ will have do some googling stuffs like @SaM said,before asking basic things.