Success on social media is never overnight. That’s why you never read headlines like, “broke man made $2 million off of his new Twitter account in one day.” But you do gather exciting news such as Buffer’s Product Marketer, Alfred Lua, having secured his job via Twitter.

So why is the first headline a title from la-la land, but Alfred’s job news a reality?

The real factor that differentiates between the two is the time invested in the social network.

In fact, active presence and time invested are the two most important factors that determine your success on Twitter, a platform of 300 million users.

The three tips that this post shares for helping you maximize your ROI from Twitter are based on these two factors.

1. Engage with your audience in the best way possible

Your Twitter is up and running for a few days. Or let’s make another assumption here, it’s been up for years but it’s only gathering dust.

File yourself under the I-hate-Twitter-category and pronounce it dead. Simple.

Not so fast, there.

Your Twitter profile isn’t sparking any interest for a simple reason — you aren’t actively engaging with your target audience.

There’s always a right way to use a social media scheduler.

But simply adding generic posts in a social media scheduler and letting it publish on your profile isn’t the key. In fact, this is the very recipe for failure on Twitter or any other social network for that matter.

To get the most from Twitter, you need to try a different approach starting with:

Show up daily or, at least, regularly

Showing up once in a blue moon is no way to make friends. Would your friends like it if you didn’t show up for a drink? They’ll call you once, twice, thrice. Until one day, they’ll stop.

Or, in a parallel universe, you wouldn’t have any friends if you remained absent for days on end.

The solution? Show up.

The research concludes that your prospects need to interact with at least 7 times before they purchase from you.

That’s SEVEN, not once or twice or even thrice.

Naturally, such interactions are only possible when you use the app regularly, engaging and sharing valuable content (more on that in a bit).

This could be your followers’ content or anyone else’s. The point is to leave a thoughtful comment or strike up a conversation.

To this end, pay attention to what others are saying.

Listen. Listen very carefully. Because listening is what is going to help you leave a comment that leaves a memorable impression on the readers.

And, remember, a plain, boring comment won’t cut it, even if it’s a compliment. This is because viewers can instantly tell you’re leaving template-based comments, which isn’t very heart-winning, to be honest. 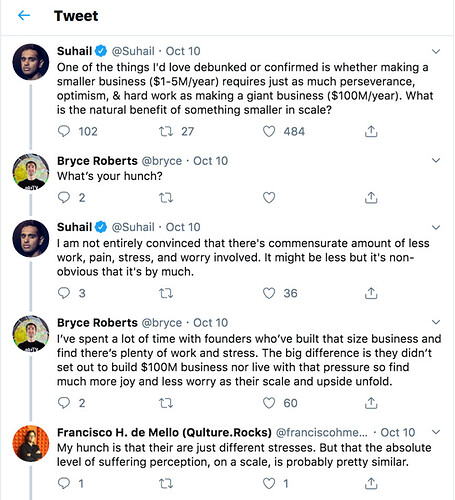 The complete thread from Suhail is here.

Note what Bryce does here:

He first asks a question, which gets the tweeter to reply

Next, he leaves his opinion

And BOOM — the attention is all his (60 people liking his response).

As you engage with your readers, your replies will leave more impressions.

Think of it like this, when Bryce shows up regularly in people’s feed — twitter folks will not only start to know him but also view him as an authoritative person.

When I first joined Twitter, I came across pretty mediocre tips for using Twitter for my business.

Most pieces out there chanted the same mantra, ‘engage, engage, engage.’ But that’s all. No solid explanation. Common sense told me to make friends and talk to them.

An essential element that was missing though was Twitter chats — the frank online communities by the water cooler. In fact, these chats bring together wonderful communities without borders. Or, CWB as I like to call it.

“A Twitter chat is a conversation between people who gather around a specific time, to talk about a specific topic, using a specific hashtag,” as Sharanya defines them.

For example, G2 hosts a #G2Firesidechat on Thursdays every fortnight at 10 a.m. CST.

Jump in and you’ll make lots of friends if you’re in the marketing industry. Or, look for other chats relevant to your line of work if you aren’t a marketer.

Answer questions with insightful answers, sharing your experience and what you’ve learned.

Read others’ answers and respond to them.

Interact will people you talked to after the chat too. @MeetEdgar
Q2. How should you approach networking & marketing to ensure longevity in your business? #solobizchat https://t.co/nzMFPOymzS 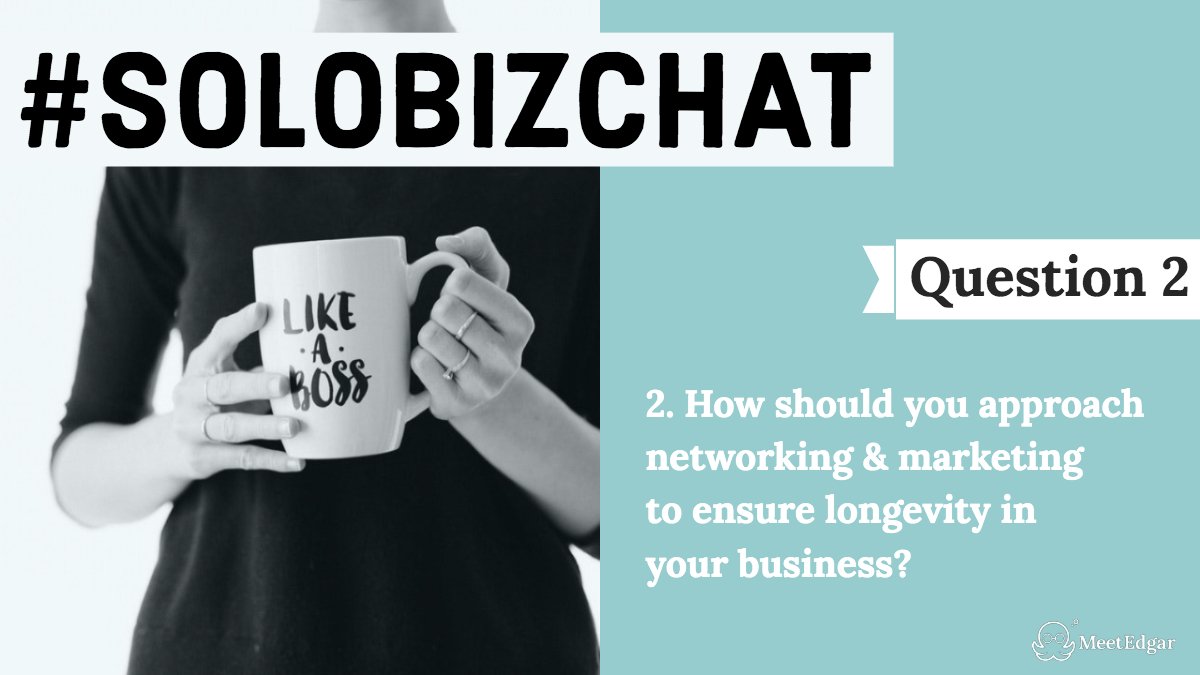 You can’t expect people to visit your profile if there’s anything of value on your account.

It’s like building a mall with no to a limited number of shops in it. No one will come to such a place.

Therefore, what you share counts. But there’s a second part to this too — only share what’s relevant to your brand and audience.

For instance, you can’t share a sales eBook if you’re selling baked goods. But you can definitely share a recipe for baking the best Napoleon chocolate cake.

Now that you get the idea, know that you’ve two ways moving forward:

But here’s the thing, both the steps go hand-in-hand.

Let’s assume you’re offering awesome value in each of these original tweets (the how part of this is addressed in the next section) and getting good engagement.

But do you think you’ll always have enough time to create all this original content?

This type of content not only helps you save time but assists you in building relationships across your industry (hint: hey, thanks for sharing my content and adding your thoughts to it. Now I’ll share yours — as the rule of reciprocity works).

Plus, you learn a lot as curation keeps your reading list warm.

However, make sure you don’t just copy the headline of the article you’re going to share. Instead, read it thoroughly so you can caption it adequately.

Note how to exhibit A and B differ from each other: 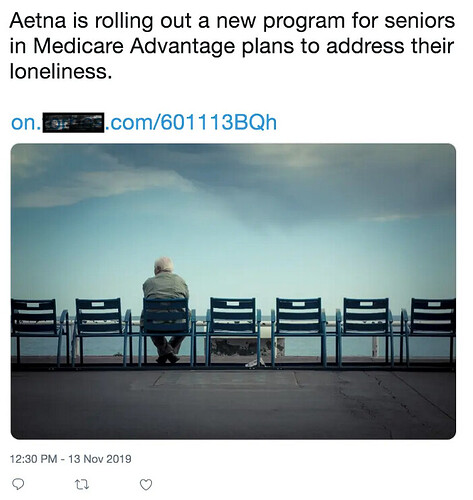 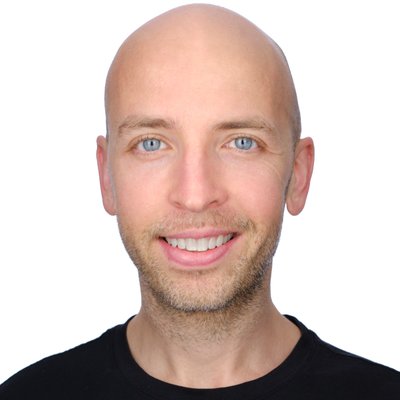 In Exhibit A, the person behind the Twitter handle shares the news in a pretty boring manner. That’s all.

Exhibit B, however, shows that there’s real work that has gone behind the scenes. The one behind the handle has read, shared his opinion, and credited (by tagging) the relevant person too.

No wonder, it’s getting more hits than the other example.

Sharing too much-curated content shows you off as a lazy person even if you’re captioning the content properly.

All your efforts will only send viewers to other sites.

So didn’t you just lose sight of your chief marketing goal here? Spreading awareness about your business and so on…

A backstage look at your business

Your achievements for the day/week/month

A life or business update

Be sure you share each of these without fluff, redundancy (repetition), and in the most engaging manner. Wondering how to write the perfect tweet?

The more your audience can relate with you, the more they’ll/’d engage with you. It’s as simple as that.

A case in point is Gareth over at That Content Shed with a follower pool of freelance writers: Ask a question or add a CTA

The goal is to tell the reader what you expect from him/her.

For instance, if you ask your viewer a question, he’s more bound to comment on your tweet than otherwise.

Keeps you authentic. It truly does since running a business isn’t a bed of roses. But be sure to not overdo it.

And, don’t use this emoji

with it specifically (and no, there’s no study claiming that — It’s just plain aversive).

Buffer’s investigation on adding images to tweets confirms that tweets with images show a 35% spike in retweets and 18% more clicks than those without images.

Before you go about adding any image though, make sure it’s high-quality and relevant.

In addition to pictures, you can share memes, GIFs, and even a plain graphic such as this:

Or, tap into the video:

The point is to talk to your audience, which is the golden rule for success on any social media network.

Therefore, your message should be intended toward making conversation and sharing the “we’re in it together” message.

Besides, emphasizing on ‘I’ instead of ‘we’ shows you off as self-centered, which isn’t a very likable trait.

Get straight to the point (don’t aim for novels)

While Twitter’s 280 character limit doesn’t leave you with any other choice, it’s imperative to point out that interesting tweets are punchy by nature.

Get straight to the meat of the matter. If your message is important and needs more words, then make some space by shortening the link you’re adding using Bit.ly or Replug.

Initially, it can be hard to attract the right audience to your Twitter profile. However, with these tips – engaging, sharing valuable content, and putting the time in writing interesting tweets – you’re sure to ace your Twitter game. (Source: medium)