The World of Torrents (How it Works?)

I found this somewhere and I thought it’d be nice to share it here. Many of use torrents but we dont know about how the whole underground torrent community works. 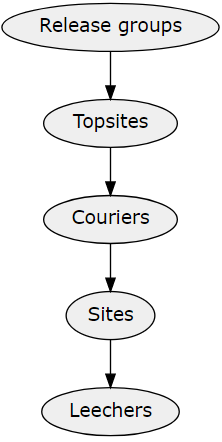 The above image shows the hierarchy level of the warez/torrent world.

RELEASE GROUPS - These groups are sometimes run by few people and sometimes by just an individual person. But not all of these groups release on torrents. Some of these groups hate torrents and anything to do with peer to peer. This is where the real secret trading goes on.

There are two types of Release Groups:

SCENE GROUPS - Diamond, Reloaded, Razor1911 etc are all scene groups. The Scene has no central leadership, location, or other conventional distinguishing marks of existence, but some general guidelines apply globally, considering the historical usage of the term and the history of the communities the term has been used to represent. These guidelines include a rigid set of rules that groups must follow in releasing pirated stuff. These groups “hate” torrents, usenet, rapidshare and all other peer to peer programs such as limewire etc…because such programs expose your ips to the public and other anti-piracy organizations and is a big risk for them to expose their members. By not releasing stuff via this method they maintain longevity and secretiveness and a constant supply of warez.

So then you ask so how come all their stuff is reaching the torrents?

This is where the next set of releasers come in.

TOP SITES/FTP SITES - FTP servers connected to high speed lines minimum 100Mbit to 1Gbit to multi-Gbit. FTP is another way of transferring stuff but much secure as it uses SSL encryption so it is very very hard to snoop around an FTP server.

Every FTP site has certain sections on the wish of its owner who owns the servers (eg. TV-XVID, TV-X264, DVDR, XVID, X264, APPS, GAMES, XBOX360, WII). These are basically the most important sections but other FTP sites could have foreign sections such as French, Spanish, German, Italian etc depending on the FTP owners nationality and his needs. Each section has its own rules such as :

TV-XVID — All US Scripted TV shows only…

WII - Only PAL Games allowed (if the owner is European)

. . . and so on and so forth for other sections. Every one has different rules and racers have to adhere to every FTP sites rule.

COURIERS - a.k.a. “Racers” or “Traders” are the ones responsible for the trading of warez between FTP sites.

When a courier races/trades, he earns credits set according to a certain ratio. For example if the owner of the ftp site sets all racers ratio to 1:4; and say there are 2 racers who race Iron.Man.2.DVDRip.XviD-Diamond to the ftp site. Say “racer1” uploaded 400MB of iron man 2 and “racer2” uploaded 300MB of iron man 2 for a combined total of 700MB.

That’s why Scene releases have good quality torrents always because they maintain rules written by owners of various groups and approved by other groups to be a certain standard.

Such as Rules for XviD movies: All xvid movies have to be 700MB 1 CD or 2 CD rip of 1.37GB with certain RIP settings. If “scene” groups don’t follow these rules thy will get “nuked” Its like a university degree, you don’t want to have 10 failed courses, then you are not looked as a smart student. Similarly, a group doesn’t want too many nukes besides its name. It destroys their reputation and doesn’t let them get on good FTP sites.

When they Release something on a FTP site it is known as to “pred” or a “pre”. “Pre” means the release is ready to be raced to other FTP sites NOT “torrent sites”. Remember all scene groups hate torrents and do not want ANY of their stuff on torrent sites. If they see someone on their FTP sites releasing stuff on torrents, his ip gets banned and he gets NFOed sending a warning to other FTP sites to delete purge him and never to allow him anywhere near scene ever again.

Now you ask, well if the scene groups hate torrent sites so much, how come uploaders are able to release so much stuff from these FTP sites?

Because a few uploaders hide their identity and don’t say that they are releasing on torrent sites. Other FTP sites ask for money secretly from p2p uploaders to let them upload to torrent sites. These FTP sites take a risk that if they get busted by other scene groups their ftp site will be NFOed and will be shut down and the owner of that FTP site will be considered supporting “p2p” or “torrents” forever and he forever will be banned from Scene. Uploaders have to be very careful in hiding their information so that they don’t get caught!

UPLOADERS - are ones responsible for uploading torrents to “leechers”.

LEECHERS - are ones downloading the torrents.

In Summary, a release gets “pred” by “scene” groups such as Diamond, reloaded, razor1911, , etc on “FTP” sites and then those releases get traded to other ftp sites from where on few uploaders who hide their identities…upload it to torrents. An UPLOADER has nothing to do with the release itself. He is just a messenger. DO NOT blame the uploader for a faulty release, as it is the groups fault that their release is not up to the mark . Always respect this knowledge, never go around mailing the scene groups if u are a torrent user. That brings unnecessary attention and reveals your lack of knowledge and puts the Uploader as well as the site at risk.