The reason why we use @ for email addresses | Explained

The @ symbol means “at,” but these days it doesn’t make much sense. I’m not actually “at” Gmail, whatever that means.

To understand why a symbol called “at” was used, we need remember is that the internet and email were around well before the world wide web. In other words, there was a global network of computers connected to each other well before webpages or browsers to display them existed. 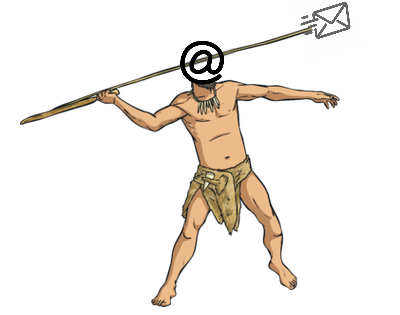 At that time, you only have computers at your workplace or university. Roughly speaking, you go to work, log in to a computer with your username and password, type up your email, and tell the computer which other computer to send the message to and which user the message is for.

Using a clever system that’s pretty much the same as the one that we use today, a decentralized constantly changing network of independent routers nonetheless manages to figure out where this other computer is and which path of wires will efficiently transmit your message there from your computer.

As a result, your message successfully arrives seconds later. Then, when your friend goes to work and logs in to their computer with their username, the computer informs them that they have a message, and your friend can read about how your day went.

If your friend is at MIT, uses a computer whose name is biohazard, and has a username of bob, then you’d address your message to [email protected] Unlike these days, when I’m not actually at Gmail when I read email, Bob is actually going to be at the computer named biohazard when he reads your message, so the use of the @ symbol actually makes sense.

Of course, in reality, MIT probably had a dedicated server that dealt with emails with the unimaginative name “mail,” so you’d really send your message to [email protected] Then, when Bob logs in to biohazard, biohazard will ask mail for any emails to the user bob and deliver them to Bob.

I’m also simplifying a bit because the @ symbol was used even before the global network called the internet existed. Before then, there were still local networks connecting computers within companies or universities. Some of these networks even connected faraway places, but the key difference was that each network was owned by one organization that could keep track of the network. These networks had the same capability of sending messages between users, and the @ symbol was first used in one of these networks and then became standard.