The Best VPN Services To Secure Your Online Activities ⭐

Everything is being tracked nowadays, from your activities on the internet to your phone and computer. Each click, each website you visit, they are all being tracked. And there are also services that are only available in specific regions, like Netflix – which is a bummer if you want to watch something but couldn’t.

Good thing there are Virtual Private Networks (VPNs) that deal exactly with this problem. The simplest way of understanding VPNs is that they redirect your internet traffic to a secured location, obfuscates it, and sends it out to the wild — and when the requested information is sent back to your device, it is first sent back to a secured server before it reaches you again. (Source: hongkiat)

These locations could be anywhere in the world, so no one knows your actual location, who you are, and which data it is you sent out and received. This simply means that no one will ever know what your internet activities are.
Now that you get some idea of how VPNs work, I am going to list some of the best VPN services for ensuring secure online activities. Let’s go. 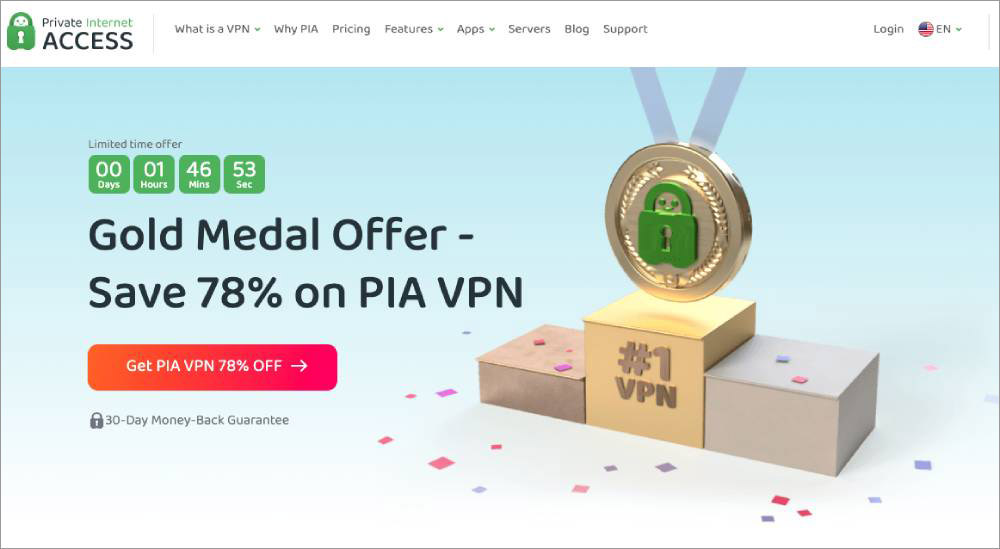 Private Internet Access VPN or PIA VPN is an excellent VPN service that is recommended by many. It has a well-designed app, users can secure up to 10 devices (which is a lot compared to other VPN providers), and for the price, that’s quite cheap. It is also among the top 5 VPNs in terms of reviews and testing.

PIA VPN has 3335 server locations in 33 countries spread around the globe. It also has a No Logging policy with 128-bit AES (default), OpenVPN, and more. It has an average of 80 Mbps download and 30 Mbps upload speed. 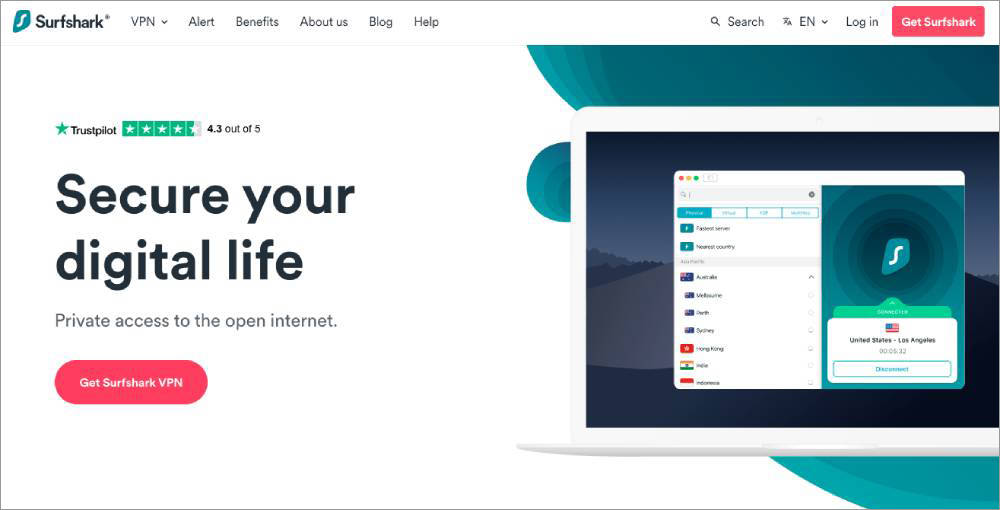 Surfshark VPN protects its users privacy online on all devices and operating systems. You may use unlimited devices for just one subscription, which is a great deal when compared to other VPN services. It also blocks ads and cyber attacks with CleanWeb.

You may even escape restriction through Surfshark as you can still keep your digital freedom while traveling to internet-restricted countries.

It has 3200+ server locations in 65 countries. All servers are P2P friendly with a strict no logs policy and private DNS on each server. The average speed of Surfshark is 85 Mbps download and 60 Mbps upload speed. 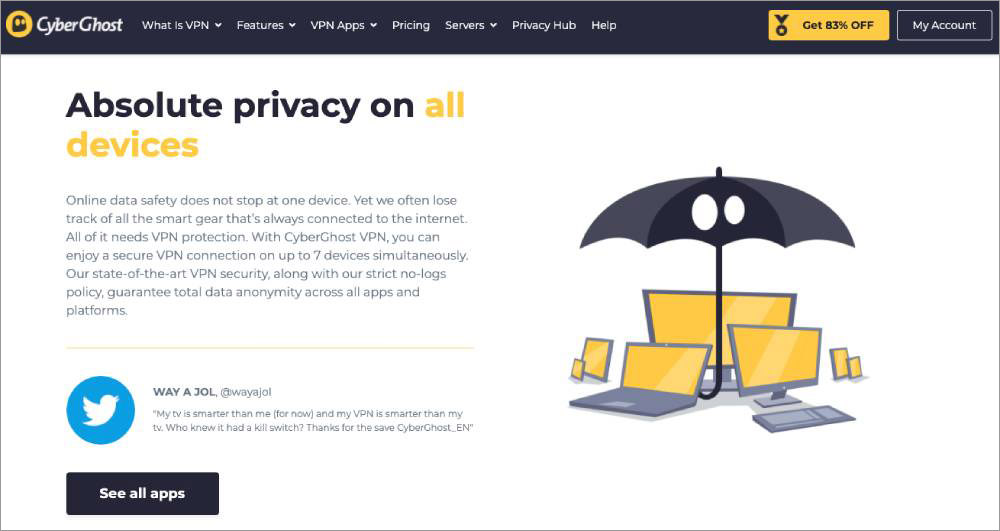 CyberGhost VPN offers a 45-day money-back guarantee to allow you to test the applications and determine if it is perfect for you. 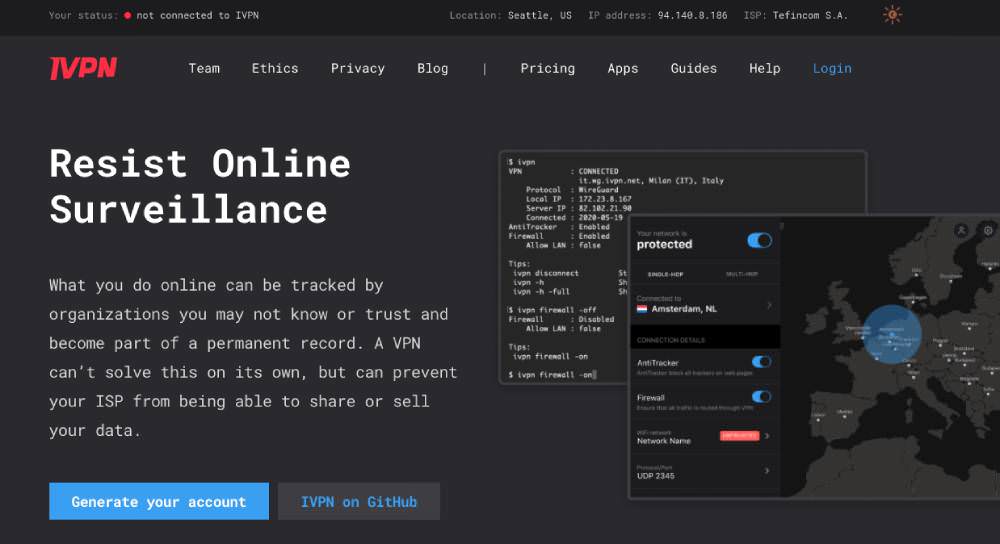 According to a third-party audit, IVPN does not log any user behavior related to the use of the VPN service. It has a privacy service, so when you join up, they will never collect or store any personal information, including your email address.

They accept cash and Bitcoin as well. All servers that manage the IVPN service, including email and live chat, are self-hosted and maintained by IVPN.

Its network is made up of 77 servers spread over 45 locations. OpenVPN and L2TP/IPSec are the protocols they offer, and they use 256-bit AES and 4096-bit RSA encryption.

The client’s default protocol is UDP, but you can switch to TCP if necessary. They also don’t provide proxy services, instead opting for secured VPN connections. The average tested speed is 59 Mbps.

IVPN’s Price Plans is a little complex as they have different pricing tiers based on different tiers. 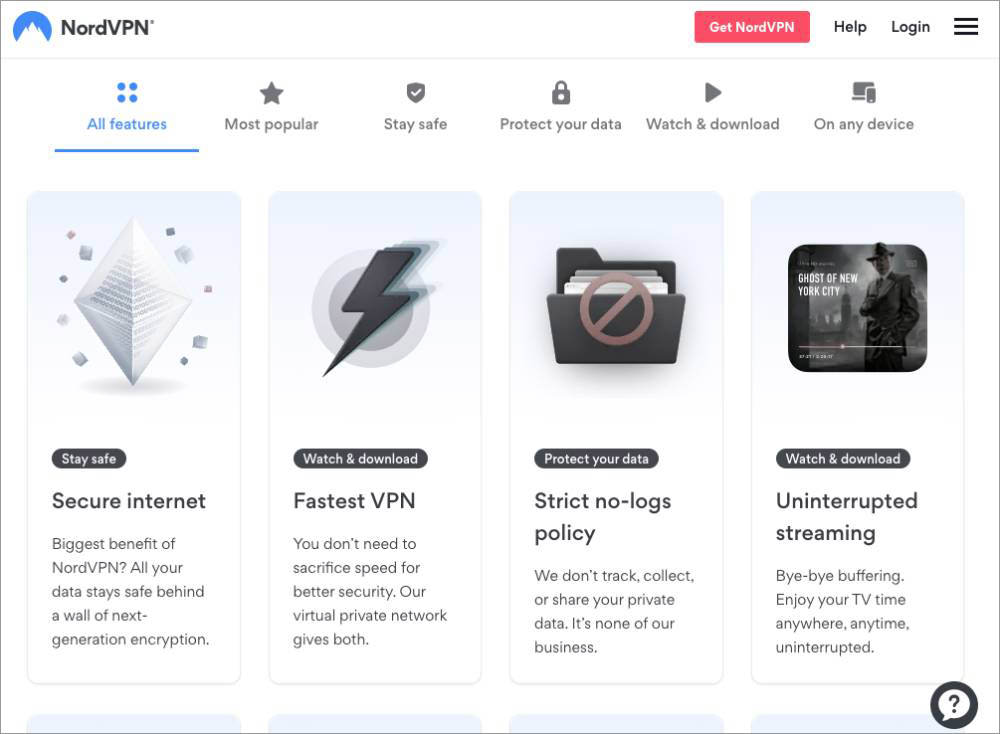 NordVPN is a service that provides a safe and secure online experience both for individuals and professionals by securing and encrypting the flow of online traffic – to and from the user’s device and out onto the internet.

It is available on all devices – iOS, Android, macOS, Windows, and Linux and integrates with popular browsers. NordVPN has a No Log Policy, meaning your data is secured even if there’s a security breach — because there are no logs, to begin with.

NordVPN promises a safe, fast, and stable connection wherever you are in the world. It is available in 60 countries, with 5,307 servers all around. Users can freely change their connection to any of these servers. On average, it has a speed of 115 Mbps. 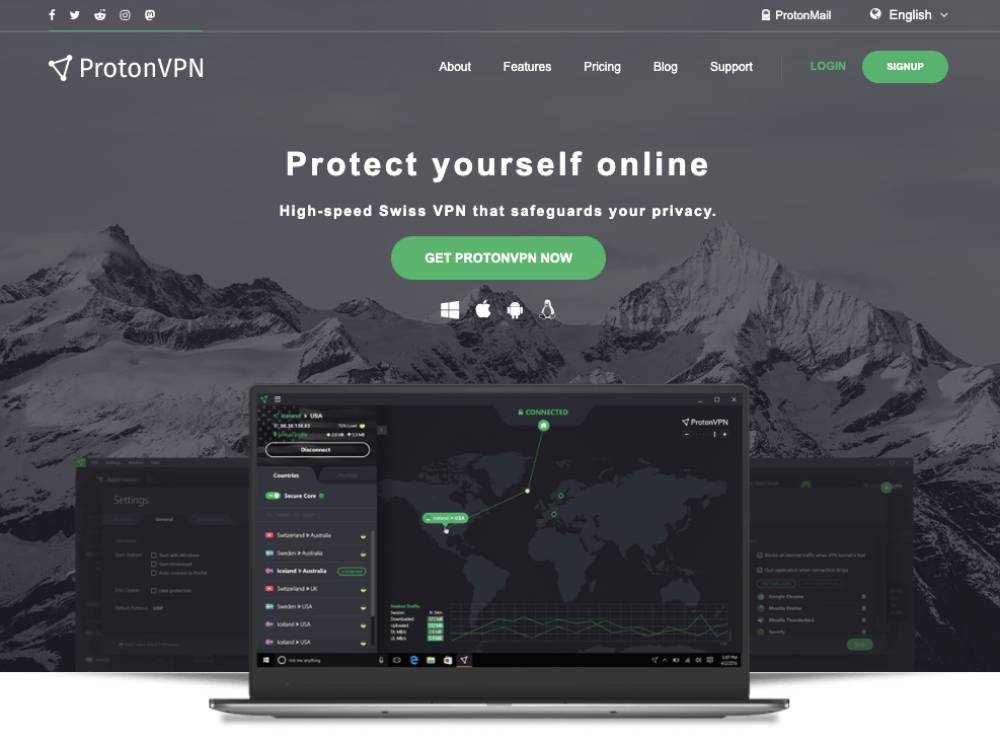 ProtonVPN has a proven track record when it comes to fighting for online security and privacy. The VPN is devoted to staying on the front lines, whether it’s confronting governments, educating the public, or training journalists.

It was made by a group of engineers, developers, and scientists who are passionate about the Internet’s future.

No data logging is to be expected. ProtonVPN’s no-logs policy is backed up by annual transparency reports. They pose themselves as a VPN that offers limitless bandwidth and dedicated P2P servers.

Also, with download speeds of over 60 Mbps and no IP address blacklisting, Netflix and other streaming websites work smoothly. They have 1,287 servers in 55 countries. 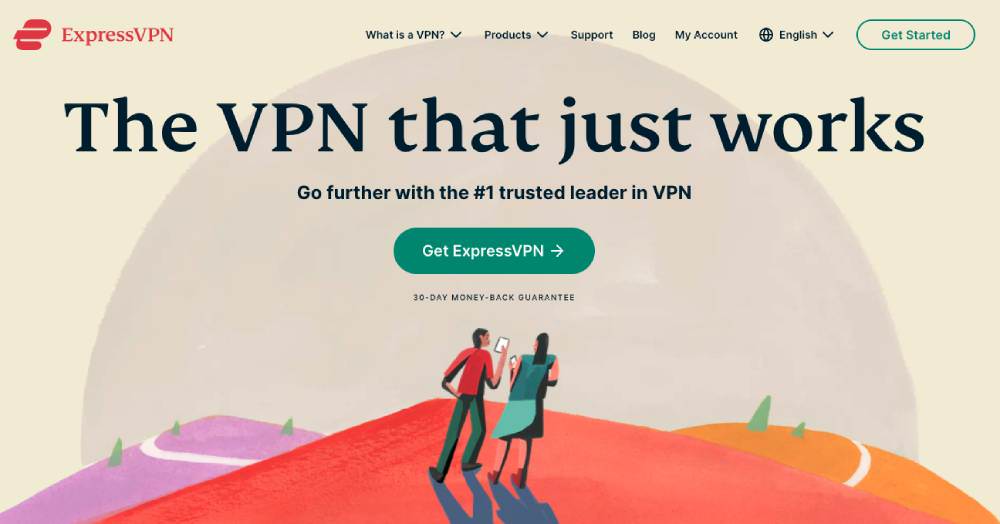 ExpressVPN is a VPN service provided by ExpressVPN International Ltd, a corporation based in the British Virgin Islands. The software is touted as a privacy and security tool that encrypts and conceals users’ IP addresses.

The tools uses Advanced mathematics in AES-256, the standard used by security experts throughout the world, to protect your data.

ExpressVPN has an average speed of 135 Mbps download and 79.84 upload. It has 160 server locations in 94 countries. There is also a 24/7 live chat support to help you set up and troubleshoot if needed. ExpressVPN also does not log data, DNS queries or anything that could be used to identify you. 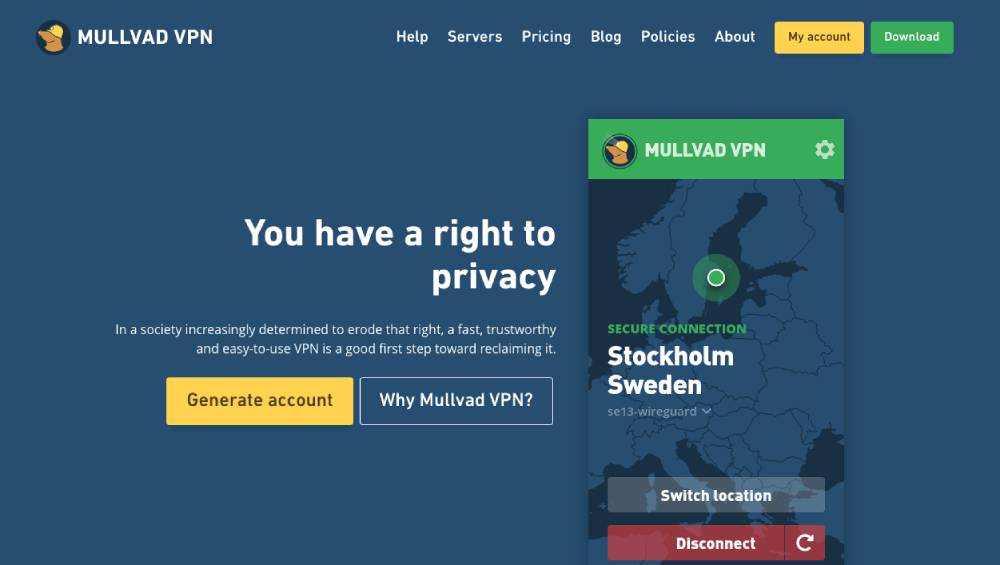 Mullvad VPN is another VPN service that is steadily on the top 5 of testings and reviews for several years now. It has a total of 764 servers around the world, which, when compared to other services that have at least 4,000 servers, really pales in comparison.

But that shouldn’t dissuade you from trying it out, since they offer really good features and privacy and security is top-notch. Its average upload and download speed is 89 Mbps

Mullvad VPN offers a monthly flat rate of around $5.90/month or €5 no matter how long you want to subscribe. 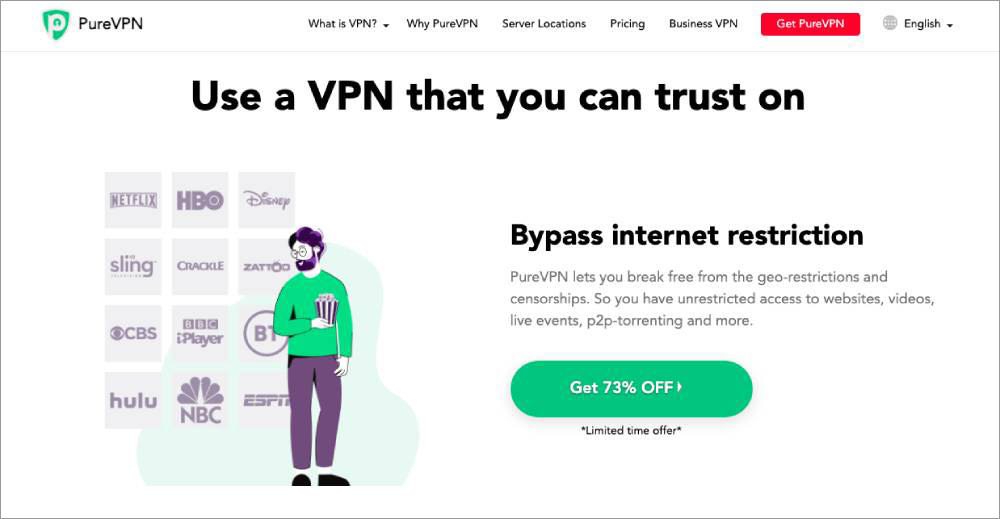 PureVPN has a global network of 140+ countries, 180+ total locations, and 6500+ VPN servers. PureVPN uses virtual server locations to provide customers with a secure, fast, and reliable connection. The number of servers and serviceable countries is insane when compared to other services.

But depending on where you are located and connecting to, the average speed can range anywhere from 30 Mbps to 125 Mbps. 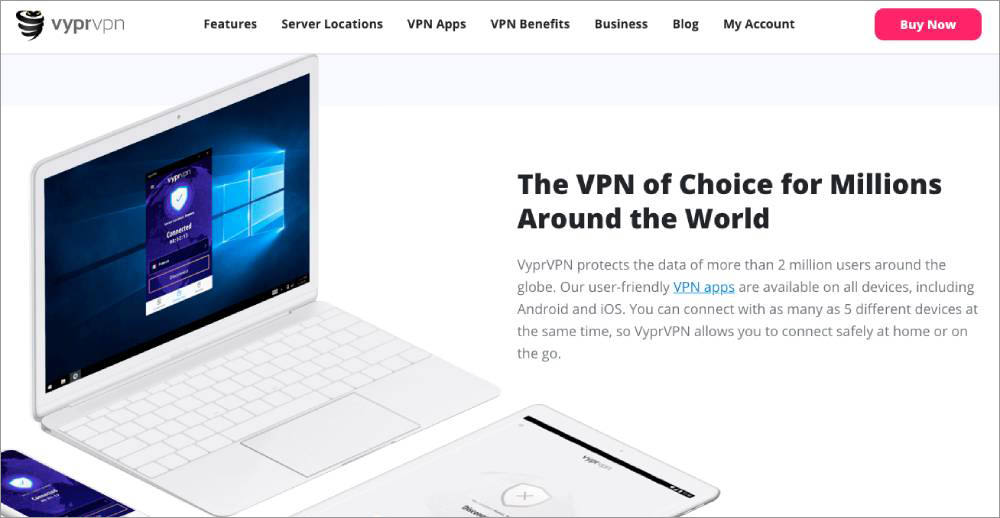 VyprVPN is a security and privacy-focused VPN provider with over 2 million users worldwide. It supports all devices and operating systems. Users can cycle through 70 countries, with over 300,000 IP addresses to use to obfuscate the users’ location.

In total, it has over 700 servers across North and South America, Asia, Africa, Oceana, and Europe. VyprVPN also deals well with overloading servers by automatically switching people around during peak times, without bothering its users too much. On average, its upload and download speed is at 44 Mbps.

Here’s a table to help you visualize things faster.

Securing your network is becoming more and more important as the days go by, not because you are hiding something, but because you want your information to be safe. You need to take great care of your privacy, especially when browsing unknown websites, or if you’re connected to private WiFi.

Attacks and leaks can happen anytime, and you might not lose anything from it. But why risk it, right? Also, for entertainment or work, you can bypass certain restrictions through VPNs — for a more open and secure world wide web.

Wow. This is an excellent article. Kudos.

Here are some discounted prices I found: