A programming language is a human-readable way of telling a computer what to do. Any language uses a series of symbols that represent precise instructions for a computer. The combination of these instructions creates a program. There are thousands of programming languages, and new ones keep being created. This means you have many possible ways to build your website. With so many options, how can you make the right choice?

Though they may seem alike, no two languages act the same. When deciding on a programming language for web application development, don’t fall for a choice that’s hyped. Focus on matching a language’s tools, libraries, and support with your business needs.

Our market researchers and web app developers have collaborated to create a list of the top seven languages for web application development in 2021.

Google “top programming languages” and you’ll find surveys that name different options as the best according to various criteria. For example, the PYPL index is generated based on the frequency with which language tutorials are googled, while the TIOBE Programming Community index considers the number of third-party vendors and developers who use a language.

These indexes are favored by software engineers who want to see whether their programming skills are in demand or they need to level up. As for business people, they’re left out of the loop and don’t know the best language to develop a web application.

Python is the fastest-growing programming language, with Django and Pyramid as its most popular frameworks. In 2018, Python showed a 456% growth in popularity over the previous year, and its consistent rise continues. 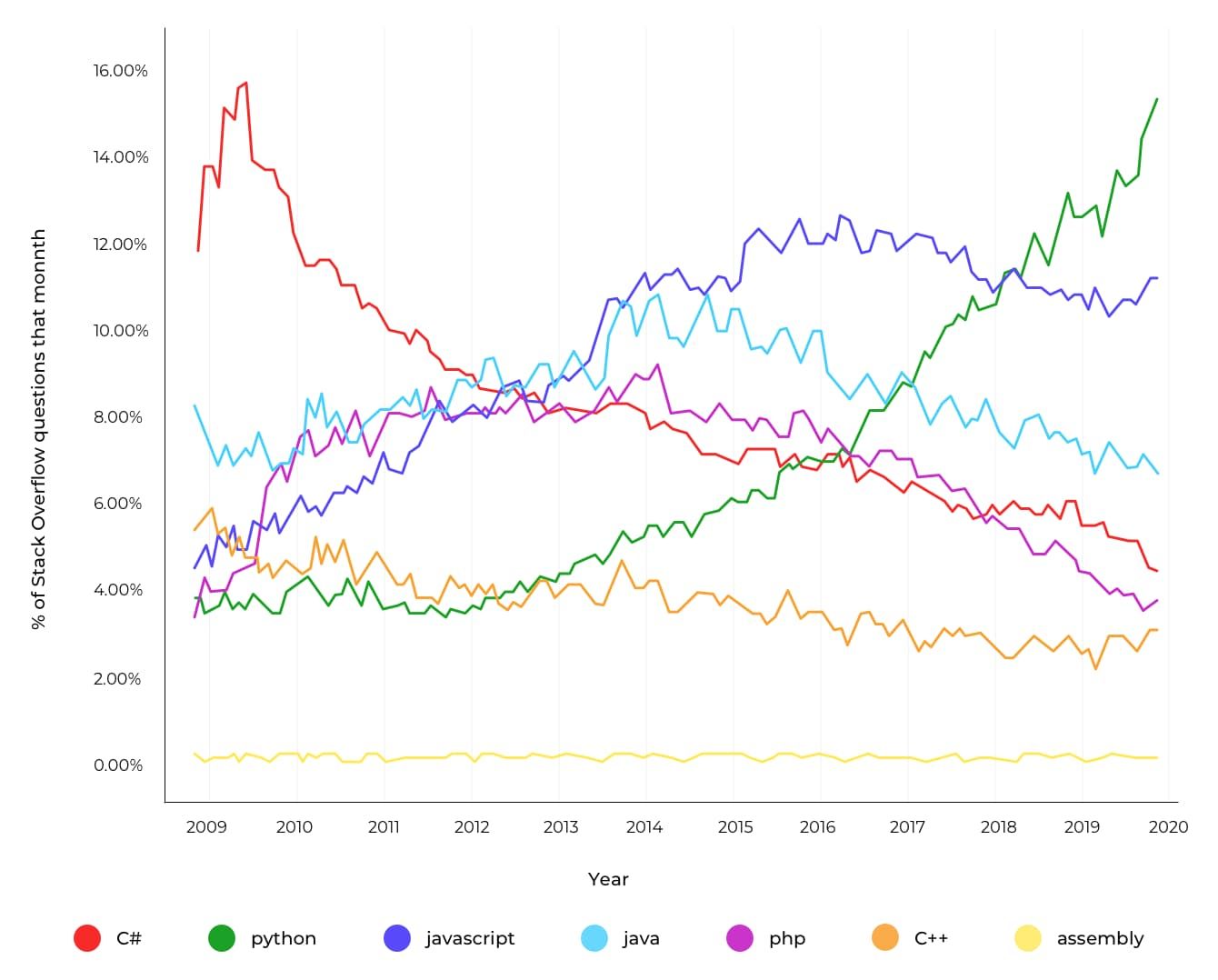 The simplicity of coding even complicated structures in Python is a big reason why web application development using Python is on the rise. Python helps software engineers cut development time from hours to minutes. Check out the infographic below and learn more about why we use Python for web development. 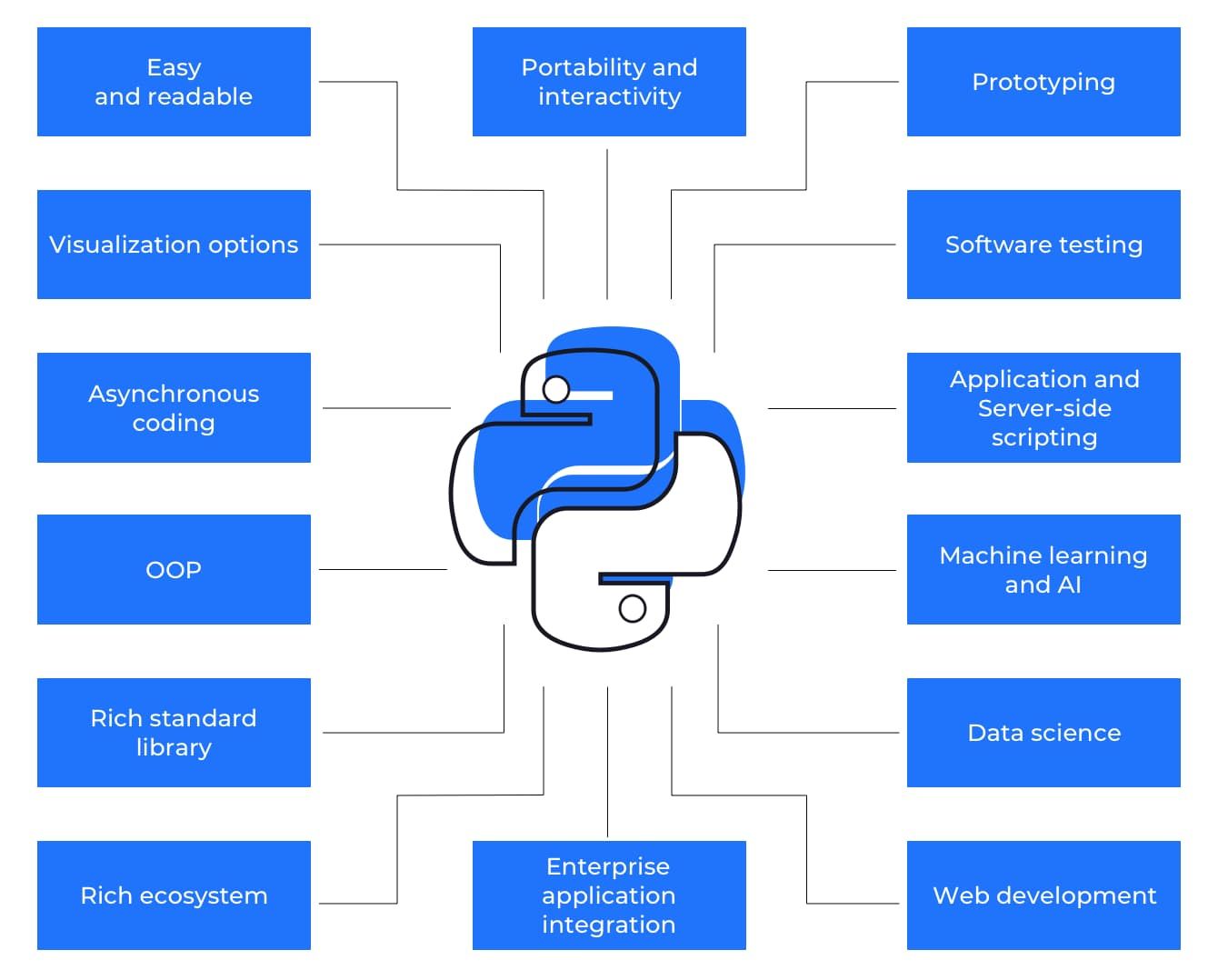 Python helps developers build the server side, or the back end, of an application. The back end stores the database and handles how data travels to and from the server.

Python is known for its many web-oriented frameworks that help developers create functional apps. The most popular are Django, Pyramid, Bottle, Flask, CherryPy, WebApp2, and TurboGears.

Django is used more frequently than other Python frameworks because it has tools for building web apps faster and with less code. This toolkit helps developers easily add main website components like authentication, management panels, and structures for file processing. Without Django, a developer would have to code all these traditional features manually instead of focusing on new components.

The adoption of Python by Google, Facebook, Instagram, Spotify, Quora, Netflix, Dropbox, and Reddit for server-side tasks has brought this language to a new peak of popularity. And it continues to climb.

Programming with Java is popular especially for banking and FinTech web projects since, compared to many other programming languages, Java offers better security and functionality.

According to the PYPL index, Java is now the second most popular programming language, behind Python and followed by JavaScript.

Java has become a popular choice as it enables vertical and horizontal scalability. With Java, developers will need fewer hours and less invasive coding to improve your website’s performance and response times.

Another great advantage of Java for web application development is that it’s a cross-platform tool. The Java runtime environment translates code into machine code compatible with the native operating system, whether it’s Linux, Windows, or macOS. 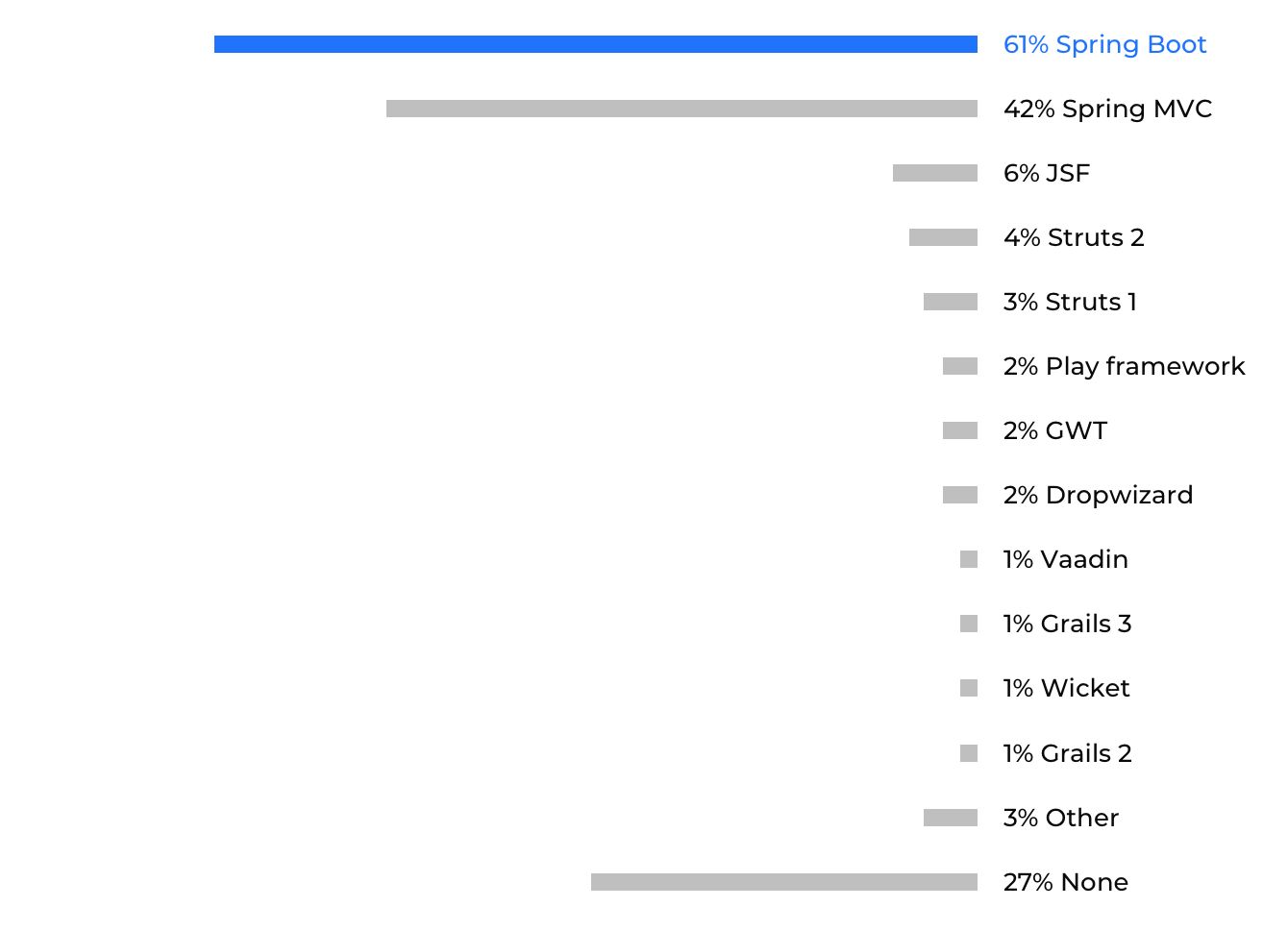 Though Spring provides numerous modules for creating web apps, Spring Boot and Spring MVC have been the most popular two years in a row.

Spring Boot is a combination of the Spring framework and Embedded Services. It allows developers to quickly bootstrap, avoid boilerplate code, and increase productivity. Spring MVC is a model–view–controller framework containing configuration files and ready-to-use features for quick app development.

By the end of 2020, Java was one of the most popular programming languages for web application development, allowing software engineers to build unique apps at lower cost and in less time. It’s expected to remain popular and be used extensively in 2021.

The PHP programming language is dead only if you ignore usage statistics. Though PHP isn’t modern, eight out of ten websites are built using this language. 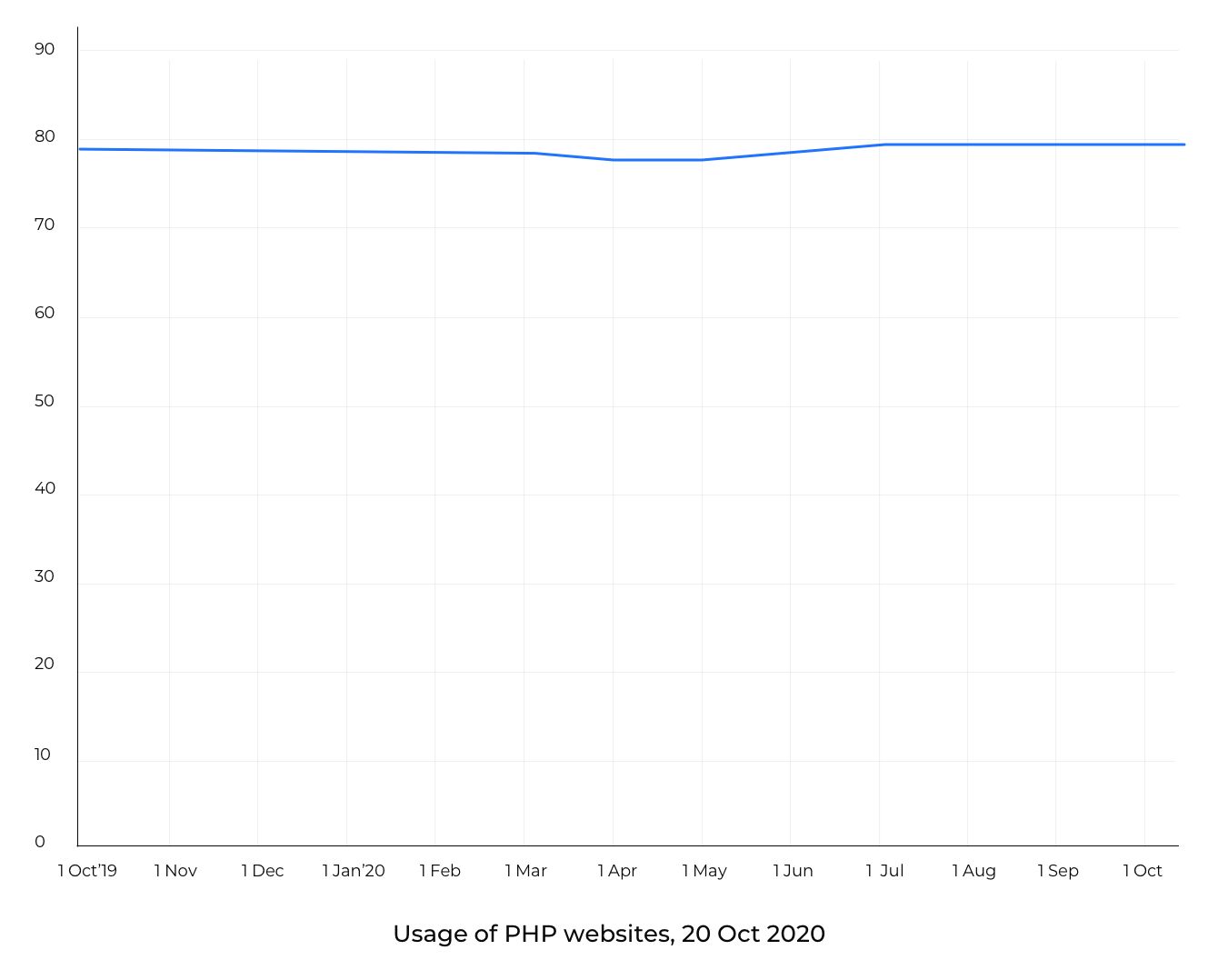 Code written in PHP is compatible with Linux, Windows, Unix, and macOS and supports over 20 databases and most servers. The language’s great customization potential, quick data processing, and smooth integration with different CMSs makes it a good choice for dynamic web pages. The following two PHP frameworks make swift web app development a reality by providing well-organized and reusable code.

Laravel is the most popular PHP framework. It’s an elegant toolkit with a rich set of features that boost the speed of web app development. Laravel gives developers access to functionality like caching, session management, and authentication. This allows developers to skip much groundwork, especially when developing a website from scratch.

Symfony is a highly flexible framework inspired by Django that’s mostly used for handling enterprise apps with millions of connections. Symfony enables developers to either use the entire framework or choose the functions they need, which is an important feature for those who care about modularity.

PHP is often blamed by developers for its lack of dedicated libraries. But each new version of PHP for web app development shows upgraded performance.

Ruby is a dynamic scripting language with high-level syntax. It was created to strike a balance between imperative and functional programming and make code look more natural. Ruby is straightforward and reads like English, making it a popular choice among beginners. 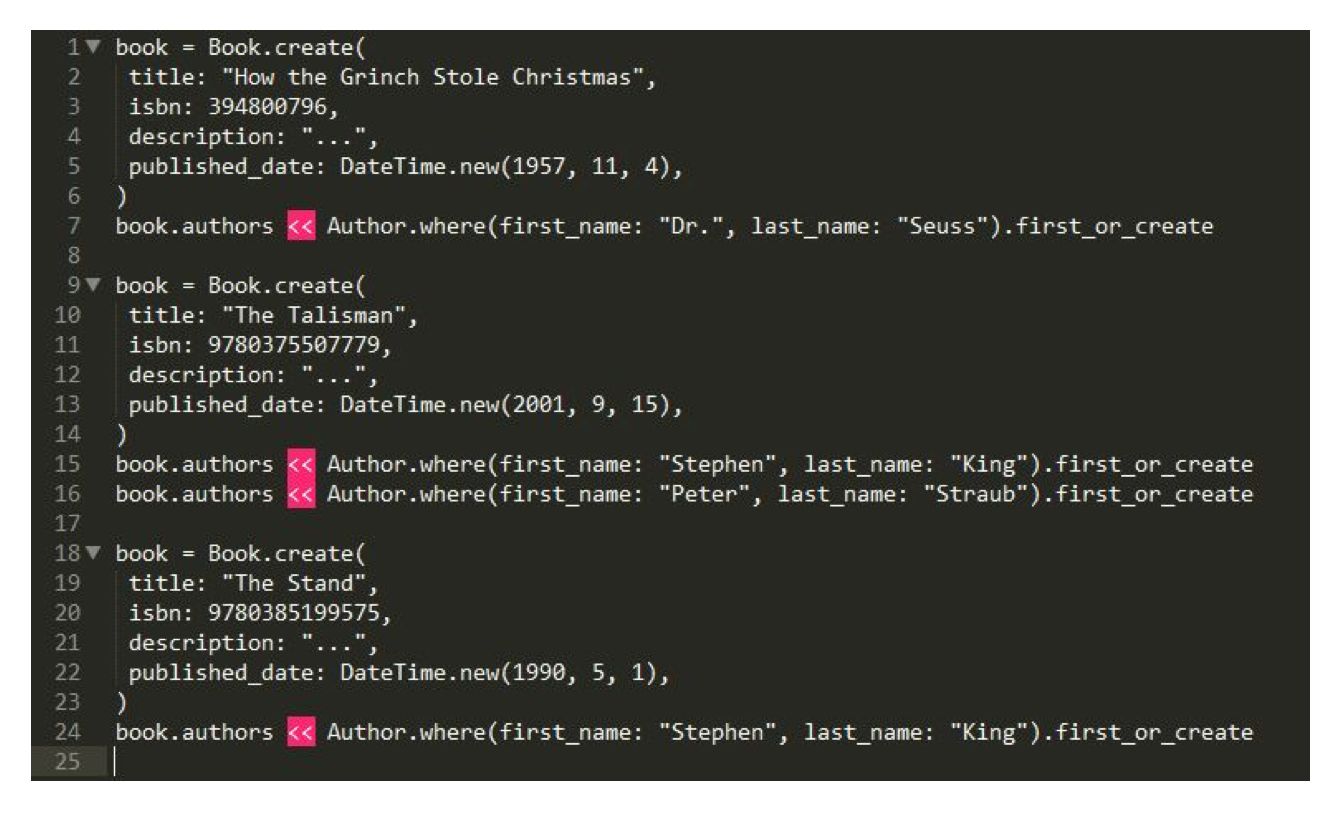 Like Python, Ruby is a general-purpose language and is mostly used for creating web applications. But the Ruby programming language also has other applications including prototyping and data analysis.

Ruby on Rails (RoR) is a popular open-source Ruby framework. Great speed, simplicity, and a pleasing coding experience are three reasons why RoR stands out from other Ruby frameworks like Sinatra, Padrino, Hanami, and Cuba. RoR and Django are very comparable. Each provides many libraries, views, models, database migrations, and controllers — everything a software engineer expects from a framework. Well-documented machine learning (ML) packages in Python and the lack thereof in Ruby are the only notable exception.

So if you intend to create a web app with machine learning elements, go with Python and Django.

JetBrains states that the JavaScript client-side programming language is the primary choice for dynamic web page development. To date, JavaScript is used by 98.8 % of all websites. 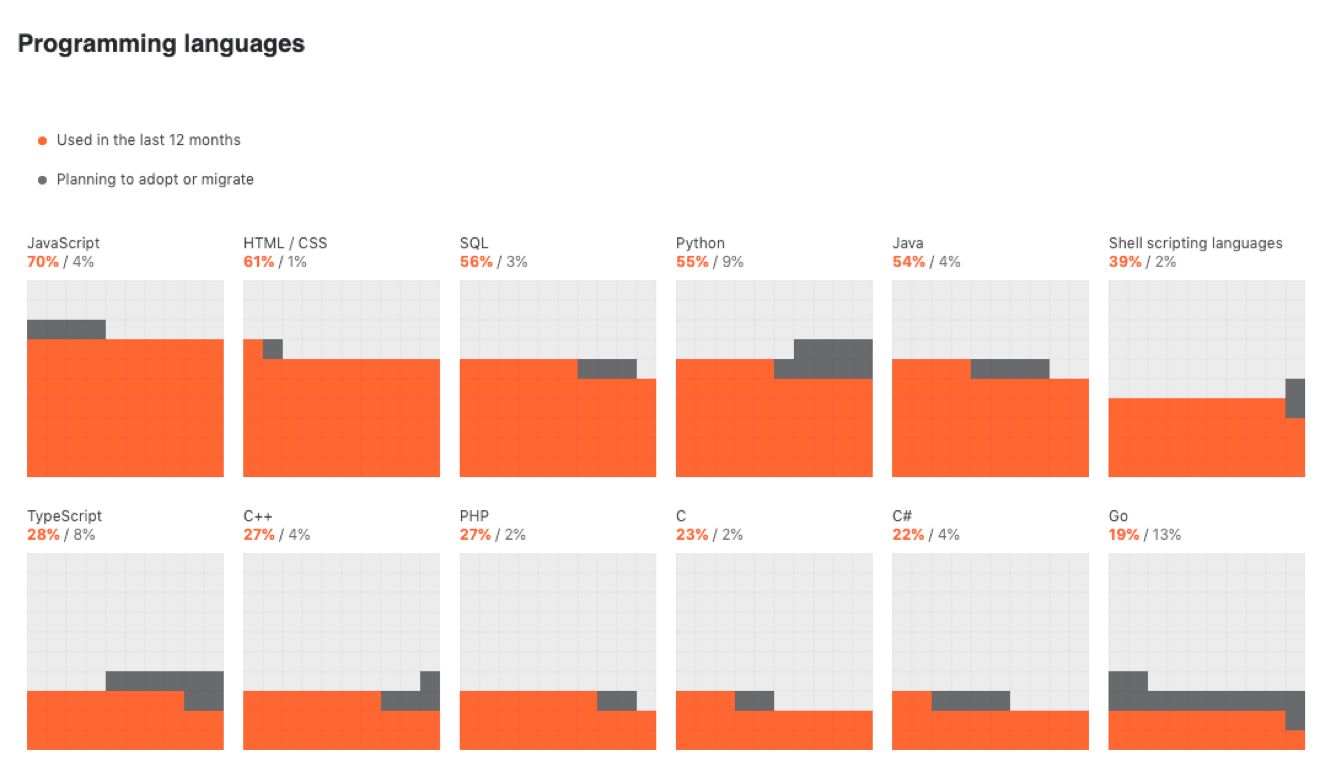 JavaScript code is simple and flexible, easy to write, and easy to debug. What’s more, it can be used inside scripts written in other programming languages.

Instead of being executed on the website’s server, JavaScript is executed on the user’s device. This minimizes server requests and improves the user experience. JavaScript also can turn static websites into web apps by allowing developers to add menu functionality, animations, and hover interactions.

A few years ago, JavaScript developers were mainly using React and Angular. But as the developer community has a growing interest in Vue, all three JavaScript frameworks have taken up solid positions in the software development market. Just check out the number of stars on the GitHub projects for these frameworks. 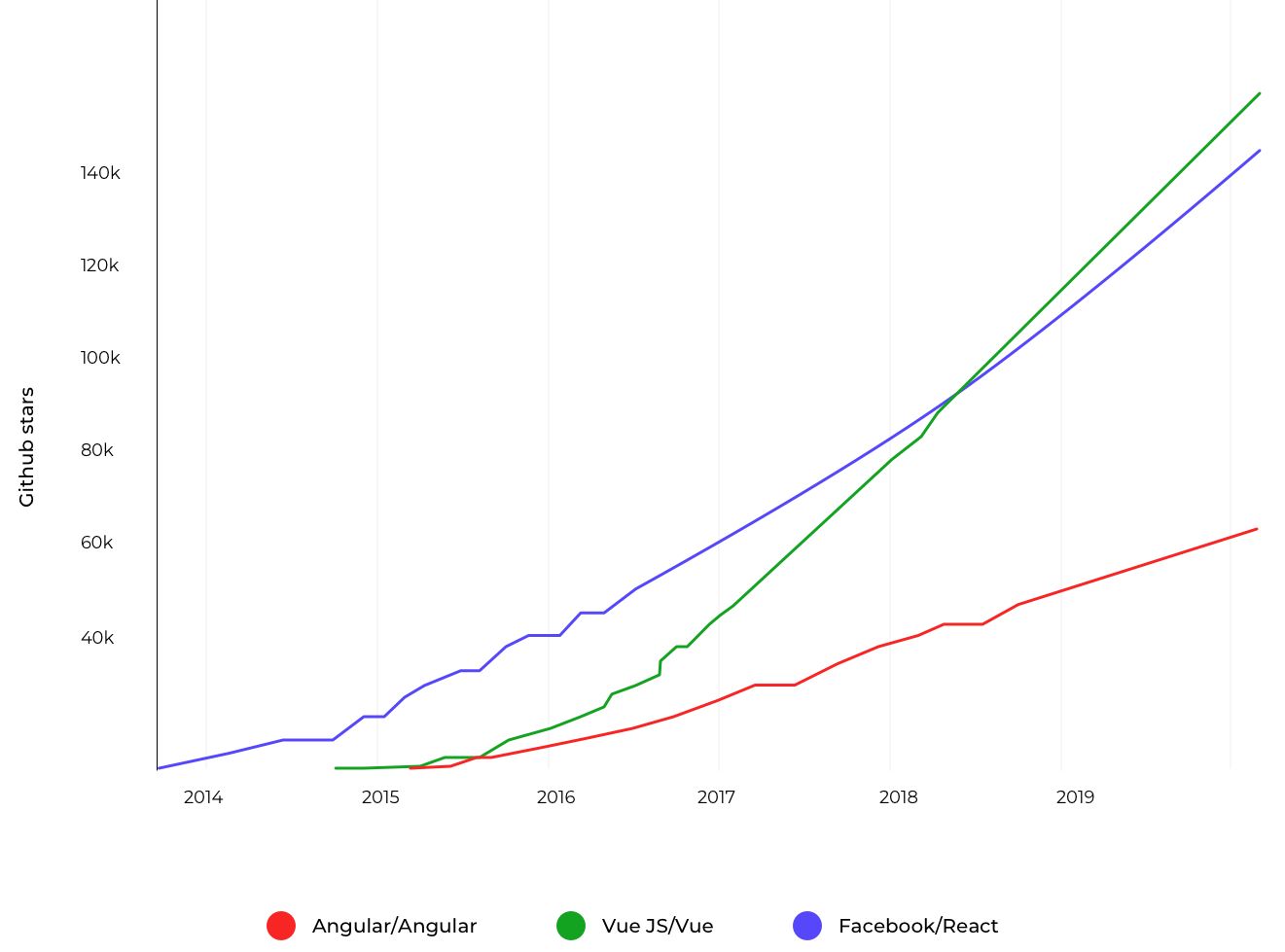 To cover all aspects of modern web app development, most frameworks work with additional tools. Angular can do the job by itself, however. This framework provides quality ready-made templates and components. Some of the best web apps like the Google Play Store, Microsoft’s Xbox web app, Office 365 for web, Netflix, YouTube, and PayPal are based on Angular. Angular has a modular structure that allows developers to organize pipes, services, directives, and other components into separate buckets. These independent components are easy to replace or scale. Plus, Angular is frequently updated, and every new update comes with performance improvements.

React is more like a functional user interface library, not a fully fledged framework. It enables developers to build user interfaces with components that can be changed over time without the need to rewrite tricky code. Furthermore, while most JavaScript frameworks don’t play nicely with search engines and thus reduce search engine rankings, React websites are rendered on the server side, making them faster and improving the SEO.

Web application development using JavaScript Vue.js is on the rise. Vue is considered a progressive framework for single-page app (SPA) development. The idea behind Vue was to code using just a few lines, thus achieving good results with minimum effort. Today, this JavaScript framework is small, beating the bulky Angular and React. You can quickly download Vue and start using it. Vue includes features like watchers, computed properties, and directives that turn a time-consuming development process into a breeze. Plus, it can be integrated into other web apps built in JavaScript.

TypeScript is a flavor or a superset of JavaScript that has become a crucial choice for the frontend development of browser apps. This strongly typed object-oriented language is often referred to as a set of tools, or JavaScript plus extra features.

Why has TypeScript appeared? JavaScript is known for being dynamic and flexible. But the flexibility of this language makes its code prone to errors. The role of TypesScript is to introduce static information within JavaScript code. This static information makes the code less error-prone and easier to read, understand, and debug. 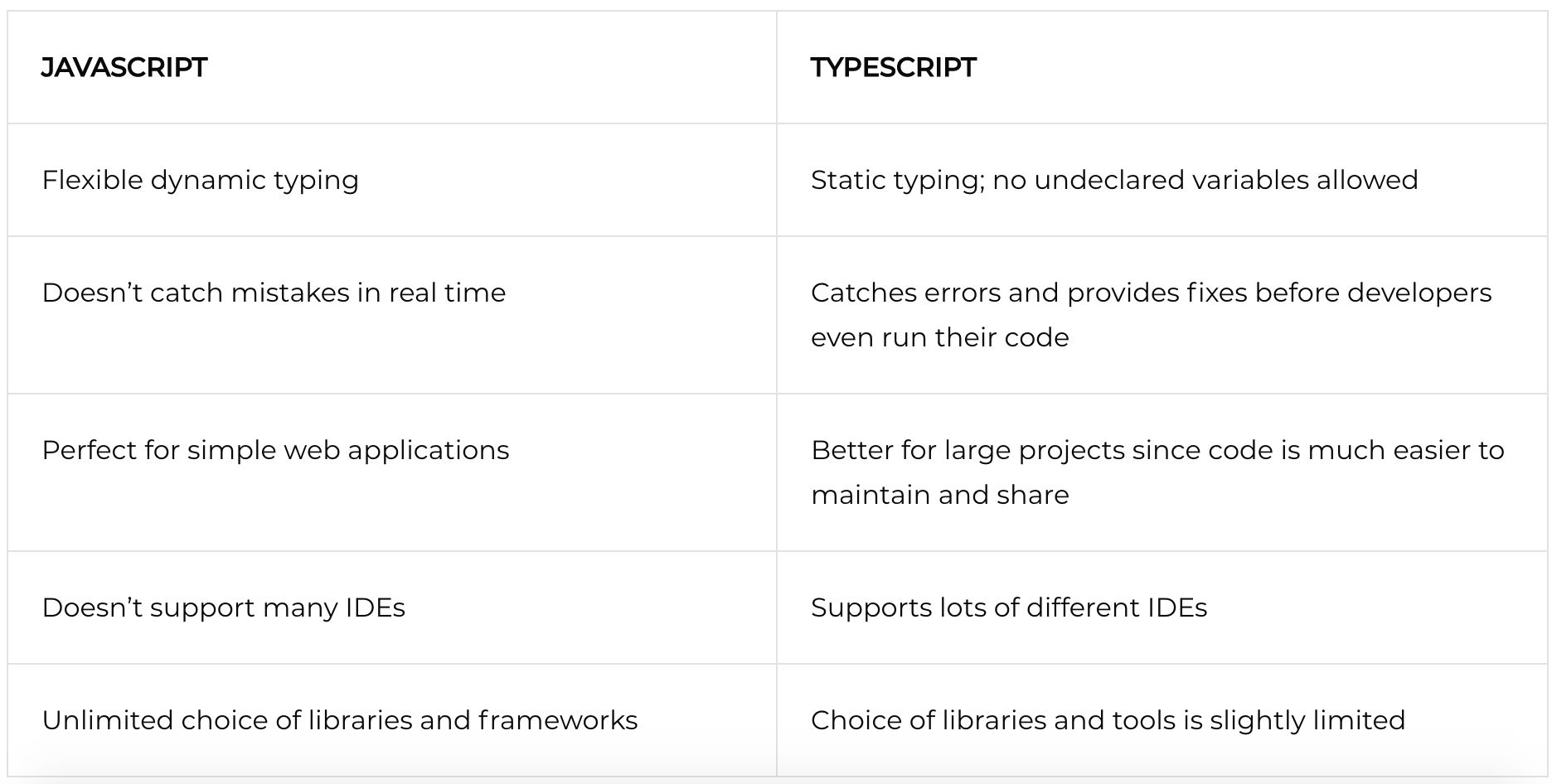 HTML and CSS are programming languages paired to build the front end of a web application. They can be complemented by JavaScript.

HTML is the basic building block of an app. This language dictates the structure and contents of a web page. The main disadvantage of HTML is that it can’t help developers make web apps interactive. To enhance HTML pages with an aesthetic style and interface prompts, add a design, and display all HTML elements, developers use CSS. Check out the specific uses of the HTML, CSS, and JavaScript web application development languages below.

How can you choose the best programming language for web development?

These three criteria can help a business owner choose the right technology stack for their web app:

In addition to these criteria that you should consider when planning how to develop a web application from scratch, these are three factors that shouldn’t determine your choice of programming language: