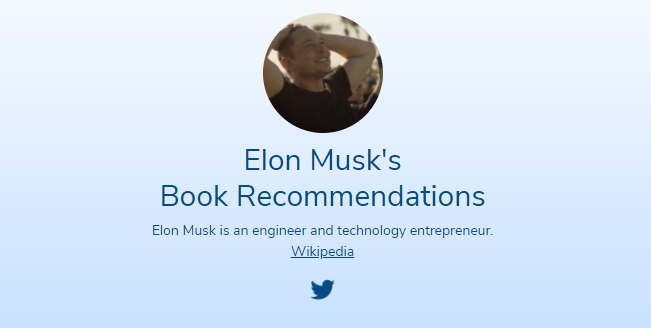 Although his days are presumably filled with Tesla, SpaceX, cyber pigs and lots and lots of tweeting, it seems Elon Musk also finds the time to make reading part of his routine. The billionaire businessman is known for sharing (and oversharing) all his recommendations and thoughts on Twitter, so it’s no surprise that books are part of that.

Most Recommended Books compiled a list of all the books Musk has commented on in the past several years, and you can see all 61 here. But if you’re short on time today, click through to see 11 of the most interesting picks from his list.
The list includes Peter Thiel’s 2014 best-seller Zero to One: Notes on Startups, or How to Build the Future , as well as business magnate Richard Branson’s 2011 book Screw Business As Usual .

Musk also calls a 2004 biography of Howard Hughes “a cautionary tale,” and a 2005 biography of Stalin “One of the few books so dark I had to stop reading.” And for a 2011 biography of Catherine the Great, he wrote “I know what you’re probably thinking … did she really f* a horse?”

His favorite books about space include John Drury Clark’s Ignition! as well as Modern Engineering for Design of Liquid Propellant Rocket Engines . But there’s also Robert A. Heinlein’s science fiction novel The Moon Is a Harsh Mistress and Douglas Adams’ The Hitchhiker’s Guide to the Galaxy . (“My favorite spaceship ever is in [this book].”) And he calls Isaac Asimov’s Foundation series “fundamental to [the] creation of SpaceX.”

Also on the list is Life 3.0: Being Human in the Age of Artificial Intelligence (which Bill Gates also named as one of his 10 favorite books about technology) as well as Frank Herbert’s Dune , which Musk calls “Brilliant,” while noting that Herbert “advocates placing limits on machine intelligence.” In fact, for eight different books on the list he’d added the same cautionary warning: “Hopefully not too optimistic about AI.”

He also says he read Karl Marx’s Das Kapital at the age of 14, and also read Ayn Rand’s Atlas Shrugged (which Musk called “a counterpoint to communism and useful as such, but should be tempered with kindness.”)

But Musk says his favorite book ever is J.R.R. Tolkien’s The Lord of the Rings.

But Musk says his favorite book ever is J.R.R. Tolkien’s The Lord of the Rings