Is it possible to hack into Discovery plus television channel?

TV channels generally keep critical systems away from the internet, so either a hacker finds some part that is inadvertently connected (against policy) or you find another route in. Some TV stations do have remote access for disaster recovery or just remote site access but finding those systems is a lot harder than it used to be and covering your tracks might also be difficult.

check this out
Broadcast signal intrusion

In the past, it was easy, as there was little or no security on the signals, and in fact it was done several times.

For terrestrial signals, all that was needed was to set up a transmitter near the mast to block out the frequency of the incoming signal (this might have been a broadcast signal from another mast, or a microwave link). Transmit your video in place of the “proper” one, and you’re on the air. (The same applied to VHF radio). Cable head ends were also susceptible.

For satellite, much the same system was used, except you needed a powerful uplink transmitter, relatively close to the ligitimate uplink (so the satellite’s receiving aerials could see it).

After a number of such incidents, security was tightened up so that extra signals were added to the transmission, the absence of which would cause the transmitter to shut down.

In current times with digital transmission, the process is vastly more complicated, as the “hacker” has to not only generate the video signal, but also the multiplex data sufficiently complete for receivers to display. 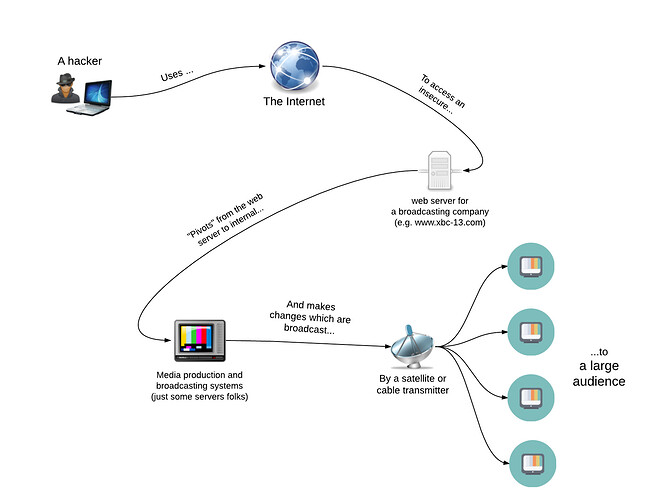 The attacker would need to attack the source of transmission. You cannot hijack random screens. Well, some you possibly could, but they would be commercial digital signage systems and not home screens.

Home screens in smart TVs may be susceptible to exploits, but they are embedded systems and exploiting all of them at once is simply unfeasible.

That leaves you with the only choice, which is to take control of the signal at the source. There’s the original source and the re-broadcast source. Hacking original source will do you no good because re-broadcast runs on a 7-second delay for real-time censoring. You will not see a manifesto broadcast on all channels. The people at controls would block that transmission. There likely are protocols in place for manually cutting off signal if digital methods fail.