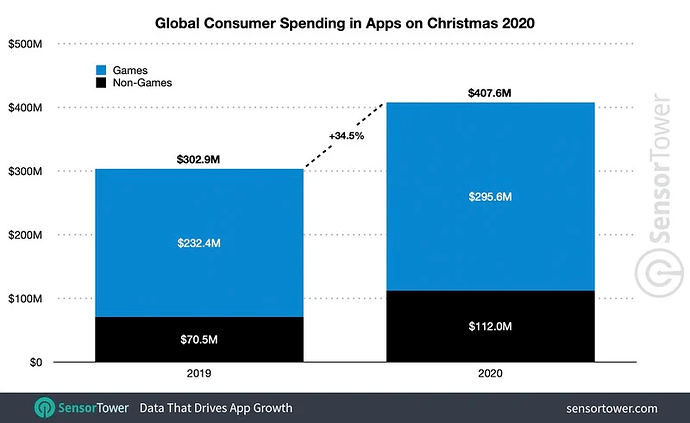 A new report by Sensor Tower reveals that 2020 has been a record-setting year for worldwide spending on the Apple App Store and Google Play Store, which collectively passed $100 billion in a single year for the first time ever in November. From a report:

The trend of increased spending continued over Christmas, when consumers around the world spent an estimated $407.6 million across Apple’s App Store and Google Play. This represents a 34.5 percent year-on-year growth from approximately $303 million in 2019. At the same time in 2019, spending only increased by 17.1 percent year-on-year. Spending on Christmas day constituted 4.5 percent of December’s total spending so far, which reached nine billion dollars globally on December 27. The majority of holiday spending was on mobile games, which climbed by 27 percent from $232.4 million at the same time last year to $295.6 million. Tencent’s “Honor of Kings” was the leading game with approximately $10.7 million in consumer spending, which is a 205.7 percent increase from Christmas 2019. TikTok was the top app for spending outside of games, generating $4.7 million globally. Following previous years, Apple’s App Store captured the majority of spending between the App Store and the Google Play Store, with 68.4 percent of spending, up 35.2 percent year-on-year. The Google Play Store saw $129 million in revenue compared to the App Store’s $278.6 million.