The Windows 10 Taskbar provides quick and easy access to your favorite apps, but it also offers several handy settings you can customize to

The Windows Taskbar lets you access frequently used and currently open apps. It can also be tweaked to work the way you want. You can move it to other sides of the screen, automatically hide it when you don’t need it, change the size of the icons, and more. Here’s how. (Source: pcmag)

Pin Apps to the Taskbar 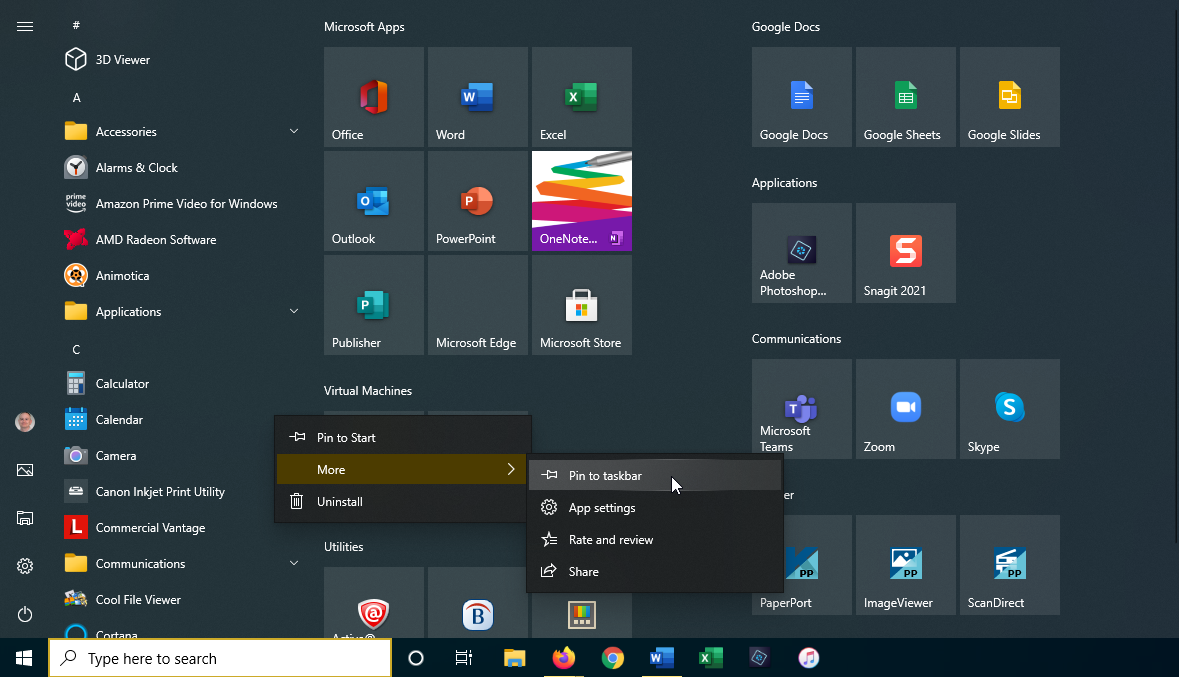 The first thing you should know how to do is pin an app to the Taskbar. You can do this from the Start menu, Start screen, or the Apps list. Click the Start button and right-click on any app icon or tile. Select More > Pin to taskbar to lock the app to the Windows Taskbar. To remove it, right-click on its Taskbar icon and select Unpin from taskbar. 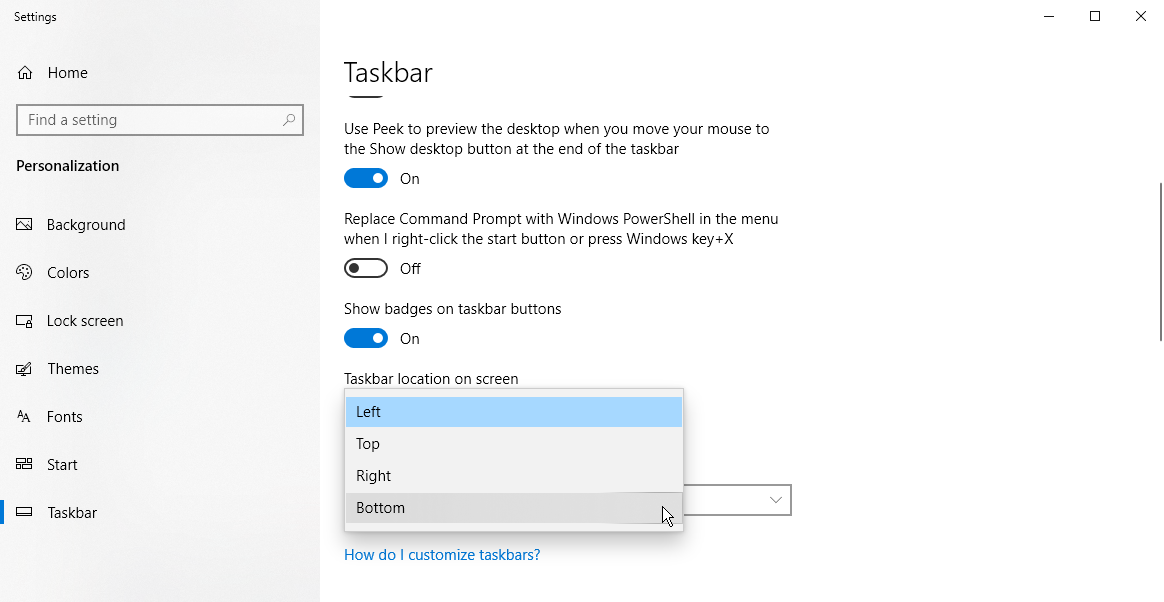 By default, the Taskbar appears at the bottom of the screen, but it can also be moved to the top or either side of the screen. To do this manually, click on any empty area of the Taskbar and drag it to your preferred location.

If you’d rather let Windows do the moving for you, right-click on any empty area of the Taskbar and click Taskbar settings from the pop-up menu. Scroll down to Taskbar location on screen and use the drop-down menu to select left, top, right (as pictured above), or bottom. 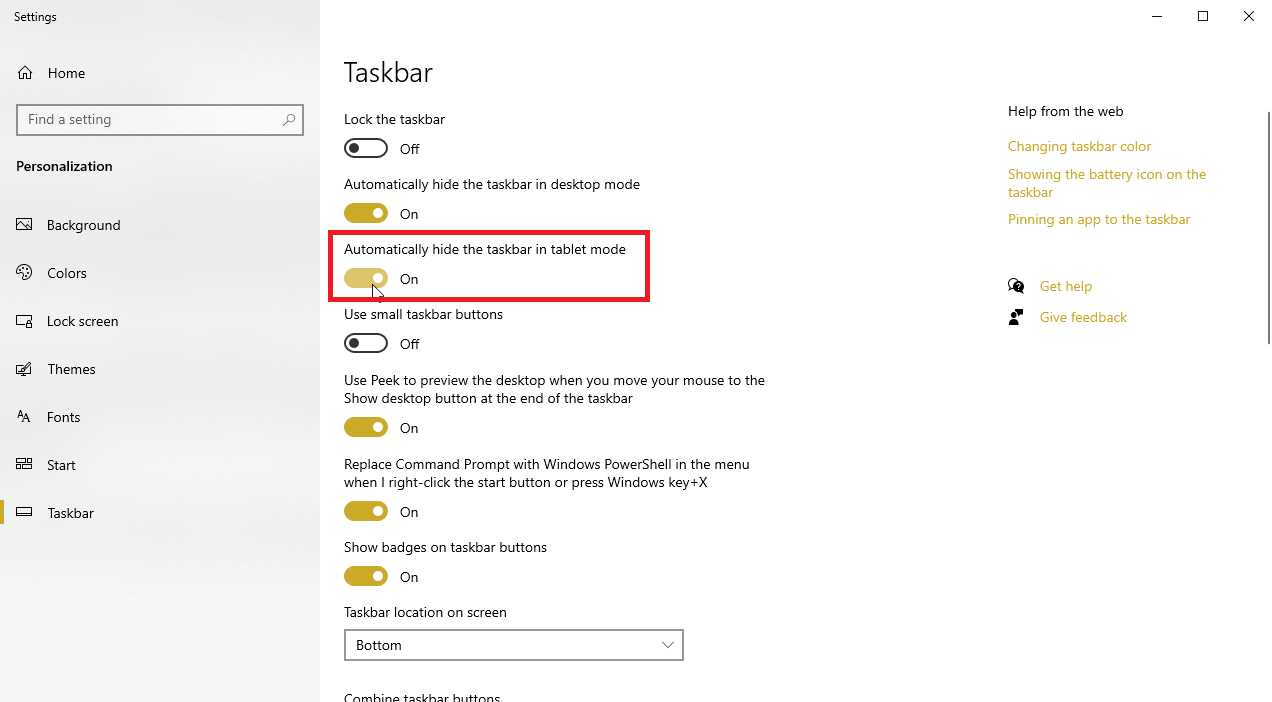 Let’s say you want the Taskbar to remain hidden unless you move your mouse to its location. If you’re using your Windows device in desktop mode, open Taskbar settings and turn on the option that says Automatically hide the Taskbar in desktop mode.

If you’re in tablet mode, turn on the option that says Automatically hide the Taskbar in tablet mode. Your Taskbar will vanish and only reappear when you move your mouse cursor and hover over the location of the bar.

Move Icons on the Taskbar

If you don’t like the placement of the icons on the Taskbar, you can easily move them. Just press down on an icon with your mouse (or finger on a touch-screen device) and drag it to the left or right. Release when the icon is in your new preferred spot. 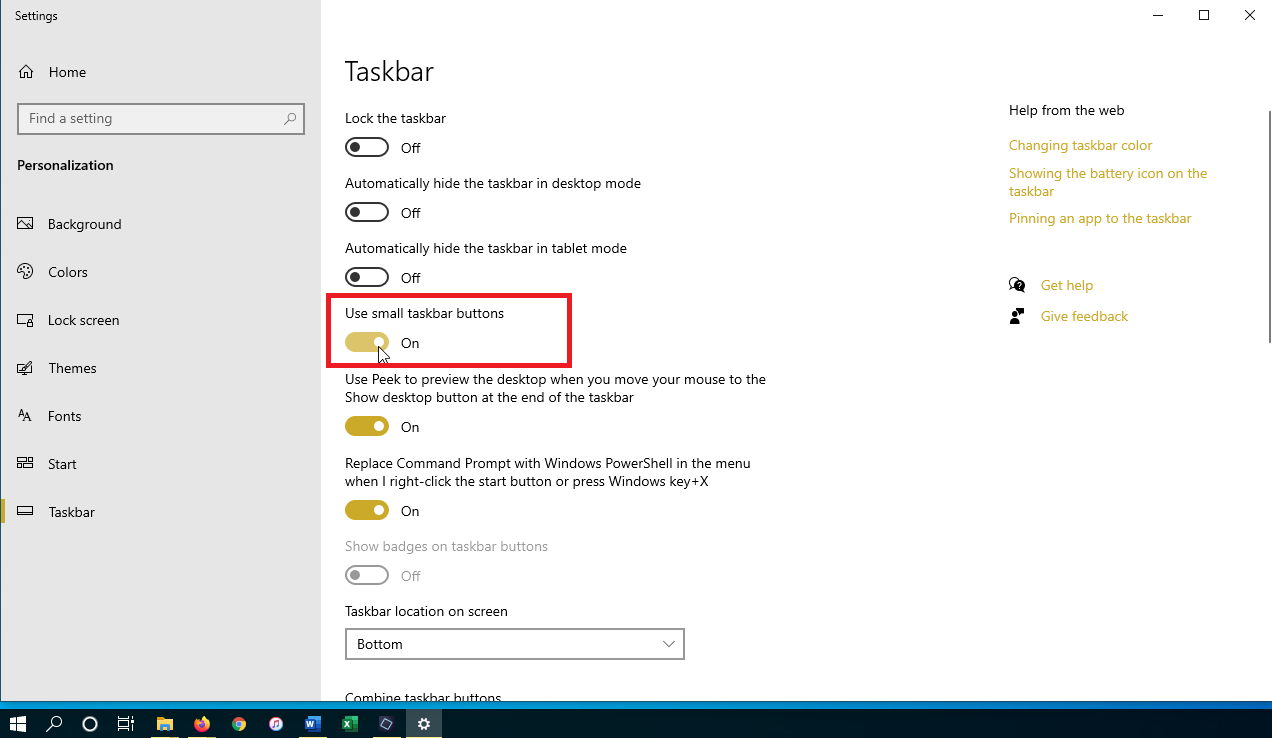 The small section of the Windows Taskbar in the lower-right corner of the screen is known as the Show Desktop button. If you click the button, it offers you a quick way to switch back and forth between the desktop and all open windows.

Peek at the Desktop 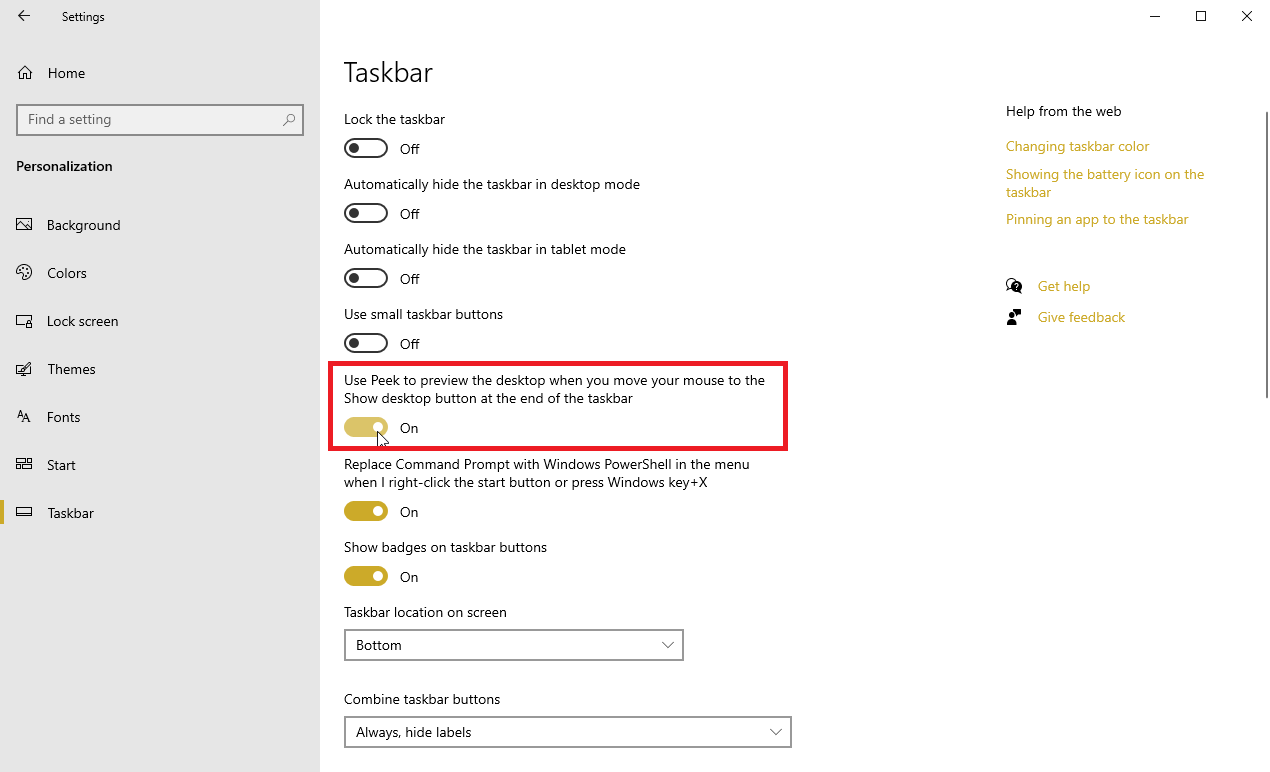 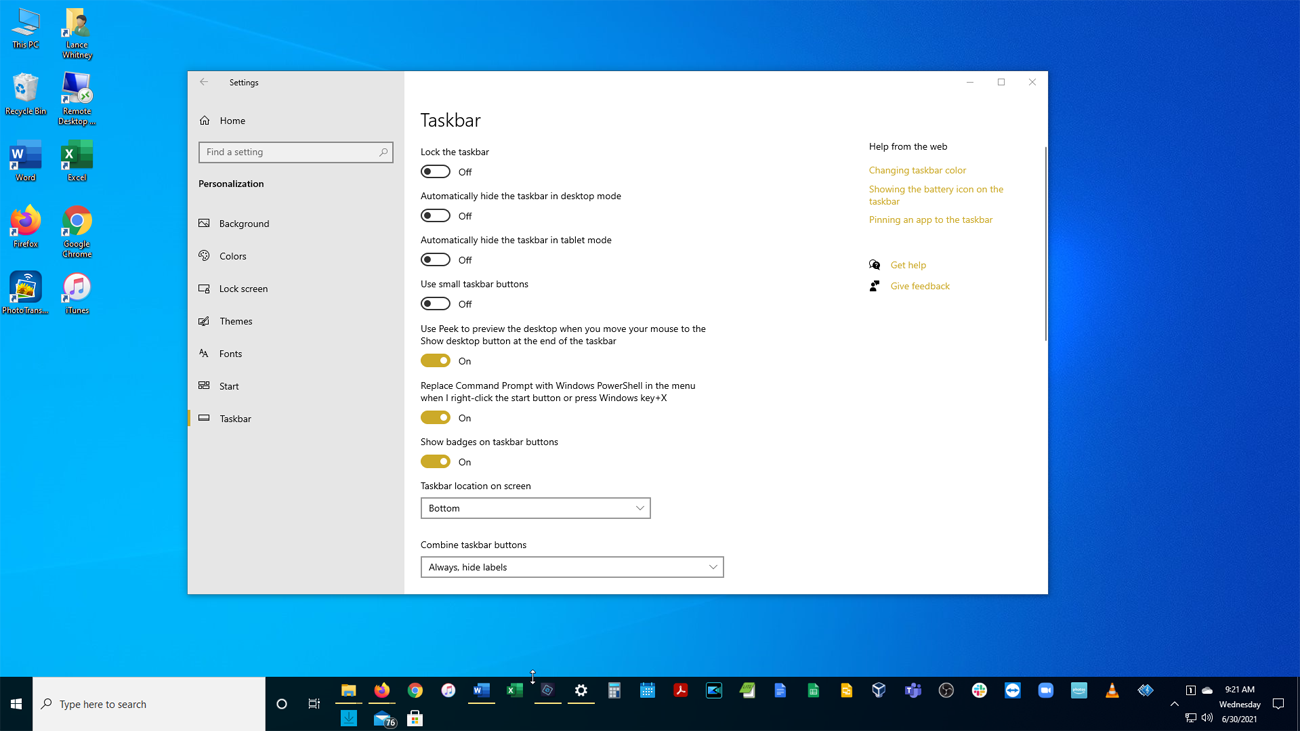 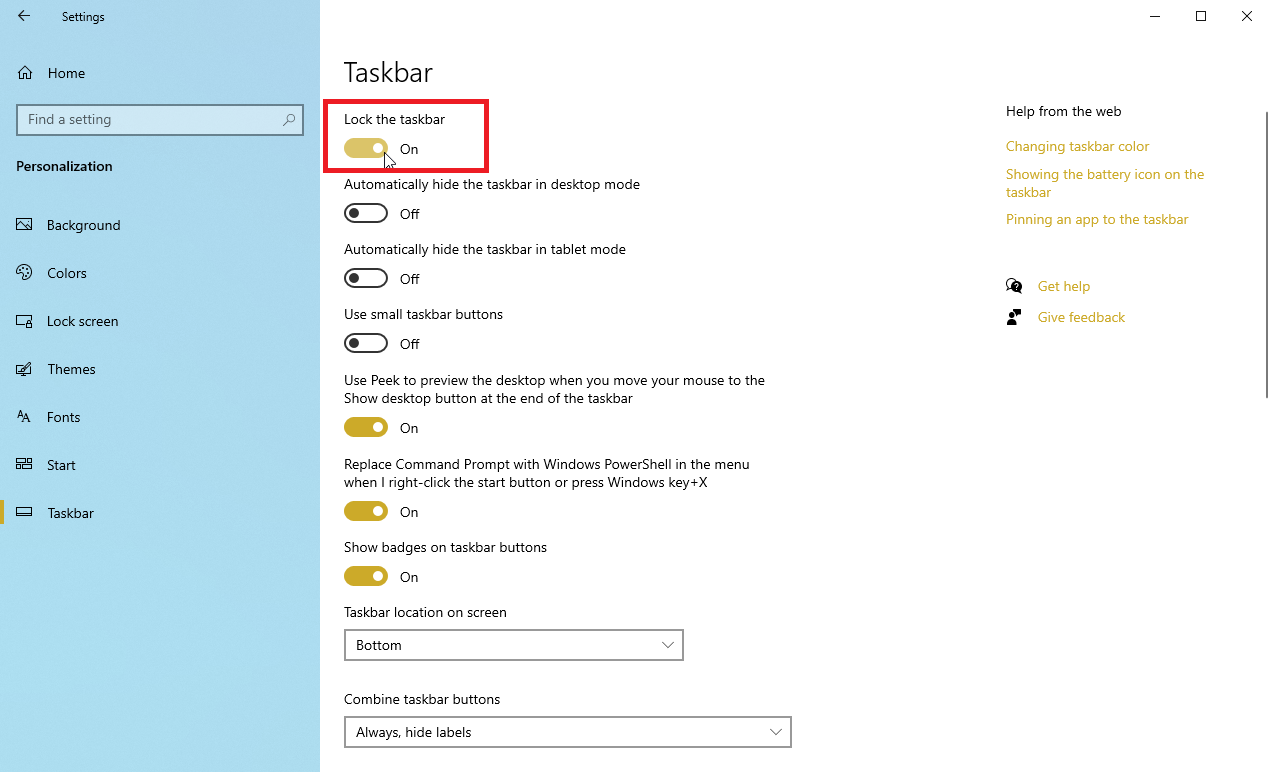 You can also take precautions so you don’t accidentally resize the Taskbar. At the Taskbar settings screen, turn on the Lock the Taskbar option. Now you won’t be able to resize it unless you turn this option off. 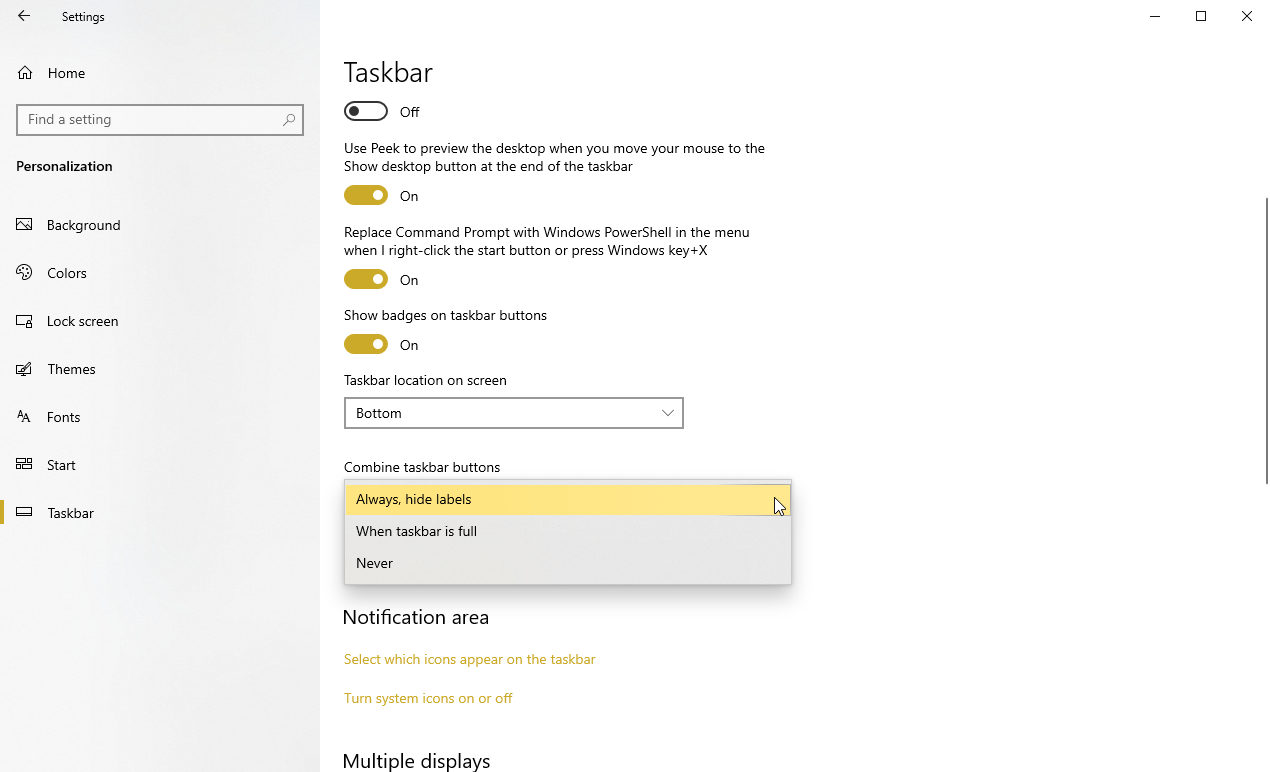 You can declutter the Taskbar under the Taskbar settings page. Open the drop-down menu below Combine Taskbar buttons to choose between three available options. These options determine how your Taskbar handles multiple instances of the same application.

The Always, hide labels option means Windows will always combine multiple open files from a single application, such as File Explorer windows or Word documents, into one Taskbar button. This option also hides the labels or names that would otherwise appear next to each icon. Hover over the button of an application with multiple windows open to see how this option works.

If you prefer to keep these open windows separate, choosing the Never option will make sure multiple open windows are never combined, no matter how full the Taskbar gets.

Shows Badges in the Taskbar 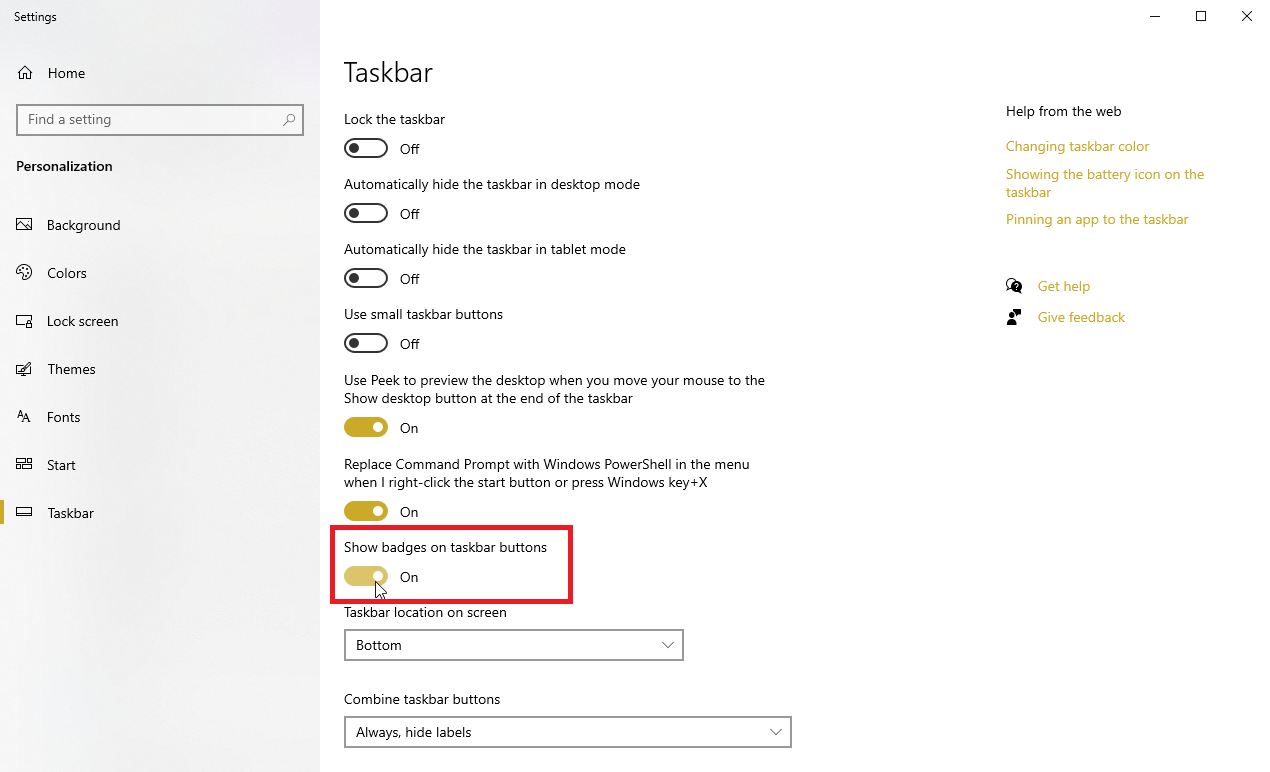 Similar to Live Tiles, badges serve to display notifications for a specific application, such as new messages for Mail or updates for the Weather app. You can control the visibility of these badges from the Taskbar settings screen.

Turn this feature on by activating the switch under Show badges on Taskbar buttons. Icons in the Windows Taskbar will now function as badges. 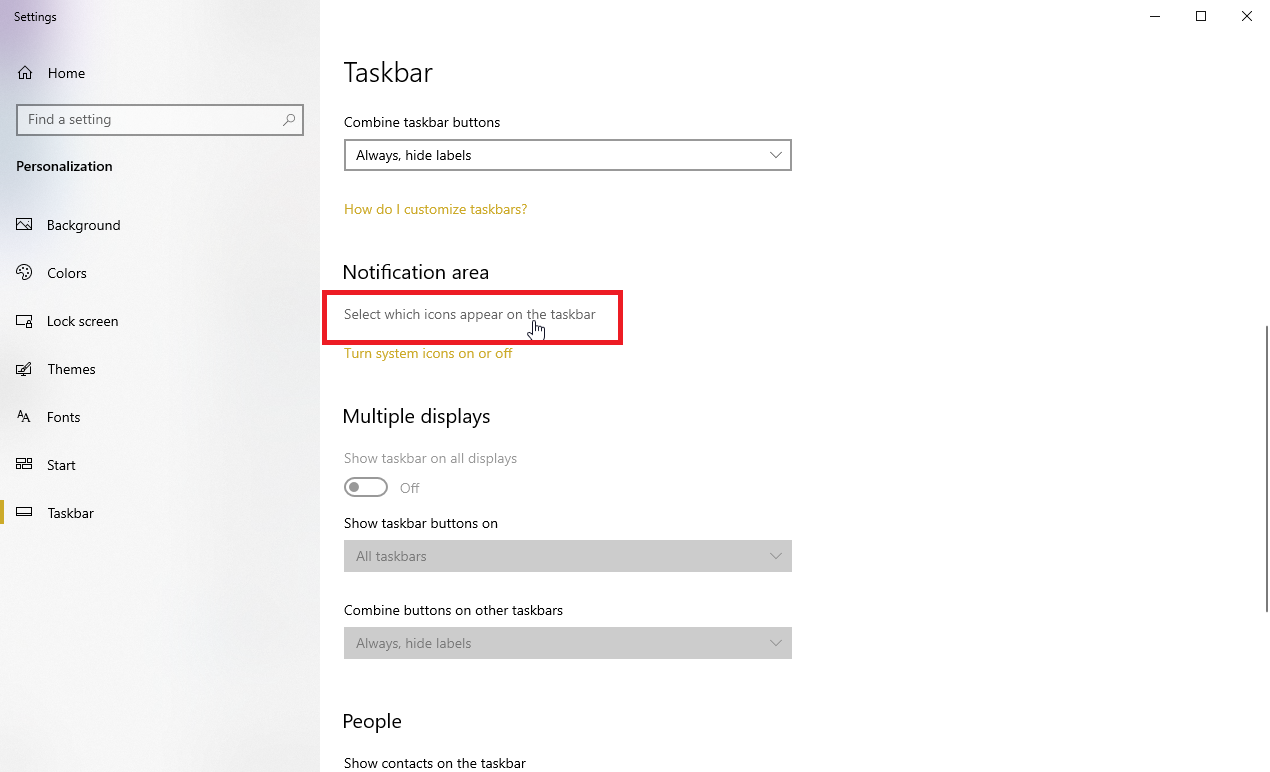 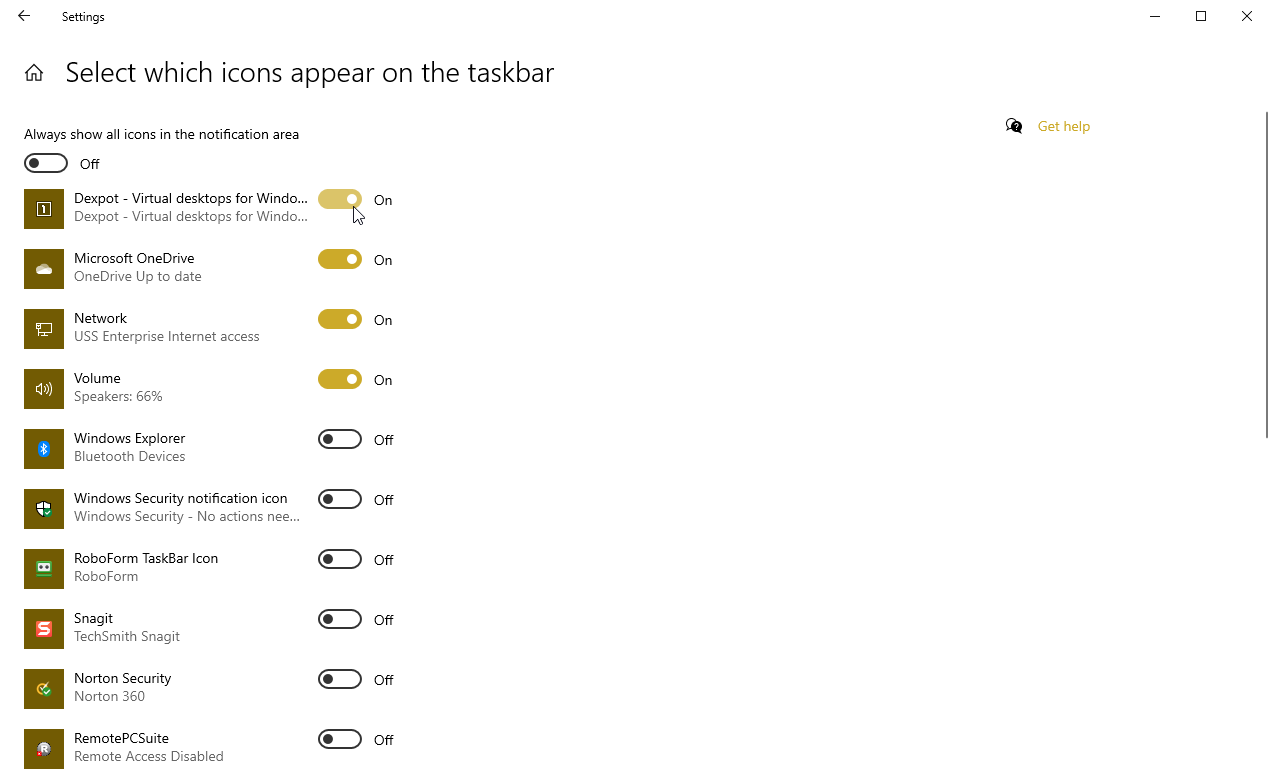 You can then turn on the app icons that you wish to see in the System Tray and turn off the ones you want to stay hidden. If you love having everything at your fingertips, turn everything on. 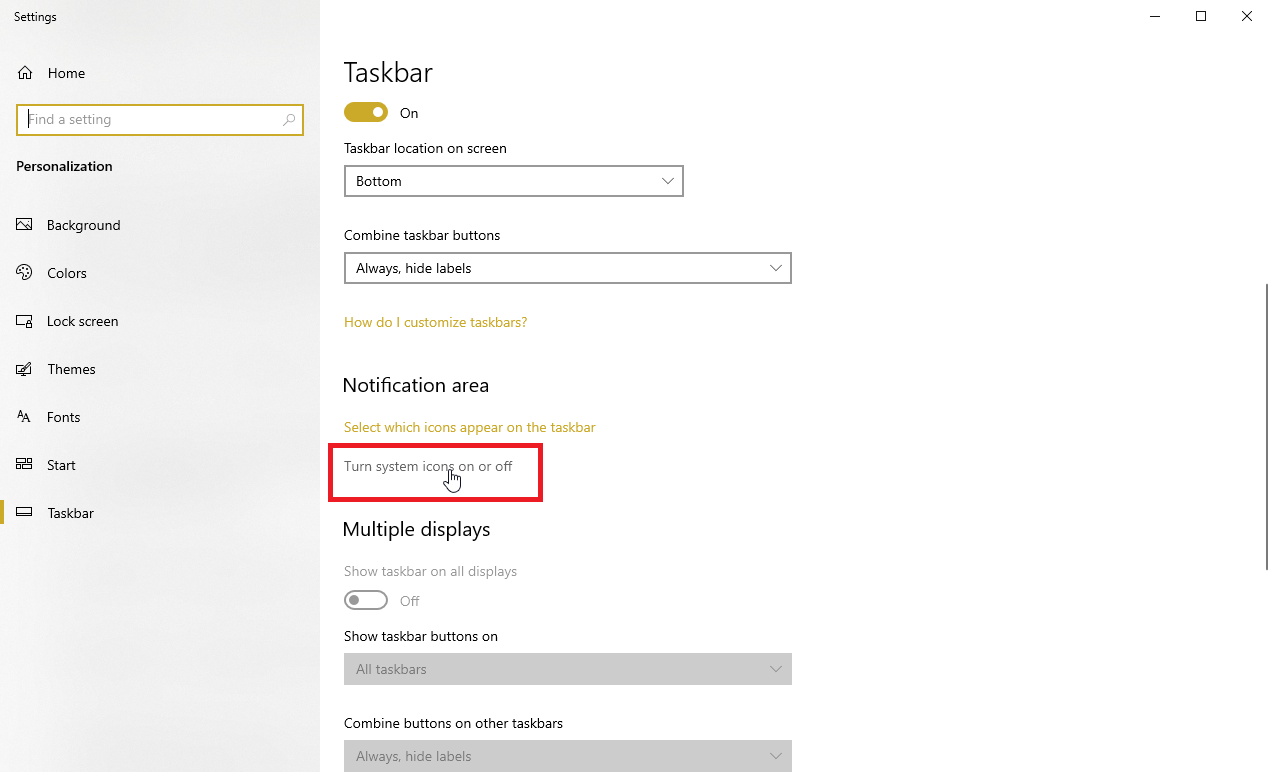 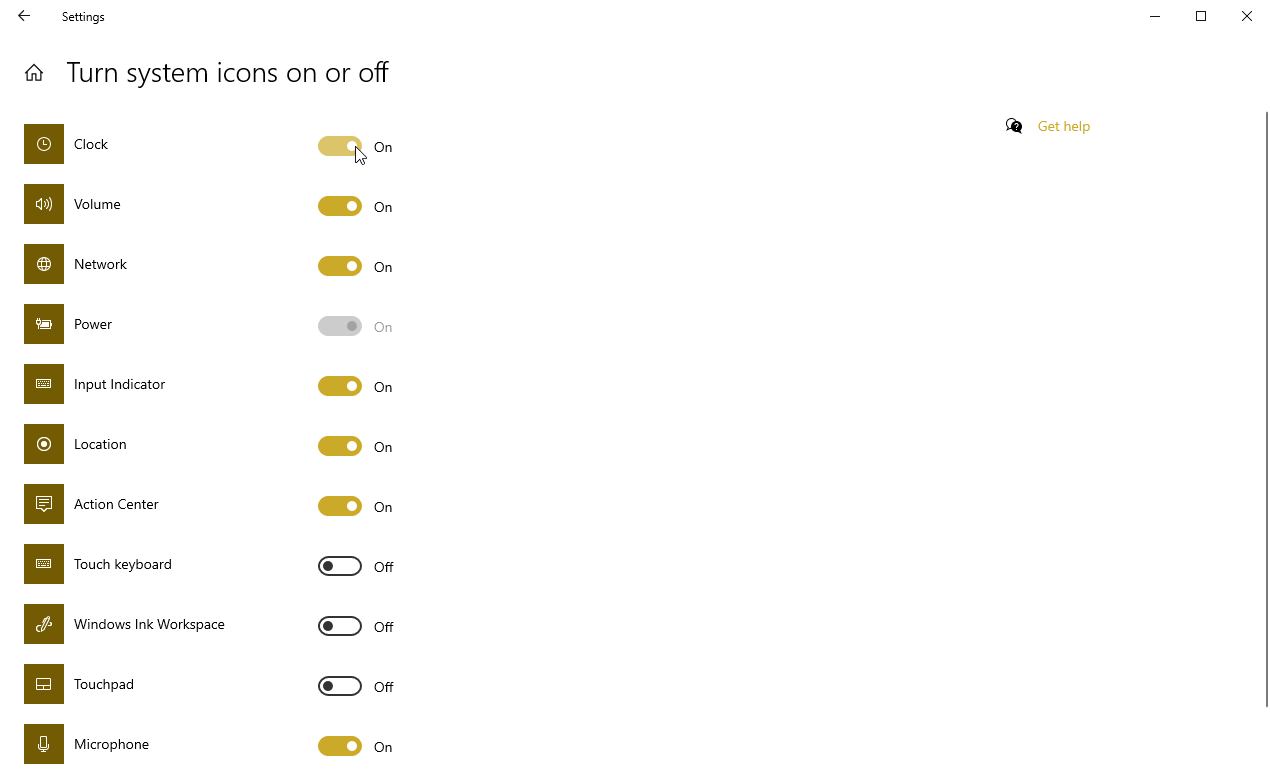 You can then choose which system icons should stay in the System Tray, and which should be turned off. 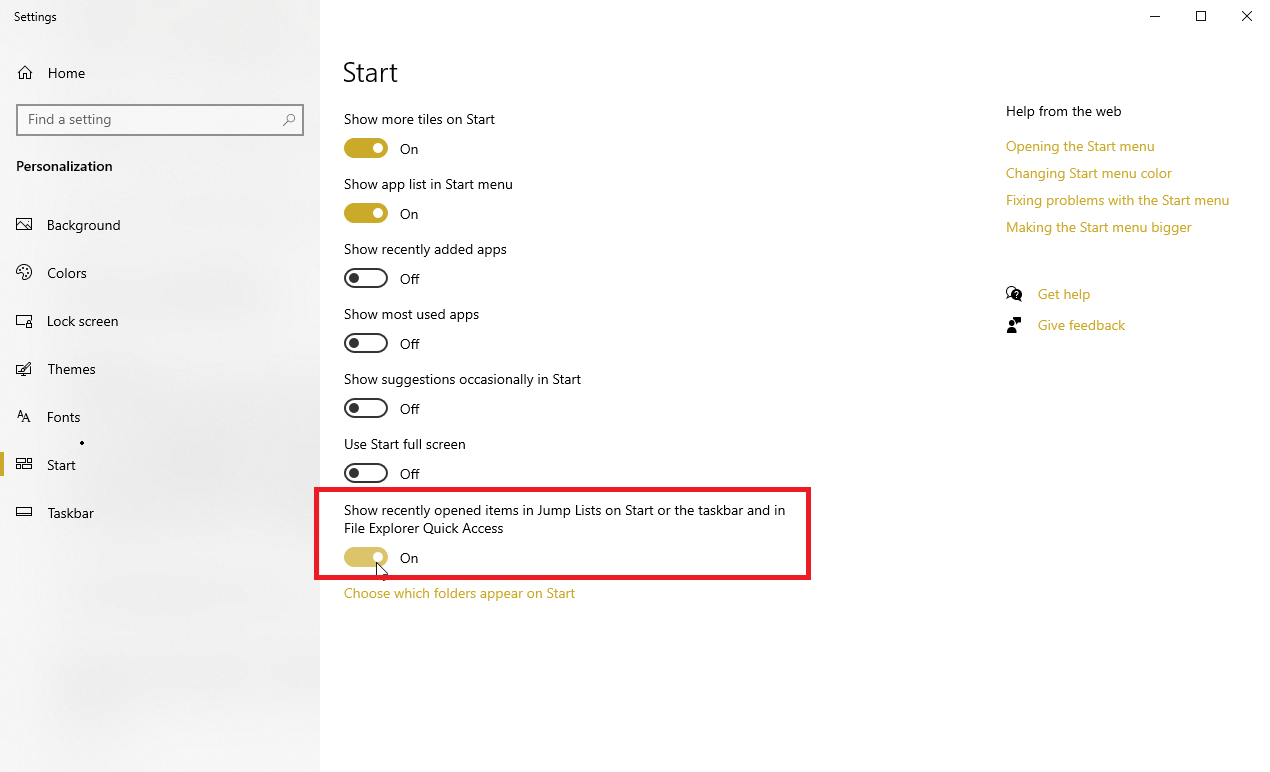 Finally, you can configure the icons on your Taskbar to show Jump Lists. These lists contain links to recent and frequently used files, folders, websites, and other items so you can easily access them. To enable this, go to Settings > Personalization > Start and turn on the switch for Show recently opened item in Jump Lists on Start or the Taskbar and in File Explorer Quick Access.

Now, just right-click on a Taskbar icon to see the Jump List and quickly open a recent or frequently used item.