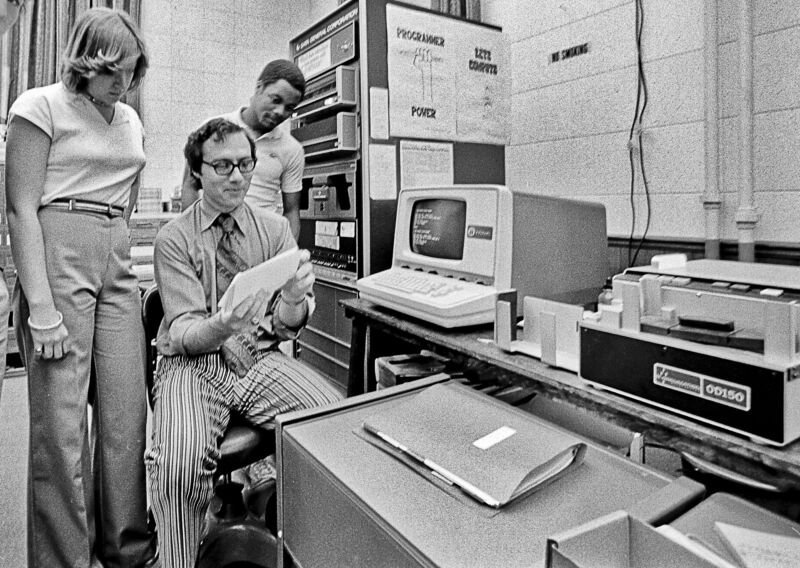 Slashdot reader #16,185 wrote regularly for the newsletter of a small-town computer users group. Now they’ve written an article for Ars Technica reminding readers that “The Homebrew Computer Club where the Apple I got its start is deservedly famous — but it’s far from tech history’s only community gathering centered on CPUs.”

Throughout the 70s and into the 90s, groups around the world helped hapless users figure out their computer systems, learn about technology trends, and discover the latest whiz-bang applications. And these groups didn’t stick to Slacks, email threads, or forums; the meetings often happened in real life. But to my dismay, many young technically-inclined whippersnappers are completely unaware of computer user groups’ existence and their importance in the personal computer’s development. That’s a damned shame… Computer groups celebrated the industry’s fundamental values: a delight in technology’s capabilities, a willingness to share knowledge, and a tacit understanding that we’re all here to help one another…

Two things primarily made user groups disappear: first was the Internet — and the BBSes that preceded them. If you could articulate a question, you could find a website with the answer. But computers also became easier to use. Once personal computers went mainstream, troubleshooting them stopped being an esoteric endeavor.

The typical computer user group is gone now. For the exceptions, you can find an incomplete and mostly out-of-date list via the Association of PC User Groups, though online exploration may lead you to more options. For example, the Toronto PET Users Group (TPUG) is the longest continually operating Commodore user group. Washington Apple Pi is still going strong, as is the Triangle Linux Users Group. IBM’s user group, SHARE, began in the 1950s and continues to support enterprise users, though it’s primarily a conference these days…

Hopefully tech will continue to inspire ways to get together with other people who share your enthusiasm, whether it’s Raspberry Pi meetups, Maker days, or open source conferences such as Drupalcon or PyCon. You also continue the computer user group ethos by finding ways to help other tech enthusiasts locally. For example, Hack Club aims to teach skills to high school students. Hack Clubs are already in two percent of US high schools across 35 states and 17 countries, with about 10,000 students attending clubs and hackathons each year.

So even if computer user groups largely are a thing of the past, their benefits live on. User groups were the precursor to the open source community, based on the values of sharing knowledge and helping one another. And who knows, without user groups promoting a cooperative viewpoint, the open source community might never have taken off like it did.
The article includes photographs of the OS/2 community’s magazine Extended Attributes , the M.A.C.E. Journal (for Atari users), the Commodore Eight Bit Boosters newsletter, and the 1979 publication Prog/80 (“dedicated to the serious programmer.”)

And it also includes video of a 1981 visit to the Boston Computer Society by a 25-year-old Bill Gates.

Reminds me of those old times.

I worked in a room like this one.
Also my first email was from Compuserve 80’s
Fanny, good just to remember.