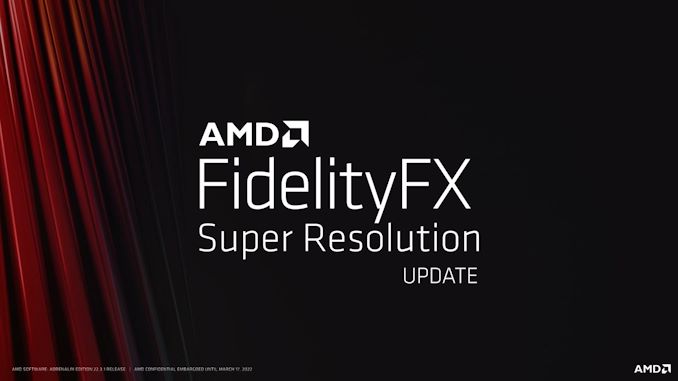 Alongside their spring driver update, AMD this morning is also unveiling the first nugget of information about the next generation of their FidelityFX Super Resolution (FSR) technology. From a report:

Dubbed FSR 2.0, the next generation of AMD’s upscaling technology will be taking the logical leap into adding temporal data, giving FSR more data to work with, and thus improving its ability to generate details. And, while AMD is being coy with details for today’s early teaser, at a high level this technology should put AMD much closer to competing with NVIDIA’s temporal-based DLSS 2.0 upscaling technology, as well as Intel’s forthcoming XeSS upscaling tech.

AMD’s current version of FSR, which is now being referred to as FSR 1.0, was released last summer by the company. Implemented as a compute shader, FSR 1.0 was a (relatively) simple spatial upscaler, which could only use data from the current frame for generating a higher resolution frame. Spatial upscaling’s simplicity is great for compatibility but it’s limited by the data it has access to, allowing for more advanced multi-frame techniques to generate more detailed images. For that reason, AMD has been very careful with their image quality claims for FSR 1.0, treating it more like a supplement to other upscaling methods than a rival to NVIDIA’s class-leading DLSS 2.0.