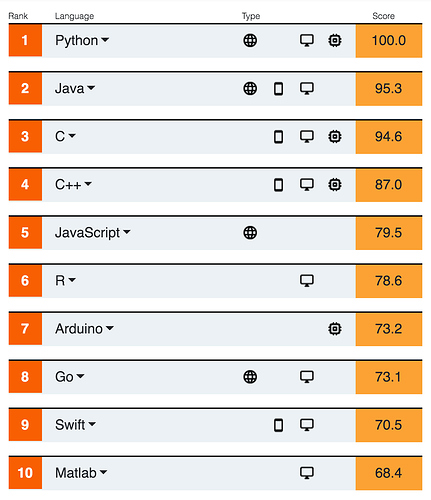 IEEE Spectrum’s August issue will include an article titled “The Top Programming Languages.”

Calculated using metrics from 11 online sources, it concludes that “One thing remains constant: the dominance of Python.” Our default ranking is weighted toward the interests of an IEEE member, and looking at the top entries, we see that Python has held onto its comfortable lead, with Java and C once again coming in second and third place, respectively. Arduino has seen a big jump, rising from 11th place to seventh. (Purists may argue that Arduino is not a language but rather a hardware platform that is programmed using a derivative of Wiring, which itself is derived from C/C++. But we have always taken a very pragmatic approach to our definition of “programming language,” and the reality is that when people are looking to use an Arduino-compatible microcontroller, they typically search for “Arduino code” or buy books about “Arduino programming,” not “Wiring code” or “C programming.”)

One interpretation of Python’s high ranking is that its metrics are inflated by its increasing use as a teaching language: Students are simply asking and searching for the answers to the same elementary questions over and over. There’s an historical parallel here. In the 1980s, BASIC was very visible… But few professional programmers used it, and when the home computer bubble burst, so did BASIC’s, although some advanced descendants like Microsoft Visual Basic are still relatively popular professionally.

There are two counterarguments, though: The first is that students are people, too! If we pay attention only to what professional and expert coders do, we’re at risk of missing an important part of the picture. The second is that, unlike BASIC, Python is frequently used professionally and in high-profile realms, such as machine learning, thanks to its enormous collection of high quality, specialized libraries.
C++ came in fourth, followed by JavaScript, R, “Arduino,” Go, Swift, and Matlab.

But because different programmers have different needs, they’ve also created a special interactive version of their rankings online, "allowing you to weight the metrics as you see fit… "