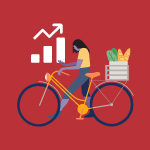 Pinterest statistics are an essential component of marketing strategies both on and off the platform. At a glimpse, they help marketers understand Pinterest audiences and identify trending content.

Social media statistics are widely shared in marketing circles online. But not every stat is relevant, reliable and up to date. We’ve rounded up the Pinterest stats that matter based on the latest data pulled straight from the source.

See how Pinterest stats measure up against other social media networks and beyond.

1. Pinterest is the 14th largest social network in the world

As of January 2021, Pinterest ranks as the 14th largest platform in the world in terms of global active users.

Pinterest’s Q4 2020 Shareholder Report shows that a significant share of the company’s growth took place outside of the United States. International monthly active users rose to 361 million in 2020. That’s a 46% increase from the previous year.

In the United States, 98 million people were active monthly on Pinterest in 2020, representing an 11% increase.

Alongside international user growth, Pinterest gained a significant amount of ad momentum in international markets—“especially in Western Europe,” said the company in a letter to shareholders.

“And we’re just getting started here,” reads the letter. “We plan to expand our presence in existing international markets and are excited to enter new geographies in Latin America in the first half of [2021].”

5. Pinterest’s 10-member board of directors now includes 2 women of color

The company’s most recent diversity report shows that in 2019, Black employees represented only 4% of Pinterest’s overall workforce and only 1% in leadership roles.

Overall, women represented 47% of employees, only 25% of executive positions and a staggering 80% of intern roles.

Pinterest came under fire for gender and race discrimination last year. In June 2020, an independent Special Committee was established to review the company’s workplace culture. The committee’s recommendations were published in December, with some changes already implemented. The company has also made several recent appointments of women of color to its board of directors, executive team and other leadership posts.

Pinterest has pledged to ensure that 50% of the “managed creators” it works with come from underrepresented groups. The company also added a way for retailers, advertisers and creators to self-identify, allowing the company to showcase their content in the Today tab, Shopping Spotlights and The Pinterest Shop.

Use these Pinterest user stats to understand the platform’s demographic dynamics.

6. At 60% women, the gender divide on Pinterest may be narrowing

Women have always outranked men on Pinterest. But in a recent blog post, the company’s global Head of Business Marketing identifies men as one of the platform’s fastest-growing demographics. In 2020, the number of male Pinners increased by nearly 50%.

When it comes to their advertising audience, the gender breakdown looks a little different. As of January 2021, Pinterest’s self-service advertising tools identified the female audience at 77.1%, the male audience at 14.5% and the remainder as unspecified.

In 2019, Pinterest identified a 4,000% increase in searches around gender transitions.

In terms of generational demographics, Pinterest saw the most growth last year with Gen Z. So maybe they’re not spending all their time on TikTok.

According to Pew Research Center, anyone born after 1997 is considered a part of this generation.

Knowing what makes a Pinner pin is often what separates a good marketing strategy from a mediocre one. Whether you’re looking for more followers or sales, these Pinterest stats should guide your efforts.

This figure has declined slightly from 85% last year. Nonetheless, the number of mobile users on the platform has been above 80% since at least 2018.

10. People watch close to one billion videos a day on Pinterest

Not everyone associates Pinterest with video, but it’s been a growing vertical on the platform. To support the growth, the company recently introduced Pinterest Premiere ad packages, which are set up to bolster the targeting and reach of video campaigns.

Why does this matter? It means that Pinners are open to discovering new products and ideas. Almost 9 in 10 people use Pinterest for purchase inspiration, and 98% of people polled by the company say they try new things based on what they find.

12. 85% of Pinners say they use Pinterest to plan new projects

While people use Pinterest in different ways, a significant percentage of Pinners are planners. Often, people come to the platform when they are in the early stages of a project or purchase decision.

Bonus: Download a free guide that teaches you how to make money on Pinterest in six easy steps using the tools you already have.

What kinds of boards were people creating? There was a 95% increase in women’s fashion-themed boards, a 44% lift in beauty and a 36% boost in home decor. Between June and December 2020, Pinterest charted what it describes as a “historical surge” of boards for baby products.

Some new trends also rose to the fore. “Dream lifestyle” boards became three times more prevalent on the platform, along with the rise of at-home workout and project planning.

14. Holiday planning starts as early as 9 months ahead of time

Christmas in July? On Pinterest, Christmas planning starts as early as April.

Searches for “Christmas gift ideas” were three times higher than the previous year in April 2020. “Christmas decor ideas,” “Christmas movies,” “Christmas cookies” and “Christmas wreaths” were among the platform’s top search terms between June and December.

15. 8 in 10 Pinterest users say the platform makes them feel positive

Pinterest has made strides in positivity where other platforms have failed. In fact, in a Morning Consult and Pinterest survey, 90% of people polled went so far as to call Pinterest “an online oasis.” One reason people may feel this way is that the company banned political ads in 2018.

Pinterest also credits content moderation as its means of keeping negativity off the platform. “If social media has taught us one thing, it’s that unfiltered content drives negativity,” reads a company report. “Without intentional moderation, platforms built on connecting people have—in the end—only polarized them.”

Pinterest is a rare frontier on the Internet where people are open to branded content. Learn how other marketers have found success on the app with these Pinterest stats.

16. Advertisers can reach more than 200 million people on Pinterest

Pinterest’s quarter-over-quarter change in advertising reach went up by 6.2% and will likely continue to rise over the year. Part of the increase is the result of Pinterest adding more countries to its ad targeting portfolio.

Still, more than 100,750,000 million members of Pinterest’s ad audience are based in the United States, representing more than 50% of the total audience available to advertisers. The U.S. is followed by Germany, France, U.K. and Canada. This order has not changed since the previous year.

Pinterest reported that “Shopping ad revenue once again grew faster than our overall business and we saw a 6x increase in the number of businesses that used the shopping ads format in Q4 [of 2020].”

This increase corresponded with 85% more engagement across shopping surfaces on Pinterest between April and October 2020.

The shopping ad format is currently only available in 28 countries in North America and Europe. Shopping is among Pinterest’s strategic priorities for 2021, so expect the format to be more widely available soon.

This Pinterest stat suggests that people were not just engaging with shopping, they were checking out too.

Between January and August 2020, there was a 300% increase in add-to-cart and checkout attributed conversions.

Keep in mind, Pinterest recently introduced a variety of features that made it easier to shop on the platform. The stats also correspond with the pandemic-driven shift to online retail.

19. Pinners are 70% more likely to engage with product tags in scenes

This Pinterest stat matters if conversions and sales are a key part of your marketing strategy.

People prefer to see your product in action over straightforward product shots. According to Pinterest, campaigns that show someone using your product are more likely to drive sales, too.

Collection ads allow marketers to promote multiple products in the same Pin. The full-screen ad experience displays a hero image and up to 24 secondary Pins.

According to Pinterest data, people notice when things are “new.” And they remember them more, too. So if you’re launching something new, or new and improved, make sure to include the word.

Pinterest rolled out automatic bidding for shopping in October 2020. By the end of the year, that’s how almost 50% of ad spend on the platform was being funneled.

Pinterest also told investors that the majority of advertisers using automatic bidding increased their budget allocations on the platform, which suggests the process is effective.

23. 92% of Pinterest advertisers rank the platform first for reputation

Pinterest leadership says it pays to be positive. “That positive environment translates to better results for you—because people are more likely to feel positive about, remember and trust brands who show up in positive places,” says Jim Habig, global Head of Business Marketing, in a blog post. (Source: hootsuite)