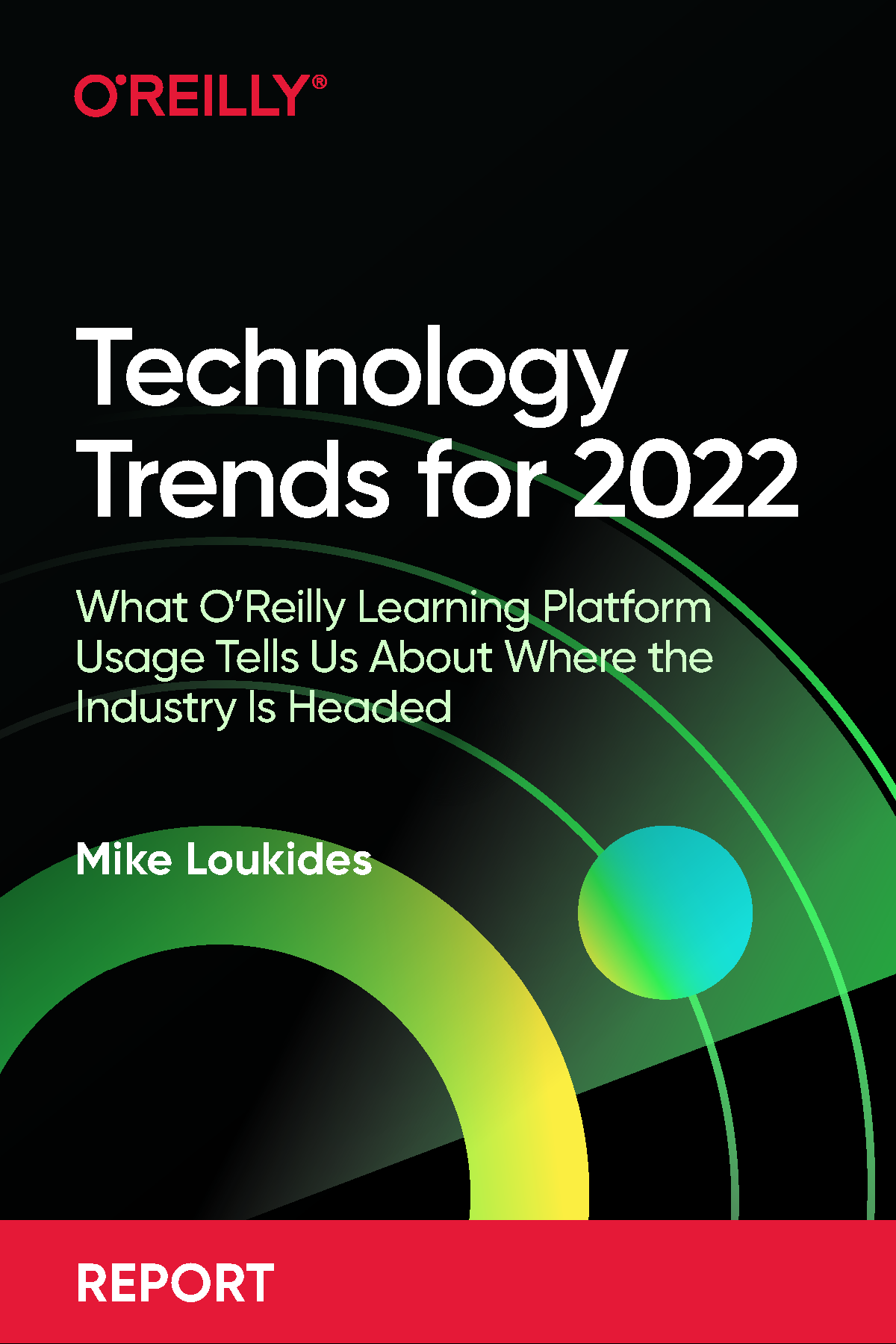 “Focus on the horse race and the flashy news and you’ll miss the real stories,” argues Mike Loukides, the content strategy VP at O’Reilly Media. So instead he shares trends observed on O’Reilly’s learning platform in the first nine months of 2021:

While new technologies may appear on the scene suddenly, the long, slow process of making things that work rarely attracts as much attention. We start with an explosion of fantastic achievements that seem like science fiction — imagine, GPT-3 can write stories! — but that burst of activity is followed by the process of putting that science fiction into production, of turning it into real products that work reliably, consistently, and fairly. AI is making that transition now; we can see it in our data. But what other transitions are in progress…?

Important signals often appear in technologies that have been fairly stable. For example, interest in security, after being steady for a few years, has suddenly jumped up, partly due to some spectacular ransomware attacks. What’s important for us isn’t the newsworthy attacks but the concomitant surge of interest in security practices — in protecting personal and corporate assets against criminal attackers. That surge is belated but healthy… Usage of content about ransomware has almost tripled (270% increase). Content about privacy is up 90%; threat modeling is up 58%; identity is up 50%; application security is up 45%; malware is up 34%; and zero trust is up 23%. Safety of the supply chain isn’t yet appearing as a security topic, but usage of content about supply chain management has seen a healthy 30% increase…

Another important sign is that usage of content about compliance and governance was significantly up (30% and 35%, respectively). This kind of content is frequently a hard sell to a technical audience, but that may be changing… This increase points to a growing sense that the technology industry has gotten a regulatory free ride and that free ride is coming to an end. Whether it’s stockholders, users, or government agencies who demand accountability, enterprises will be held accountable. Our data shows that they’re getting the message.

According to a study by UC Berkeley’s School of Information, cybersecurity salaries have crept slightly ahead of programmer salaries in most states, suggesting increased demand for security professionals. And an increase in demand suggests the need for training materials to prepare people to supply that demand. We saw that play out on our platform…

C++ has grown significantly (13%) in the past year, with usage that is roughly twice C’s. (Usage of content about C is essentially flat, down 3%.) We know that C++ dominates game programming, but we suspect that it’s also coming to dominate embedded systems, which is really just a more formal way to say “internet of things.” We also suspect (but don’t know) that C++ is becoming more widely used to develop microservices. On the other hand, while C has traditionally been the language of tool developers (all of the Unix and Linux utilities are written in C), that role may have moved on to newer languages like Go and Rust. Go and Rust continue to grow. Usage of content about Go is up 23% since last year, and Rust is up 31%. This growth continues a trend that we noticed last year, when Go was up 16% and Rust was up 94%…

Both Rust and Go are here to stay. Rust reflects significantly new ways of thinking about memory management and concurrency. And in addition to providing a clean and relatively simple model for concurrency, Go represents a turn from languages that have become increasingly complex with every new release.
Other highlights from their report: