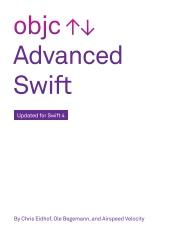 Advanced Swift is quite a bold title for a book, so perhaps we should start with what we
mean by it. When we began writing the first edition of this book, Swift was barely a year old. We did so before the beta of 2.0 was released — albeit tentatively, because we suspected the language would continue to evolve as it entered its second year. Few languages — perhaps no other language — have been adopted so rapidly by so many developers.

But that left people with unanswered questions. How do you write “idiomatic” Swift? Is there a correct way to do certain things? The standard library provided some clues, but even that has changed over time, dropping some conventions and adopting others. Over the past three years, Swift has evolved at a high pace, and it has become clearer what idiomatic Swift is.

To someone coming from another language, Swift can resemble everything you like about your language of choice. Low-level bit twiddling can look very similar to (and can be as performant as) C, but without many of the undefined behavior gotchas. The lightweight trailing closure syntax of map or filter will be familiar to Rubyists. Swift generics are similar to C++ templates, but with type constraints to ensure generic functions are correct at the time of definition rather than at the time of use. The flexibility of higher-order functions and operator overloading means you can write code that’s similar in style to Haskell or F#. And the @objc and dynamic keywords allow you to use selectors and runtime dynamism in ways you would in Objective-C.

Given these resemblances, it’s tempting to adopt the idioms of other languages. Case in point: Objective-C example projects can almost be mechanically ported to Swift. The same is true for Java or C# design patterns. And monad tutorials appeared to be everyone’s favorite blog post topic in the first few months after Swift’s introduction.

Who Is This Book For?

This book targets experienced (though not necessarily expert) programmers — such as existing Apple-platform developers, or those coming from other languages such as Java or C++ — who want to bring their knowledge of Swift to the same level as that of Objective-C or some other language. It’s also suitable for new programmers who started on Swift, have grown familiar with the basics, and are looking to take things to the next level.

The book isn’t meant to be an introduction to Swift; it assumes you’re familiar with the syntax and structure of the language. If you want some good, compact coverage of the basics of Swift, the best source is the official Apple Swift book (available on iBooks or on Apple’s website). If you’re already a confident programmer, you could try reading our book and the Apple Swift book in parallel.

This is also not a book about programming for macOS or iOS devices. Of course, since Swift is currently mainly used on Apple platforms, we’ve tried to include examples of practical use, but we hope this book will be useful for non-Apple-platform programmers as well. The vast majority of the examples in the book should run unchanged on other operating systems. The ones that don’t are either fundamentally tied to Apple’s platforms (because they use iOS frameworks or rely on the Objective-C runtime) or only
require minimal changes, such as replacing the BSD-specific function we use to generate random numbers with a Linux equivalent.