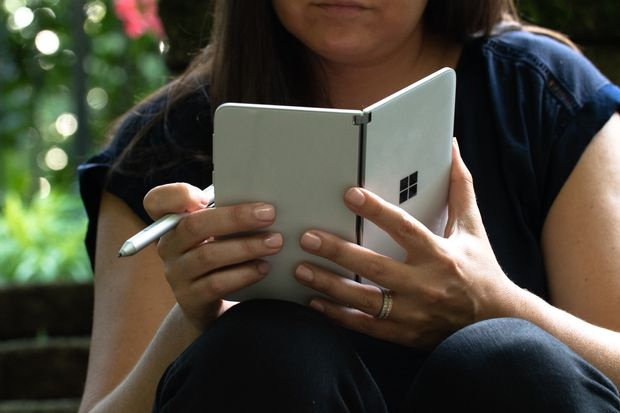 It isn’t always clear when something is ready. Take my grilling. Sometimes I remove steak well before or after I should’ve. You might say it’s a “tough” call. But there’s nothing tough about stating this: The new two-screen Surface Duo is undercooked. Microsoft’s new $1,400 book-like phone-tablet thingy is not ready for me and not ready for you. Unless, of course, you want an Android device that repeatedly ignores your taps on its screens, randomly slows down, struggles to figure out its own up, down and sideways positioning, and abruptly rearranges parts of its own interface. If that is your dream, well, then it is ready. Somehow, Microsoft disagrees. “We had been testing for some time. We wanted to get it out. We thought this was the right time for us,” said Matt Barlow, Microsoft’s corporate vice president of modern life, search and devices.

With OneNote, I’ve loved brainstorming and taking notes with the $100 Surface Pen (sold separately). I’d love it even more if the pen could keep up with my writing. Another performance issue. Unfortunately, key Microsoft apps like Excel and Skype haven’t been optimized for two screens. Microsoft and Google are also working with third-party app developers. The Kindle app, for instance, places a page on each screen to make this one adorable little e-reader. (Or at least it should. It glitched midway through testing, but began working again later, after I complained to Microsoft.) You can also launch one app on each screen – Edge browser on left, Word on right, for instance. One of my favorite features is App Groups, which lets you pair two apps together to simultaneously launch. I have Twitter and TikTok in one with the label, “Bad for My Brain.” One screen is still better suited to many of our current needs, and that makes this wide device feel awkward more often than not.