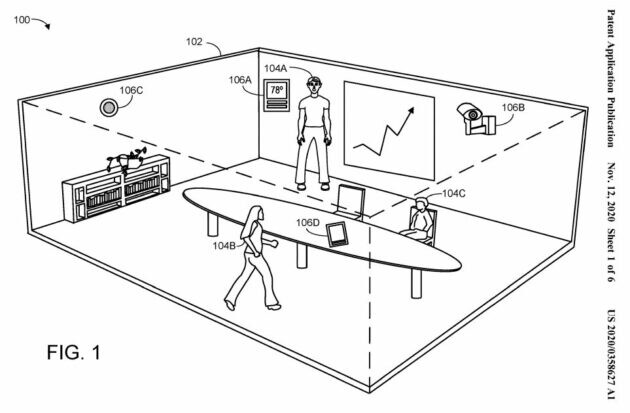 The Microsoft 365 Productivity Score apparently has roots in another Microsoft patent application for Systems, Methods, and Software for Implementing a Behavior Change Management Program, which also lays out plans for as yet unimplemented features to automatically schedule hundreds of employees for months of productivity re-education, including preventing employees from scheduling meetings with others if the service deems it counter-productive. So, could the HAL 9000’s “I’m sorry Dave, I’m afraid I can’t do that” be considered prior art?
But Microsoft “has even bigger ideas for using technology to monitor workers in the interest of maximizing organizational productivity,” reports GeekWire:Newly surfaced Microsoft patent filings describe a system for deriving and predicting “overall quality scores” for meetings using data such as body language, facial expressions, room temperature, time of day, and number of people in the meeting. The system uses cameras, sensors, and software tools to determine, for example, “how much a participant contributes to a meeting vs performing other tasks (e.g., texting, checking email, browsing the Internet).”

The “meeting insight computing system” would then predict the likelihood that a group will hold a high-quality meeting. It would flag potential challenges when an organizer is setting the meeting up, and recommend alternative venues, times, or people to include in the meeting, for example… A patent application made public Nov. 12 notes, “many organizations are plagued by overly long, poorly attended, and recurring meetings that could be modified and/or avoided if more information regarding meeting quality was available.” The approach would apply to in-person and virtual meetings, and hybrids of the two…

The filings do not detail any potential privacy safeguards. A Microsoft spokesperson declined to comment on the patent filings in response to GeekWire’s inquiry. To be sure, patents are not products, and there’s no sign yet that Microsoft plans to roll out this hypothetical system. Microsoft has established an internal artificial intelligence ethics office and a companywide committee to ensure that its AI products live by its principles of responsible AI, including transparency and privacy. However, the filings are a window into the ideas floating around inside Microsoft, and they’re consistent with the direction the company is already heading.