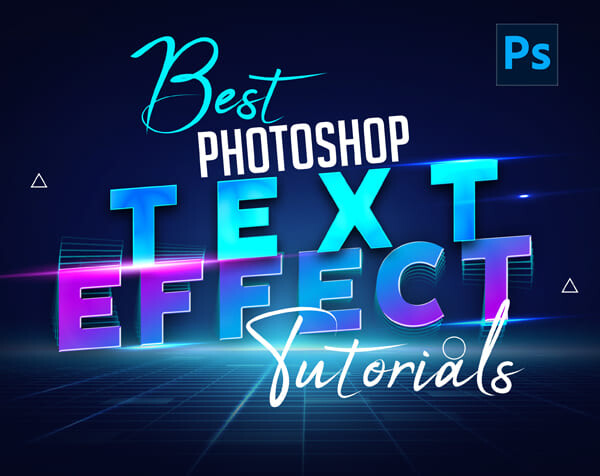 This post aims to give you a comprehensive collection of the best Photoshop text effect tutorials. Take a look at the full list after the jump.

The most popular ones

Cool looking grass-text effect using a photo of grass, the pen tool and a bit of patience.

Realistic text made from water drops.

Take typography one step further by having text falling from the sky in a burning inferno.

How to use a photograph of fire to set text to the match.

Creating a smoky night effect on text to give it an eerie supernatural sort of feel.

How to add the wow factor to 3D text using Photoshop’s art tools.

How to create a nice StarCraft style wallpaper.

Here we will create a style named ‘Scanline Text’ which is basically text which glows like bright scanlines, with a smart reflection as well.

How to mix some vectors with letters to create a really nice design.

Make an awesome wood emboss effect, put bullet holes into the wood, and finally smoke ’em up to a gnarly Wyatt-Earp-just-walked-past look.

Destructive Black and White Lettering with a Dramatic Splash Effect

How to Create a Glowing Metal Text Effect in Adobe Photoshop

This tutorial will show you how to use the duplicate with transformation technique to create a piece of 3D text, and then use a bunch of different layer styles to achieve a glowing metal text effect.

This tutorial will show you how to use a dotted font, with a couple of layer styles, to achieve a simple, glittering diamonds text effect.

In this tutorial, I will show you the steps I took to create this Mysterious “Energy Flow” rock text effect in Photoshop. We will use a rock texture, river flow stock image, and cloud brushes to achieve this effect. The rock texture will form the foundation of the text, whereas the river stock will be used to create the “Energy Flow” around the text.

How to Create an Epic Metal Text Effect From Scratch

Learn how to make epic text effect, by simple steps. You will learn, how to make beautiful background to your typography by brushes and stock images. This tutorial will teach you, how to play with layer styles in awesome way.

In this tutorial you will found that adding an extra step to this known technique, enables you add transparent gradients to text in Illustrator CS4 while still keeping the text editable!

How to Create a Pencil Pattern Brush in Adobe Illustrator

This Stitched Letter Vector Effect tutorial. Like the previous tutorials, this one relies heavily on the Appearance panel, making it easy to edit the text and apply the treatment to other fonts and vector elements.

Take your text art for a spin with this split 3D split text vector effect. Add dimension to your work in as quick as 20 minutes with this tutorial!

How to Create a Quick Sketch Text Effect in Adobe Photoshop

This tutorial will show you how to use smart objects, layer styles, and some filters to create a simple sketch text effect. I’ll also give you a cool tip for changing the coloring of the final result pretty easily using a Photo Filter adjustment layer.

In this tutorial, I will show you the process of creating this 3D star light text effect in Photoshop. We will use a number of manipulation techniques such as layer blending, adjustment layers and various tools such as brush, eraser and free transform tools.

This tutorial will show you how to use layer styles, smart objects, and some other basic elements in Adobe Photoshop to create a simple, retro looking, 3D text effect.

How to Create Letterpress Text Effects in Photoshop

This tutorial will teach you how to create a couple useful letterpress text effects in Photoshop that you can adapt and reuse in almost any project.

In this Photoshop tutorial, we’re going to see how to create extremely glossy and shiny text effect with glitter texture.

This tutorial by TexTuts will show you a super easy way to create a glossy candy cane inspired text effect using a bunch of Layer Styles.

This tutorial is designed to help you create cool neon text in Illustrator. Here you will learn some clever techniques to enhance your skills.

This is a tutorial based on how to create a realistic baseball inspired text effects with stitches around the corner in Photoshop, made from scratch.

This tutorial shows how to create superb RAWZ light effect text style with carbon fiber background in Photoshop from scratch.

This tutorial illustrates a wonderful and realistic broken plates text effect in Photoshop from just a blank Photoshop document.

This tutorial is based on creating a marvelous rainbow text effect with different effects in Photoshop from scratch.

This is a tutorial which focuses on creating an awesome steam-powered text effect in Photoshop from scratch.

Using Light and Shade to Bring Text to Life

Thanks for these awesome MASSIVE lists!

Thanks for taking the time

Simply amazing! Thanks for your hard work!