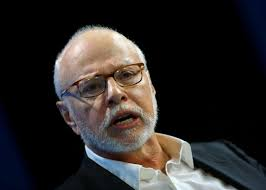 Jack Dorsey co-founded Twitter in 2006, coding up the first prototype (with the help of a contractor) when he was still in his 20s. Dorsey’s now it’s CEO – but “A major Republican donor has purchased a stake in Twitter and is reportedly seeking to oust him,” reports the Guardian.

Bloomberg News first reported that Elliott Management has taken a “sizable stake” and “and plans to push for changes at the social media company, including replacing Dorsey”. Paul Singer, the billionaire founder of Elliott Management, is a Republican mega-donor who opposed Donald Trump during the real-estate magnate’s run for the presidential nomination but has since come onside…

Elliott Management is an activist investor, which means it regularly pushes for change in companies in which it buys shares.
Gizmodo referred to them as “hedge fund goons”. But Reuters adds that Twitter "is one of the few U.S. technology companies headed, but not controlled, by one of its founders.

“It has given shareholders equal voting rights, making Dorsey, who owns only about 2% of the company, vulnerable to a challenge from an activist investor…”