How To Install Metasploit Framework In Termux Application

Metasploit Framework maybe a known creation and as you’ll say its a package platform for developing, testing, and executing exploits. It has the ability to produce security testing tools and exploit modules and additionally as a penetration testing system. But today, I’m progressing to install this Metasploit Framework in Android phone with the assistance of Termux application in a simple manner.

Before running the Metasploit Framework firstly you have to install the Termux Application from Google Play Store.

After that open the Termux Application and type the below commands step wise step.

apt-get install git: Like you guys, know GIT is a free and open-source distributed version system designed to handle everything from little to terribly giant comes with speed and potency.

apt-get install python2 : This command is run to put in the Python2 in Termux App.

apt install curl : This command can facilitate to transfer the information from a server using one of the supported protocols like FTP, FTPS, GOPHER, HTTP, HTTPS etc

Type the below command to download the shell file of Metasploit.

ls : It’s use for seeing the files in the current directory.

bash Metasploit.sh : To understands and executes the commands when a user enters. In some systems, the shell is additionally referred to as a command interpreter.

msfconsole :This command is used to access the Metasploit Framework. 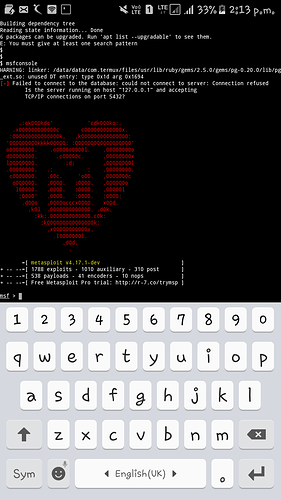 when you type msfconsole command and after few moments the heart-shaped Metasploit logo comes.It changes automatically whenever you login.

Why msfconsole is not working

I've msfconsole installed and is listing in the bin directory, but when I type command, msfconsole , it says not found, and meanwhile... 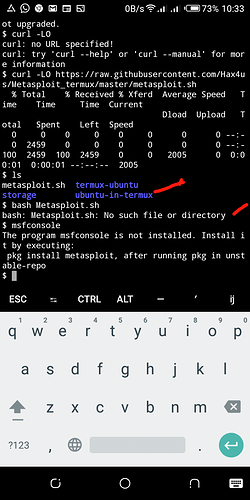