GitHub Warns Users Reposting YouTube-DL They Could Be Banned 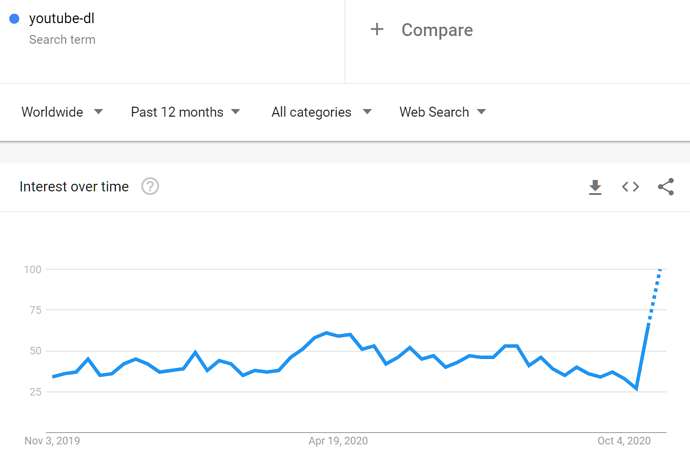 An anonymous reader quotes a report from TorrentFreak:

On October 23, 2020, the RIAA decided on action to stunt the growth and potentially the entire future of popular YouTube-ripping tool YouTube-DL. The music industry group filed a copyright complaint with code repository Github, demanding that the project be taken down for breaching the anti-circumvention provisions of the DMCA. While this was never likely to be well received by the hoards of people who support the software, the response was unprecedented. […] One of the responses was to repost the content to Github itself, where hundreds of YouTube-DL forks kept the flame alight. A copy even appeared in Github’s DMCA notice repository where surprisingly it remains to this day. Now, however, Github is warning of consequences for those who continue to use the platform for deliberate breaches of the DMCA.

As previously reported, Github is being unusually sympathetic to the plight of the YouTube-DL developers. Most platforms are very happy to simply follow the rules by removing content in response to a DMCA complaint and standing back while declaring “Nothing to do with us folks.” Github, on the other hand, has actively become involved to try and get the project reinstated. Unfortunately, however, there is only so far Github can go, something the company made clear in a statement posted to its DMCA repository this weekend.

“If you are looking to file or dispute a takedown notice by posting to this repository, please STOP because we do not accept Pull Requests or other contributions to this repository,” wrote Jesse Geraci, Github’s Corporate Counsel. “Please note that re-posting the exact same content that was the subject of a takedown notice without following the proper process is a violation of GitHub’s DMCA Policy and Terms of Service. If you commit or post content to this repository that violates our Terms of Service, we will delete that content and may suspend access to your account as well,” Geraci wrote. This statement caused an update to Github’s earlier DMCA notice advice.

Soooooo… we just need to change the code slightly and it’s ok?

Someone should upload YouTube-DL on git repo over IPFS, that would make it available for lifetime. I found some docs regarded this: https://docs.ipfs.io/how-to/host-git-style-repo/

You can found the Repo at the GitLab