Hello guys, ive been using “Ccleaner” for years but i have been reading that its not good for windows 10 and also it has a bad rep since avast bought it.

Do you think its a most to have CCleaner? or it is better to get rid of this 3rd party software and stick with the tools windows 10 have.

Personally i have been using this software for years, but i must agree i have to edit a lot of settings. That affect my privacy:

I hope you can give me a feedback of this software.

Get rid of it

Thank you and have a nice day.

Umm… It’s not that kinda unsafe, but yea!

CCleaner, once a tidy app with no history of issues, has had several major problems in less than a year. This is unfortunately not surprising after Avast purchased CCleaner developer Piriform in July 2017.

The latest CCleaner controversy comes from ignoring user preferences about checking for updates. A user on Piriform’s forums noticed that CCleaner had automatically updated on his system without his permission. As it turned out, that’s exactly what happened.

A Piriform staff member responded with the following:

“Since the release of v5.46 we have updated some users to this version to meet legal requirements and give users more autonomy and transparency over their privacy settings.”

It’s a bit ironic to claim that going into a user’s system without their permission and making changes is a move based on privacy and transparency. This is especially the case when that latest version of CCleaner has data collection options enabled by default (see the section below).

Check out the below video to see the forced update happen when installing an old version of CCleaner:

CCleaner Forcing Updates to 5.46 Even if Automatic Updates are disabled

If a user says they don’t want to get automatic software updates, the app should respect this. 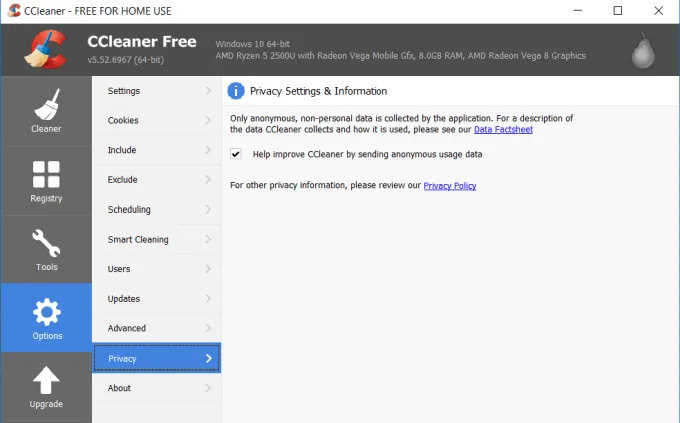 CCleaner’s biggest recent controversy came in version 5.45. This included a feature called “Active Monitoring,” a fairly standard feature that collects anonymized information about your system. You could disable it to turn the feature off—or could you? 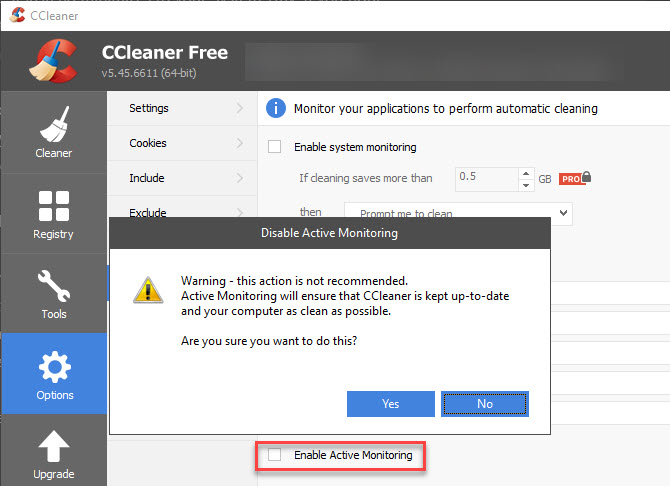 As it turns out, if you disabled Active Monitoring in CCleaner, the software automatically re-enabled it after you rebooted or reopened CCleaner . This is extremely suspicious behavior. Though Piriform has backpedaled on it by pulling version 5.45 from the main download page for a time, upset users fled in droves.

Additionally, that version of CCleaner was much harder to quit. When you clicked the X to close the software, it instead minimized to your System Tray. If you right-clicked its icon, there was no option to exit CCleaner. This means you had to close it using the Task Manager, which novice users might not know how to do.

Thus, CCleaner now ran constantly in the background, collecting data for Avast. This is despite most people only opening CCleaner when needed, and requesting to not have this information collected.

Prior to this, Piriform discovered that CCleaner was hacked and distributed malware. The 32-bit version was infected with a Trojan that collected information about systems it was installed on. It also had the capability to run code on affected systems.

Thankfully, the company caught it before a widespread attack could happen. But it’s pretty embarrassing that a top-tier security company like Avast had such an embarrassing slip-up.

Unfortunately, in 2017 hackers successfully injected malware into the CCleaner app to distribute itself across millions of users who had CCleaner installed.

Since its acquisition by Avast, CCleaner also shows pop-ups harassing you to upgrade to the paid version (which has an automatic cleaning feature). And installing CCleaner sometimes shows an offer to install Avast, which you must uncheck to avoid.

With all this combined, enough is enough. If you’ve had your fill of this obnoxious and shady behavior, it’s time to say goodbye to CCleaner.

What to Replace CCleaner With

The good news is that you actually don’t need CCleaner—Windows 10 has most of its functionality built-in, check out this guide to cleaning Windows 10. And you can install other tools for the rest.

Do you think its a most to have CCleaner? or it is better to get rid of this 3rd party software and stick with the tools windows 10 have.

what is the point of these cleaners? What do they actually achieve?

For years I used CCleaner believing it would give me a faster, smoother junk free experience. I even tried a few others such as BleachBit.

But after the “problems” started with CCleaner and the whole Avast issue I got rid of it.

Since then I use the available Windows tools, either Storage Sense or Disk Cleanup.

Have I seen any quantifiable difference? Not really.

The only time I can say that I gained free space was when old system restore points were removed or old Windows Update files.

But other than that, I think it is mostly a mindset. People think these cleaners are clearing junk but in fact it is only an illusion of sorts.

Just my opinion on the matter since I cannot provide any quantifiable statistics to prove the argument one way or another.

In any event, registry cleaning is not advisable and the minimal space gained can also be done by turning on Storage Sense.

Hello guys, ive been using “Ccleaner” for years but i have been reading that its not good for windows 10 and also it has a bad rep since avast bought it.

I completely agree with @Mr.Brilliant

There has been Many Problems Like yours from Members that have used these registry cleaners posted on this board. (IMO) I do NOT recommend you use Any of these cleaners. Windows 10 does a excellent job of taking care of itself.

But, still If you wish, you can grab an older version:
Download Old Versions of CCleaner for Windows - OldVersion.com

and simply not update it.

I don’t use it because make my computer run faster or anything like that. But I use it because it makes cleaning HDD easy.
I find both disk analyzer and disk cleaner tool in CCleaner to be convenient and very informative. Unlike Windows built-in disk cleaner it gives you more control in deciding what you want to clean. I have about 5 browsers on my pc. I sometimes am oke with removing the the temp files from one browser but not the other 4. Windows disk cleanup doesn’t give you that power. I know I could go in each browser and clean the history but CCleaner makes it so easy just one app to finely choose what you want to clean of both the programs on you pc and the system files itself.

So yeah despite the problems I still use CCleaner from time to time but as a portable app. I never installed it on my system.