Here I am introducing the most known and powerful CMD Command Prompts that every Noob or expert should know, to make your task easier that everyone does on a regular basis. Probably, a few of commands expertise already know, but let noobs take maximum advantage they can to become a pro, kindly proceed and start reading, Note: this list collected from specific resources, there is not accurate list order & thanks to all of them who written detailed description for specific commands.

There are always rumors that it will be phased out at some point, but that’s unlikely to happen any time soon.

The following are 21 of the best CMD commands you should know if you want to have more control over your Windows PC. 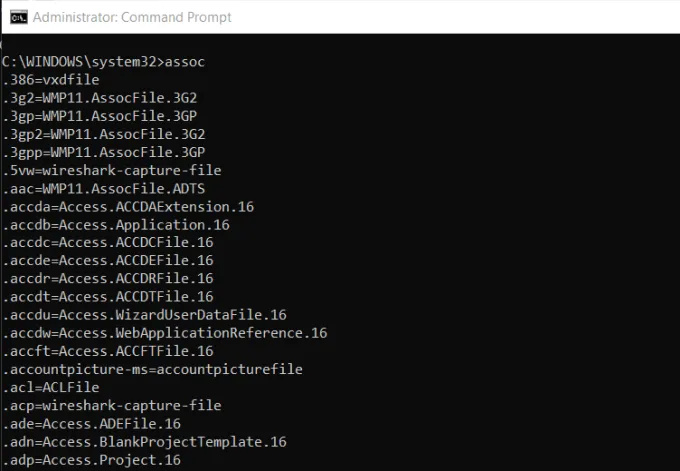 One of the most powerful tools in the CMD command library is the ASSOC command.

You can view all the file associations your computer knows about by typing ASSOC in the command window. You’ll see the file extension and the program it’s associated with.

You can set the association by typing something like assoc .doc=Word.Document.8 .

Sometimes when files are changed over time, it’s hard to remember what the differences were between versions. You may not know that a CMD command offers the ability to compare files and see all differences, but it’s true.

The FC command performs either an ascii or a binary file comparison and will list all of the differences that it finds.

Fc /b Picture1.jpg Picture2.jpg will do a binary compare on two images. 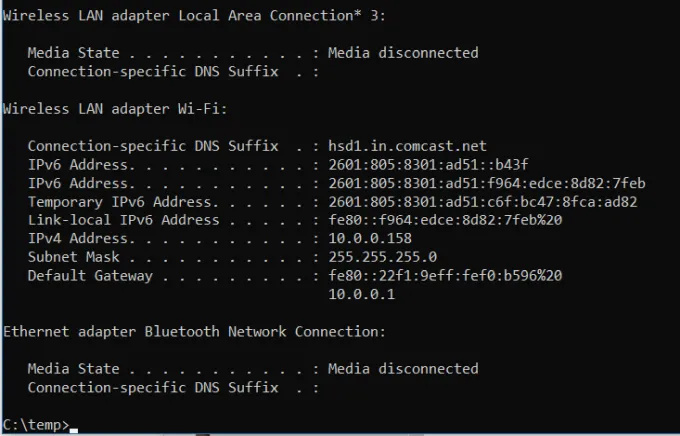 Network troubleshooting is never simple, but one command that makes it much easier is IPCONFIG .

Using this command in the CMD command prompt returns detailed information about your current network adapter connection including:

This information can help you troubleshoot router issues and other connection issues you could be having with your network adapter. 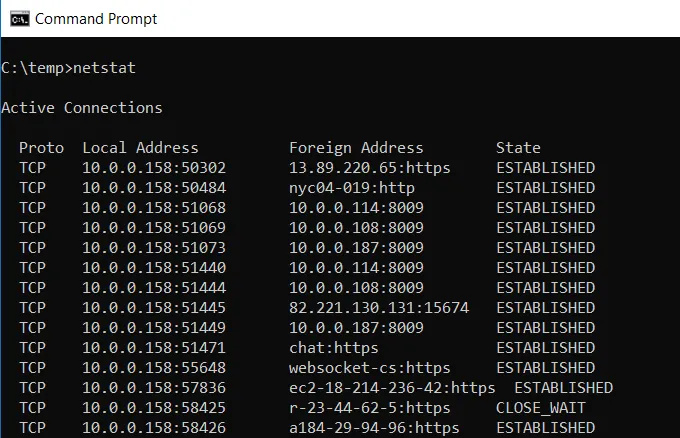 Concerned that you could have malware running on your computer that’s connecting to internet locations without you knowing about it?

If you run a NETSTAT command in the command prompt, you can get a list of all active TCP connections from your computer. 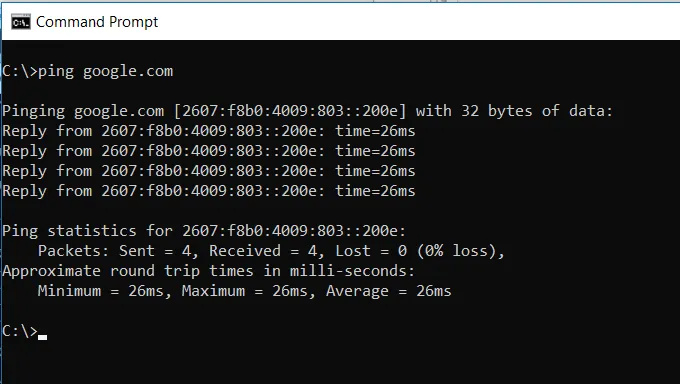 An IT Analyst’s best friend is the PING command. Running this command sends test packets over the network to the target system.

You can use the PING command to test whether your computer can access another computer, a server, or even a website. It can help with revealing network disconnections. It also provides transit time for the packets in milliseconds, so it also reveals a bad network connection as well. 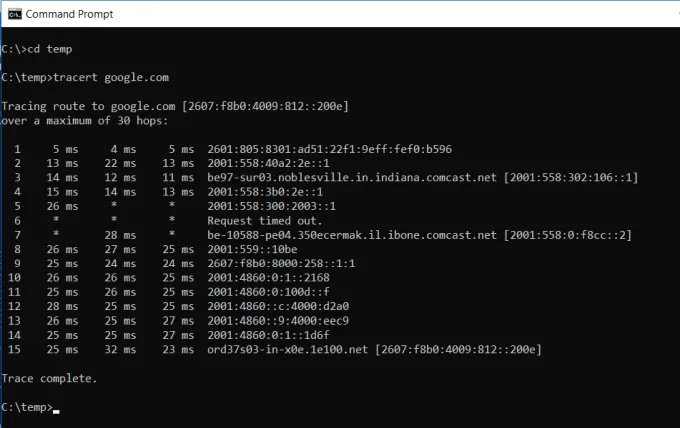 TRACERT is a fascinating Windows Command to use. If you’re ever curious to see the path your internet traffic takes to get from your browser to a remote system like Google servers, you can use TRACERT to see it.

The command stands for “Trace Route”, which sends packets out to a remote destination (server or website), and provides you with all of the following information:

TRACERT can reveal how the routes of your internet requests change depending on where you’re accessing the web. It also helps with troubleshooting a router or switch on a local network that may be problematic. 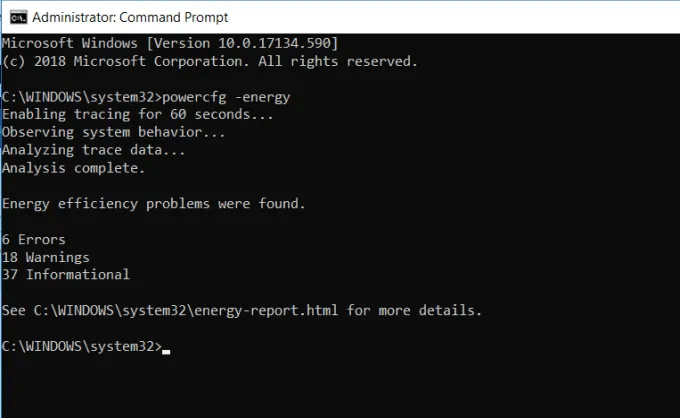 Are you frustrated with how quickly your laptop seems to run out of power? It could be that your power settings are configured as efficiently as possible. There’s a windows CMD command called POWERCFG (power configuration) that can help. Run the command prompt as an administrator and type powercfg – energy to get a full power efficiency report.

The process can take up to about a minute, but when it’s done, you’ll see whether there are any warnings or errors that might help you improve the power efficiency of your system. 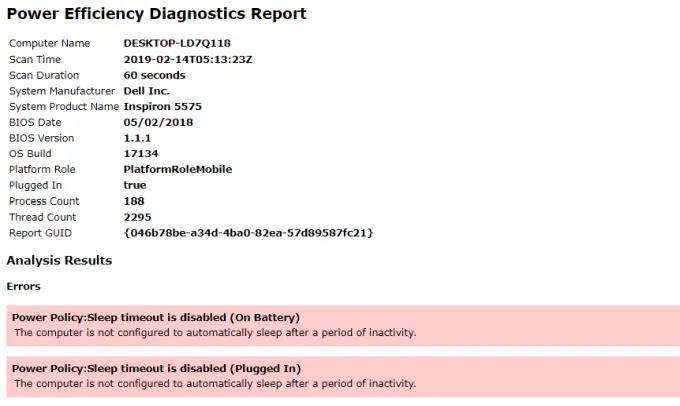 View the energy-report.html file to see the details of those errors and warnings. 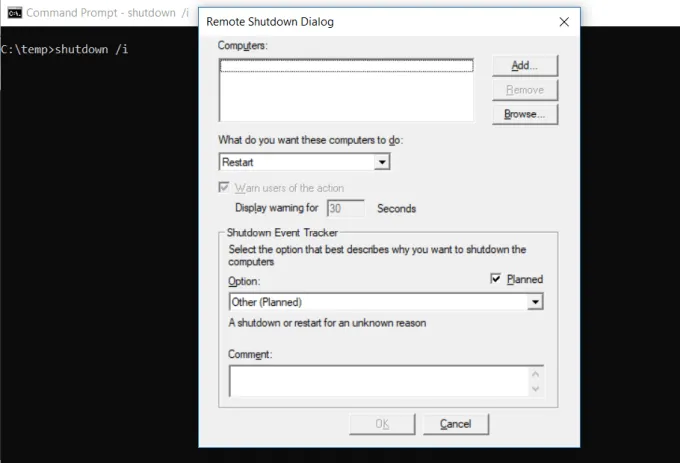 The SHUTDOWN command is a pretty versatile command that lets you shutdown the computer but control the behavior of that shutdown. It’s commonly used as a scheduled task or part of an IT batch job after patches have been applied to a computer system.

Typing shutdown /i from the command prompt will initiate a shutdown, but it’ll upon a GUI to give the user an option on whether to restart or do a full shutdown. If you don’t want to have any GUI pop up, you can just issue a shutdown /s command.

There is a long list of other parameters you can use to do a log off, hibernate, restart, and more. Just type shutdown without any arguments to see them all. 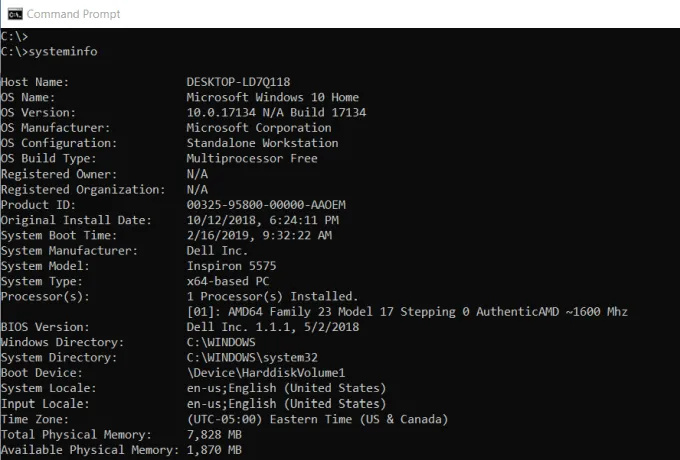 If you need to know what brand of network card you have, processor details, or the exact version of your Windows OS, the SYSTEMINFO command can help.

This command polls your system and pulls the most important information about your system. It lists the information in a clean format that’s easy to read.

You can also type msinfo32 in Run command to get system information.

If you’re ever concerned that a virus or some other software might have corrupted your core system files, there’s a Windows command that can scan those files and ensure their integrity.

You need to launch CMD as administrator (right-click and choose Run as Administrator ). Typing SFC /SCANNOW will check the integrity of all protected system files. If a problem is found, the files will be repaired with backed-up system files.

The SFC command also lets you do:

If you want to map a new drive, you could always open File Explorer, right-click on This PC, and go through the Map Network Drive wizard. However, using the NET USE command, you can do the same thing with one command string.

For example, if you have a shared folder on a computer on your network called [\OTHER-COMPUTER\SHARE](file://other-computer/SHARE/), you can map this as your own Z: drive by typing the command:

The persistent switch tells your computer that you want this drive remapped every time you log back into your computer.

While the SFC command only checks the integrity of core system files, you can use the CHKDSK command to scan an entire drive.

The command to check the C: drive and repair any problems, launch the command window as an administrator and type CHKDSK /f C: .

The command can fix any disk errors (if possible). When the command is finished, you’ll see a status of the scan and what actions were taken.

Windows comes with a wizard for creating scheduled tasks. For example, maybe you have a BAT file stored on C:\temp that you want to run every day at noon.

You’d have to click through the Scheduled Task wizard to configure this. Or you can type a single SCHTASKS command to set it up.

The scheduled switch accepts arguments like minute, hourly, daily, and monthly. Then you specify the frequency with the /MO command.

If you typed the command correctly, you’ll see the response, SUCCESS: The scheduled task “Example” has successfully been created .

There is no response when it’s successful, so unless you see an error message, the command worked.

DxDiag is a diagnostics tool used to test DirectX functionality and troubleshoot video- or sound-related hardware problems, helpful in troubleshooting technical concerns with a computer, results to get detailed information about the DirectX components and drivers installed on your computer. DirectX Diagnostic can save text files with the scan results as well.

As you can see, there are some powerful and useful things you can do with the Windows command prompt, if you know the right commands.

Believe it or not, there are even more commands that will give you the ability to do some things you probably never realized just by typing a simple command.

Here are similar and a few more: Popular CMD Commands Used for Hacking ✅ and here are the most known ones: All CMD Commands For Windows System!

To learn more and become a pro, Check out the full list of Windows CMD commands included in the latest version of the Windows OS.

Another great article. Thanks a lot @SaM

I still remember the time when you have to load Windows 3.11 and you have to work through the CMD back them.

(Yeah I know, I am THAT old