A ZIP archive may contain many entries whose content can be compressed and/or encrypted. In particular, entries can be encrypted with a password-based symmetric encryption algorithm referred to as traditional PKWARE encryption, legacy encryption or ZipCrypto. This algorithm generates a pseudo-random stream of bytes (keystream) which is XORed to the entry’s content (plaintext) to produce encrypted data (ciphertext). The generator’s state, made of three 32-bits integers, is initialized using the password and then continuously updated with plaintext as encryption goes on. This encryption algorithm is vulnerable to known plaintext attacks as shown by Eli Biham and Paul C. Kocher in the research paper A known plaintext attack on the PKZIP stream cipher. Given ciphertext and 12 or more bytes of the corresponding plaintext, the internal state of the keystream generator can be recovered. This internal state is enough to decipher ciphertext entirely as well as other entries which were encrypted with the same password. It can also be used to bruteforce the password with a complexity of nl-6 where n is the size of the character set and l is the length of the password.

bkcrack is a command-line tool which implements this known plaintext attack. The main features are:

You can get the latest official release on GitHub.

Precompiled packages for Ubuntu, MacOS and Windows are available for download. Extract the downloaded archive wherever you like.

On Windows, Microsoft runtime libraries are needed for bkcrack to run. If they are not already installed on your system, download and install the latest Microsoft Visual C++ Redistributable package.

Alternatively, you can compile the project with CMake.

First, download the source files or clone the git repository. Then, running the following commands in the source tree will create an installation in the install folder.

bkcrack is available in the package repositories listed on the right. Those packages are provided by external maintainers.

You can see a list of entry names and metadata in an archive named archive.zip like this:

Entries using ZipCrypto encryption are vulnerable to a known-plaintext attack.

Having a file cipherfile with the ciphertext (starting with the 12 bytes corresponding to the encryption header) and plainfile with the known plaintext, bkcrack can be run like this:

If the plaintext corresponds to a part other than the beginning of the ciphertext, you can specify an offset. It can be negative if the plaintext includes a part of the encryption header.

If you know little contiguous plaintext (between 8 and 11 bytes), but know some bytes at some other known offsets, you can provide this information to reach the requirement of a total of 12 known bytes. To do so, use the -x flag followed by an offset and bytes in hexadecimal.

If bkcrack was built with parallel mode enabled, the number of threads used can be set through the environment variable OMP_NUM_THREADS.

If the attack is successful, the deciphered data associated to the ciphertext used for the attack can be saved:

If the keys are known from a previous attack, it is possible to use bkcrack to decipher data:

It is also possible to generate a new encrypted archive with the password of your choice:

The archive generated this way can be extracted using any zip file utility with the new password. It assumes that every entry was originally encrypted with the same password.

Given the internal keys, bkcrack can try to find the original password. You can look for a password up to a given length using a given character set:

You can be more specific by specifying a minimal password length:

A tutorial is provided in the example folder.

For more information, have a look at the documentation and read the source.

Do not hesitate to suggest improvements or submit pull requests on GitHub.

This project is provided under the terms of the zlib/png license. 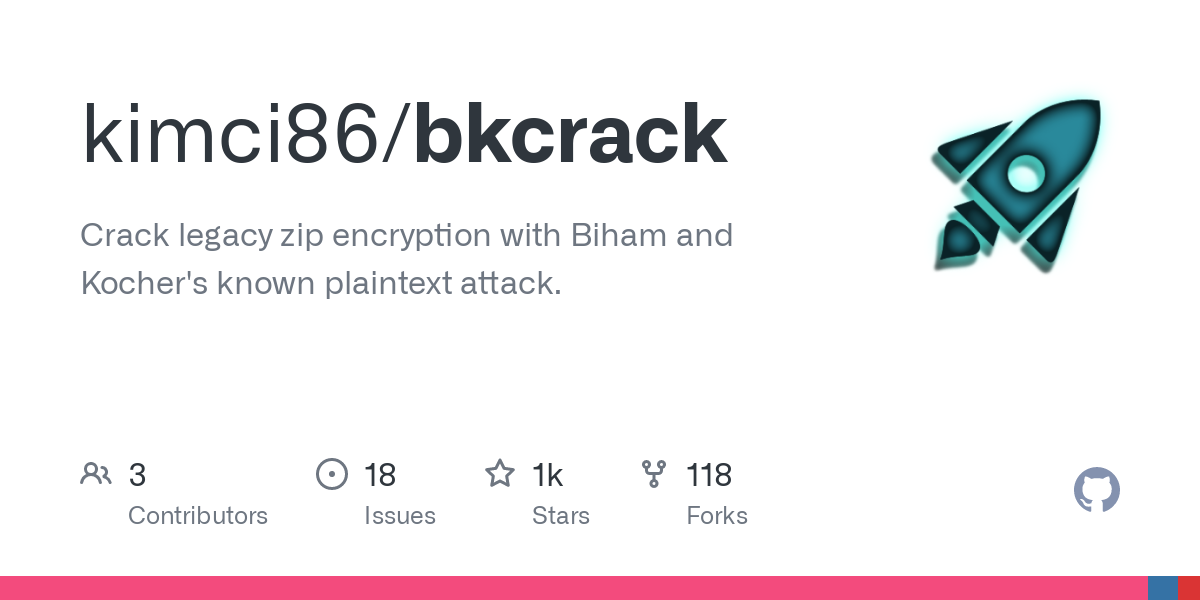