Android is the most popular and versatile operating system for smartphones in the present scenario which is also evident through the fact that it accounts for almost 86% of shares of sales in the smartphone market. The main reason behind such an escalated approach is being open source, flexible and highly customizable. Also, the availability of tons of applications by thousands of developers for the same is like icing on the cake.

Now, as an Android user, you might want to explore the endless possibilities for getting the maximum out of your Android device. Following the same, we are here with the best Android hacks and tricks you should know right now. These tricks and hacks will not only make you smarter but also change the way how you interact with your smartphone.

Let us begin with the list of 10 best Android hacks and tricks.

1. Install Linux on your Android Phone without Root 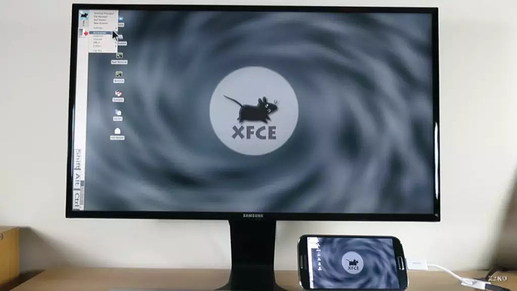 You might be surprised to know that it is literally possible to open the Linux interface and command prompt on your Android phone. Now, installing a Linux on Android has always been a tedious task and often requires root but here, we do have a way to do that without root or any special knowledge and skills.

By using Debian No root app, you can install Linux distribution Debian on your Android phone to get a few utilitarian things done. It is basically an operating system based on Linux which allows the user to install LibreOffice, GIMP, and other open-source software through APT (Advanced Package Tool) and make use of the same.

To do this, you just have to install the Debian No root app from the PlayStore, then just open it like any other application and allow it to download the full package for a complete installation. Once loaded fully, you will be welcomed by a mouse-oriented desktop interface where you can download and install certain programs or games just like on any other version of Linux. Nonetheless, there are endless possibilities to be explored in case if you’re bored with your Android.

2. Use your LED flash and Camera for Heart Rate monitoring 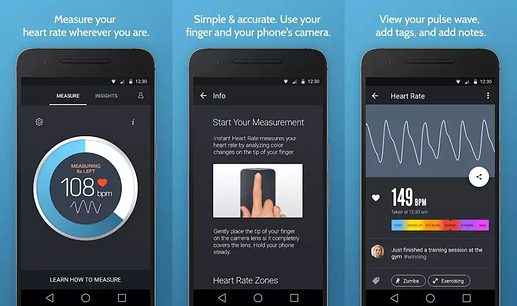 Yes, it is possible to monitor your pulse rate without the use of any fitness tracker or devices with a dedicated heart rate monitor. At once, it might seem like a gimmick or joke for you but it does actually work to a certain extent.

Now, there are many apps available that let you track your pulse rate. The ones which actually work require your finger to be placed on the LED flash after which the app uses the camera to track color changes under your skin to monitor the amount of blood passing through.

Given that this is software dependent, don’t expect much accuracy and make sure that the LED flash on your phone doesn’t reside too far from the camera lens. Also, use a good application for the same as the Instant Heart Rate app which we have used here for best results.

If in case you’re bored with your current status bar or plan of adding and removing certain options then you no longer need to rely on third-party apps.

You just have to enable the hidden settings menu called as “System UI Tuner” which can be done by holding the settings gear present in the Notification toggle menu. On doing the same, the gear icon will start rotating followed by a toast message confirming that System UI tuner has been enabled.

Now, you will be able to see the System UI tuner menu in the settings app where you can specify what sort of icons you want to appear in the status bar like indication for orientation, networks, headphones (this ain’t enabled by default on some phones), etc. You can further tweak extra settings for Do Not Disturb mode, notifications and Always On Display (if supported).

However, this hidden setting may not be present on phones with custom UI like EMUI/MIUI and older android versions. 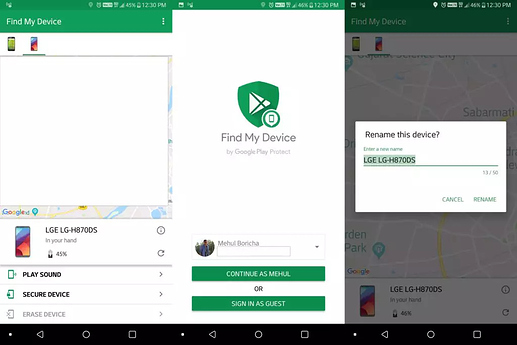 Ever lost a phone? if yes, then you might have had an awful experience as I did after losing my phone at the restaurant. At times, we misplace our phones and the worst part is if we kept them on silent, then there’s no other way you can get it back except using Google’s Find My Phone app.

The best part with Android is that if you added a Google Account to your Android device, then Find My Device is automatically turned on. So, whenever you lose your device, just head over to android.com/find in any browser and log in with the same Google account. Now, you can see the location of your device and can further erase all the data remotely, lock it down with a message or make it ring loud (even if it’s in silent mode), provided that your lost device has access to the internet and location is on.

5. See back the Notifications you Swiped Away

Ever cleared all your notifications in a hurry without reading them properly? Yeah, I know that happens quite often and later comes the realization that you might have missed something important, maybe something from an app which you don’t know, in such case will you waste your time opening every app to recheck notifications? Well, we have a solution for that as well.

Simply long-press and hold on your home screen to show up the screen-adjusting mode. Now, tap on widgets and look for the Settings shortcut widget which should look like a basic settings gear. Next, drag it to somewhere on your home screen which will be followed by a popup list allowing you to choose from essential shortcuts like accessibility, app info, battery, devices, battery, memory, etc. Just search for the option named “notification log” and select it.

After which you can view all your previous notifications from all the apps with the time of appearance using the shortcut.

Pro Tip: You can also use this trick to read the Whatsapp messages which have been deleted by the sender using Delete for Everyone option.

6. Use the Navigation-Buttons as App shortcuts 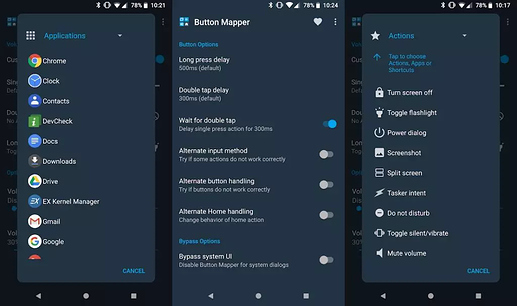 Ever thought of using the navigation bar for something more than just going home, closing apps and opening recent apps? The Button Mapper app offers the functionality to use the same buttons for triggering different applications and tasks.

You can remap your keys to assign apps based on your actions like double-tapping either of home, recent and back button. I did it for deploying double-tap the home button to trigger the camera app and double-tap the recent buttons app to open Gmail. Moreover, you can also customize your volume and headset buttons for the same cause.

Interestingly, this app also allows customizing the Active Edge feature on the supported devices like the Pixel 2 and the Pixel 2 XL.

In certain phones, the manufacturers give the charging port and headphone jack on the bottom frame which halts the user experience when using the phone when plugged in or listening to music using wired earphones while lying flat on the bed. This is where the Adaptive Rotation Lock app comes to rescue.

It is a very lightweight and ad-free app that lets you manually set the orientation of content being displayed on your screen. You can switch between Reverse Portrait (upside down), Force Landscape, Reverse Landscape and Force Auto options from notification toggle, giving you the freedom to use your device normally even if you are holding it upside down.

It is also helpful for certain apps and especially home-screen which don’t support the default rotation system natively.

8. Lower the Display Resolution of your Phone 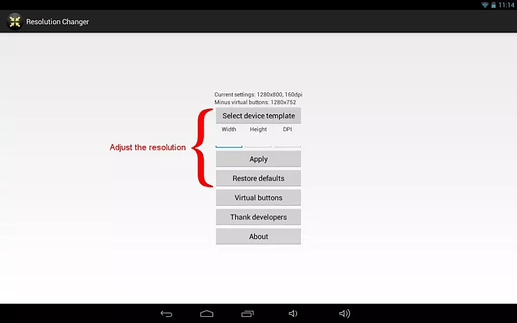 Lowering the display resolution is a great workaround for saving battery that is being eaten up by those extra pixels. Also, the higher resolution may lead to lagging and heating issues while playing high intensive games which usually stress the processor.

Therefore, you may want a lower resolution than what your device offers natively. For this, we have two methods: one requires root permissions while others don’t. If you’re already rooted then simply install the Resolution Changer app from Play Store and tweak the resolution and pixel density.

But if you are hesitant towards rooting your device then there’s another method too which requires a computer (Windows, Linux, or Mac) and allows you to change the pixel density and resolution using ADB commands (without root).

Note: Some manufacturers like Samsung and Huawei/ Honor provide an inbuilt option for the same.

9. Reduce Lag and Delays on Android 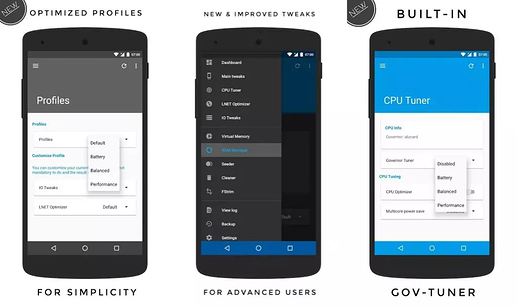 If you have a significantly old & low-end device, then you might face lagging and freezing problems quite often while using it. It might even lag while performing basic tasks like calling or using Whatsapp. In such a case, you might think that it is due to aging of the device, well, in a word it’s true but can be rectified using a simple workaround.

Technically, Android draws from a predefined set of random data for performing most of the operations. When the device runs out of this entropy pool, it has to rebuild itself causing delays in opening apps.

This issue can be solved by using the Seeder app which takes the process that generates data and performs it every second. Then it feeds that info to a new random data pool and keeps refreshing it regularly and further uses that data to keep the system pool juiced up so that it never runs out. This results in faster app launches, lag-free animations, and reduced navigation lag.

Note that this app requires ROOT and isn’t compatible with the newer versions of Android. In such a case, you can also try the L Speed app for speeding up your Android phone.

For people who are not willing to root their smartphones can enable developer options by tapping 7 times on the build number in About device section, after which you can reduce the animations speed by 0.5X or even disable them completely. This will significantly reduce animation lag and make your device faster.

Want to churn out the maximum speed and gaming performance from your Android device? then you must try the GLTools (graphics optimizer) app once.

This app requires root permissions to work and lets you squeeze better performance on lower-end devices by fooling it like if you’re running a different processor. Also, you can tune in your graphics for better visuals and better dynamic range in games.