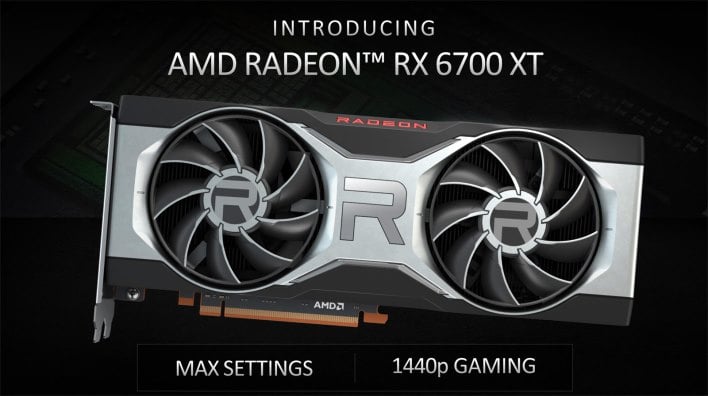 AMD announced a new member of its Radeon RX 6000 series graphics card line-up today, dubbed Radeon RX 6700 XT. Based on AMD’s RDNA 2 GPU architecture, the Radeon RX 6700 XT targets high frame rate 1440p gaming at max image quality with an MSRP of $479. The new GPU has 40 Compute Units (CUs) with 40 Ray Tracing Accelerators, 96MB of on-chip Infinity Cache, and 12Gb of GDDR6 memory. Game Clocks of up to 2424MHz will be possible and board power is rated for 230 watts. Versus NVIDIA’s current competitive offerings, AMD is claiming wins for the Radeon RX 6700 XT across many titles at 1440p/max settings versus the GeForce RTX 3060 Ti and RTX 3070, but with the added benefit of a larger 12GB frame buffer, which should add a measure of future-proofing as games get more graphically complex. Finally, AMD also revealed that it will be doing something a bit different with the launch of the Radeon RX 6700 XT. AMD-built reference cards will be available directly from AMD.com and numerous partner boards will be available from retailers and system builders, all on March 18th.