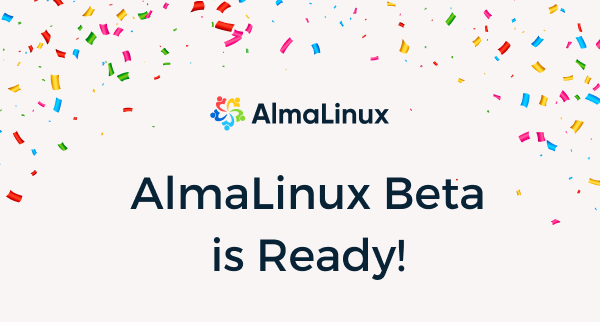 AlmaLinux describes itself as “an open-source, community-driven project that intends to fill the gap left by the demise of the CentOS stable release.” And now AlmaLinux “has announced their beta release of their CentOS/RHEL 8 fork,” writes Slashdot reader juniorkindergarten.

AlmaLinux will be getting $1 million a year in development funding from CloudLinux (the company behind CloudLinux OS, a CentOS clone with over 200,000 active server instances). Their CEO stresses that AlmaLinux “is built with CloudLinux expertise but will be owned and governed by the community. We intend to deliver this forever-free Linux distribution this quarter.” And they’ve committed to supporting it through 2029.

Their press release touts AlmaLinux as “a 1:1 binary compatible fork of RHEL 8, with an effortless migration path from CentOS to AlmaLinux. Future RHEL releases will also be forked into a new AlmaLinux release.”

From the AlmaLinux blog:We’ve collected community feedback and built our new beta release around what you would expect from an enterprise-level Linux distribution…inspired by the community and built by the engineers and talent behind CloudLinux. Visit https://almalinux.org to download the Beta images.

With the Beta release deployed, we’d like to ask the community to be involved and provide feedback. We aim to build a Linux distribution entirely from community contributions and feedback. During AlmaLinux Beta, we ask for assistance in testing, documentation, support and future direction for the operating system. Together, we can build a Linux distribution that fills the gap left by the now unsupported CentOS distribution.
On Wednesday they’ll be hosting a live QA webinar with the AlmaLinux team. And there’s also a small AlmaLinux forum on Reddit.