Every business has a website or native mobile app, or even both. However, websites are limited in functionality, and native app development requires significant investment. So, where is the golden mean? The answer is Progressive Web Apps (PWA). They cost less than native apps but support features like push notifications, offline mode, and others.

This post will explain what PWA websites stand for, their core benefits, and what technology to use to turn a regular website into a progressive web app. written by Vitaly Kuprenko

Progressive web applications are one of the types of web application architecture that developers use to implement the client- and server sides of the product. They stand for websites that deliver an experience indistinguishable native apps.

They can be installed like native mobile applications, work without connection, interact with the device camera, or receive push notifications. Moreover, PWAs offer much better distribution than app stores and don’t take a tidbit of your revenue.

When progressive web apps first hit the scene in 2015, they were available on Android. Later, in 2018 they were accessed by iOS users.

Alex Russell, a Google software developer, who introduced the PWA term, says: PWAs are just websites that take all the right vitamins.

Progressive web applications are written to run on different browsers, so programmers use HTML, CSS, and JavaScript to make PWAs. If the users open PWA on a desktop browser, it will look like a traditional website. But in the mobile browser, they will experience native app features.

When users are on a PWA website, they encounter a pop-up requesting to install the app on their smartphone. After the user installs the PWA, the app icon appears on the home screen. When a user opens a progressive web app, the browser will open a new window instead of a new tab. 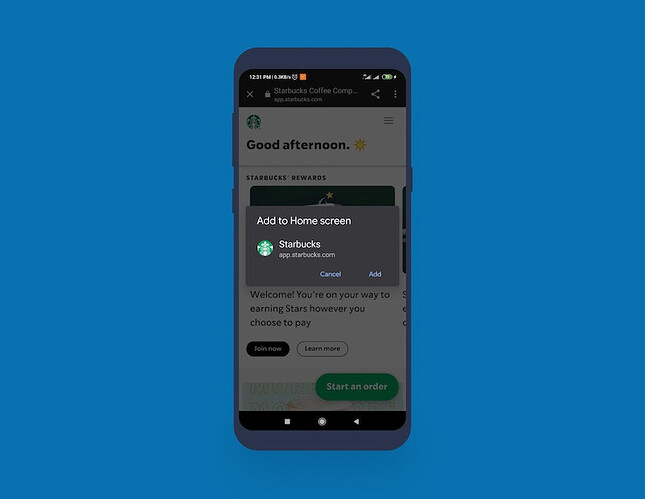 After it’s installed, PWAs make a website cache. This contributes to increased speediness and offline availability.

The situation slightly differs for iOS users, though. Apple focuses more on native app development rather than progressive app one. It doesn’t mean that PWAs don’t run on iOS; there are only some limitations. For instance, Safari (Apple’s browser) doesn’t support PWA’s push notifications.

How Businesses Can Benefit From PWAs

One of the core benefits of PWAs is their price. So even if you already have a website, you’ll still spend less time and money to turn it into a progressive web app.

Let’s discuss the other advantages of PWAs: 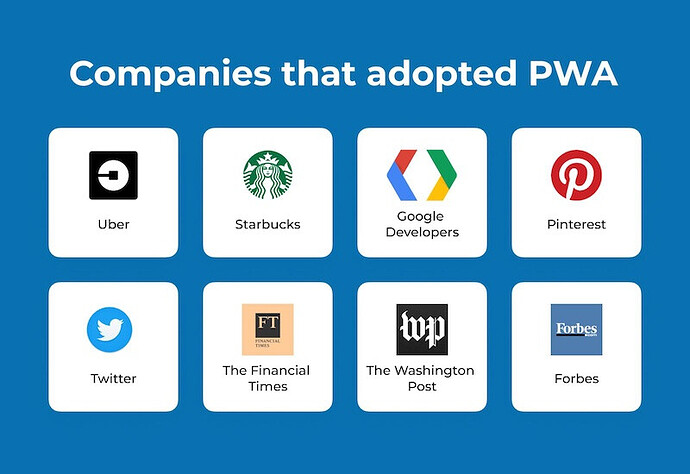 Companies like Starbucks, Uber, Tinder, Forbes, Pinterest had already gained from PWA implementation. For example, Starbucks increased daily active users 2x. Orders on desktops are almost the same as on mobile apps. Pinterest has noted a 40% increase in time spent on the website. Tinder reduces load time from 11 to 4.69 seconds.

Progressive web applications don’t require particular frameworks or any other development tool. PWA is a technology that can be implemented after completing some project requirements.

In order to convert a traditional website into a progressive web app, you’ll need to add a manifest.json file and a service worker.

The Service worker is a PWA technique that is utilized for resource caching and push notifications. It’s a programmable mediator between your web app and the real world that gives you control over network queries.

For instance, you can manage the caching behavior of queries, handle push notifications, enable offline mode and background synchronization.

Since service workers’ files run separately from the core browser, they don’t depend on the connected app. That’s why users can get notifications from a server when the web app is offline.

The server worker holds the resources for the app, allowing for retrieving data when the users are offline. The server refreshes dynamic content (images, videos, payment history, etc.) when the Internet connection is renewed. Users’ actions on the page are delayed until the connection is stable.

Let’s say a user wants to send a message via PWA messenger. The website is still running; a message history is accessible. But they need Wi-Fi to complete the action, send and get a message.

When users have a website and Internet connectivity, they can fulfill different actions such as sending messages or making a transaction. Which you already know.

The problem is when users don’t have an Internet connection. In this case, they still have access to the app, but they can’t continue working with the application. The service worker stores the information while customers are offline.

Here is the picture of how progressive web applications interact with server workers. 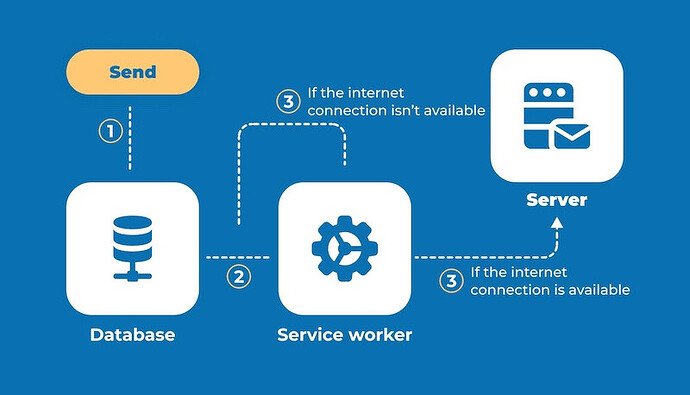 Using the manifest, software engineers can control the following:

The picture below shows what PWAs can do with the manifest file. 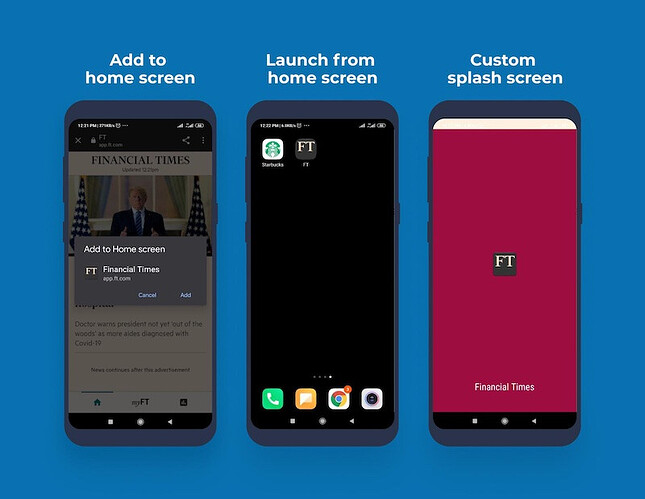 As you can see, progressive web applications bring significant advantages to all service-based businesses due to their usability and cost. They are easy to design, thus, budget-friendly. Even though such software solutions have some feature restrictions, especially for iOS users, they are still a good option to start with or extend your current website.