7 Fun Hidden Google Games You Can Play For Free

Time seems to slow down when you’re bored and can’t find ways to pass the time. Thankfully, Google has you covered—you don’t need a gaming PC or console to hand, as Google has secret mini-games in almost all of its products, from Chrome and Search to Google Earth.

These include old favorites like Pac-Man and Tic-Tac-Toe, as well as some Google originals like the hidden dinosaur game. If you’re bored, struggling with ways to count down the hours, and desperately avoiding the day job, then these hidden Google games could be the answer. Here are 7 games you can try right now.

Flight Simulator is the game that every aviation geek has installed on their PC, but it’s a niche experience for most users. If you’ve ever been curious about getting in a cockpit and flying your own airplane, you don’t need a copy of Microsoft Flight Simulator to do it—all you need is the hidden Google game Google Earth Pro installed on your PC. 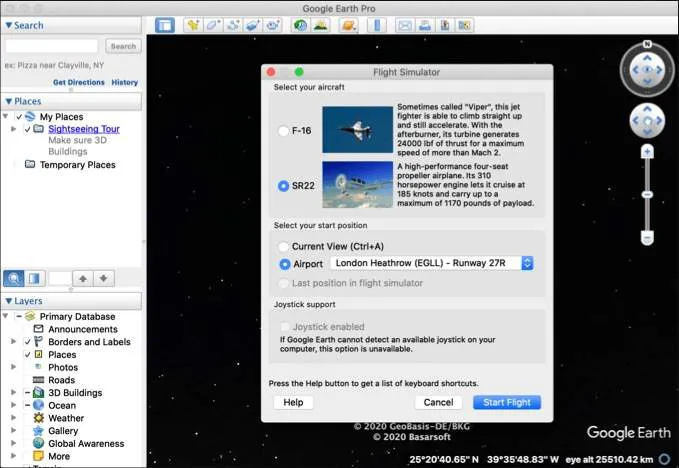 To play Flight Simulator, all you need is to launch Google Earth Pro and press Ctrl + Alt + A to launch the Flight Simulator window. It allows you to choose your aircraft and start location, as well as allowing you to control the simulator using a joystick.

Give it a go—it’s completely free to play. Like the Microsoft equivalent, Google Earth Flight Simulator is a pretty difficult “game” to get your head around, but it’s also a fun way to explore the planet without leaving your home.

If you’ve ever wondered why you see a dinosaur in Google Chrome whenever you lose connection trying to access a page, wonder no longer. This is actually a fun little built-in hidden Google game for you to try.

In the spirit of other endless runner games like Temple Run, the Google dinosaur mechanics are very simple to master. When you can’t connect to a page and you see the Google dino, press the space key on your keyboard to launch the game. 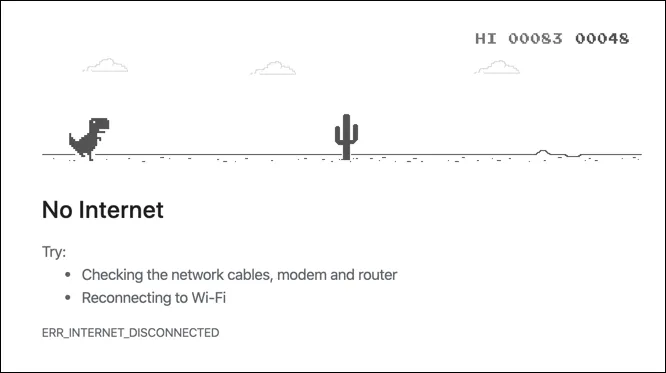 The dinosaur will move along—when you reach an obstacle (in this game, it’s cacti), simply press the space key at the right moment to jump.

It’s as simple as that. If you can’t access the page, don’t worry, because you can access a clone of the game for free online.

Another Google Search hidden game is the classic Solitaire game (known as Patience in some locations). If you’ve ever been bored on a Windows PC, you’ll probably be familiar with this card game. 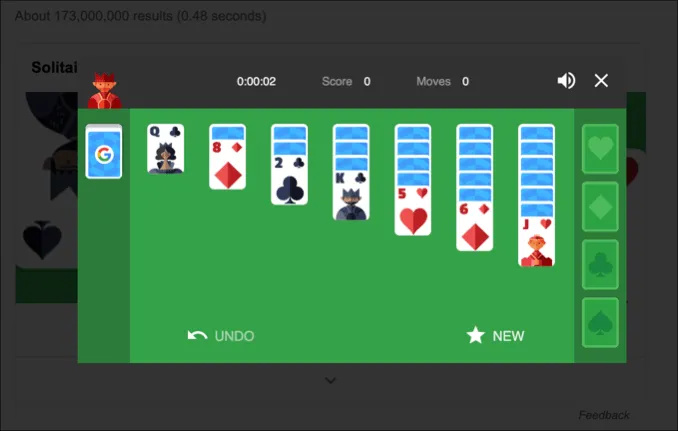 To play it, type solitaire (or patience game ) into Google Search on any browser and press the Play button. You can choose to play either the easy or hard difficulty modes by pressing on one of the options.

Once the game is running, it’s the standard Solitaire experience—simply drag and sort the cards according to the rules. If you fancy a desktop version of this classic game, there are also software versions of Solitaire available for you to try on Windows, too.

If you’re looking for a hidden Google Android game, then give Clouds a try. This casual game will only appear when you try to make a search on Google in the Google Android app while your device is offline.

Once you do, you’ll spot an animated icon next to the No signal warning. Press it—this will launch the full-screen Clouds game for you.

Clouds is a game in the Flappy Birds style, so to play it, tap your touchscreen to start the game, then to keep the happy-looking cloud icon in the air. You’ll need to avoid obstacles (birds, in other words), so be sure to plan ahead once you spot them.

You’ll need the Google app to play it, which most Android devices should have pre-installed. If you haven’t got it, install it, turn the WiFi off and give it a go.

No extended explanation needed for this one—everyone is familiar with the joy a quick game of Pac-Man can give you. This simple, easy and fun classic is available for you to play right now in any browser. 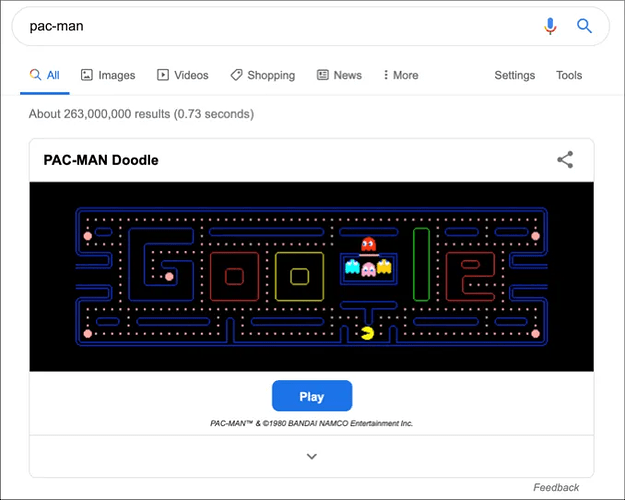 To play Pac-Man, all you need to do is search for pacman or pac-man in a Google search. Instead of a typical search snippet or video, Google will instead provide you with a playable, HTML5 version of the classic Pac-Man game at the top of the search results.

Just press the Play button to get started, then use your keyboard arrow keys to move.

For many years, Google has switched up its logo for new art and entertainment to celebrate events. Originally, these were just images, but as web tech has improved, these have evolved into fully-fledged interactive experiences.

Quite a few of these past Google Doodles (as they’re called) have been fun little mini-games, which are still playable over at the Google Doodles archive. There are plenty of games to try, from snowball fights to a Rubik’s cube, as well as one of our favorites—a basketball game to celebrate the 2012 Olympics.

You don’t need anything special to play these, as all you need is your browser. Head over to the Google Doodles archive to try out these existing hidden Google games to pass the time.

Many of the games we’ve mentioned in this shortlist have been visual experiences, but if you’re seeking a text-based adventure, you need to try the secret adventure game included in Google Search.

You’ll need to use the hidden Google Chrome console to use this. First, search for text adventure in Google Search, then right-click the browser window and press Ctrl+Shift+J to open the browser console. In the console terminal, type yes and press enter to begin playing the game. 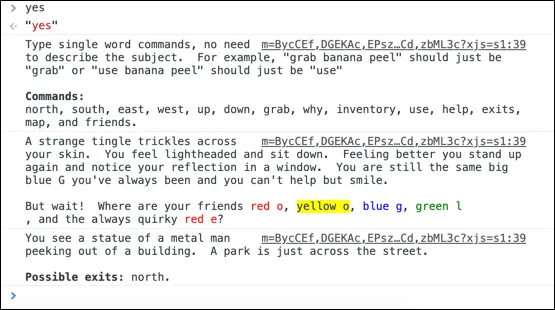 Like the classic text-based adventures of the 1980s and 1990s, you’ll need to follow the on-screen instructions to play, moving the game forward by using the commands shown in the console.

This old-school adventure is all about nostalgia—if it sounds like the game for you, give it a try today.

Having Fun with Hidden Google Games

Thanks to hidden Google games, you don’t need to download Steam or buy a console to have some casual gaming fun. Make the most of Google games like Solitaire, Tic-Tac-Toe, and Flight Simulator to kill some time on mobile and PC.

Of course, if you’re looking for some real gaming entertainment, you’ll need a gaming PC or console ready. If that’s unaffordable, subscribe to a game streaming service like GeForce Now instead.